“Put some effort into this. You’ll be glad you did,” one Bobcat athlete said to a first-year teammate.

The occasion was the annual Athletics photo session to create head-and-shoulder portraits — pretty much unchanged since Robert Cornelius created the first photo portrait in 1839 — to populate online rosters and awards stories.

“We always have so much fun watching each other do crazy photos — the more absurd, the better.”

But that’s only half the game. After their roster portrait is done, photographer Brewster Burns encourages the Bobcats to let it all hang out, celebrating both self and team by posing for stylized “sportraits” — poses and props of their choosing, with teammates often helping out.

Student-Athlete Celebration
The Class of 2020 Bobcats are in the spotlight tonight
with a virtual sports awards ceremony at 7 p.m. The college’s virtual Commencement ceremony is at noon on Sunday, May 31.

It all creates a fun team event, says Julia Panepinto ’20 of Buffalo, N.Y., a two-sport athlete in softball and volleyball.

“We get to be together for an hour, talking about our season to come. It’s the first time you put on your uniform, and it definitely has a game-day feel,” she says. “We always have so much fun watching each other do crazy photos — the more absurd, the better.”

Below are a few of our favorite 2019–20 sportraits. Enjoy! (None of the photographs have been digitally changed, aside from accepted practices of sharpening and exposure adjustment.)

Dan Waterland ’22, a swimmer from Chadds Ford, Pa., found a fun way to show how swimmers work out, donning all kinds of training gear at once: paddles, snorkel, fins, and a resistance parachute.

“We don’t just jump in the water and swim laps. We use equipment just like other sports to help us perform better. We like to have fun, too!”

(About that gear: a snorkel helps a swimmer with body position; paddles help a swimmer “catch” the water better; the parachute creates resistance during training; and the fins help a swimmer move faster, creating a race-like feel.) 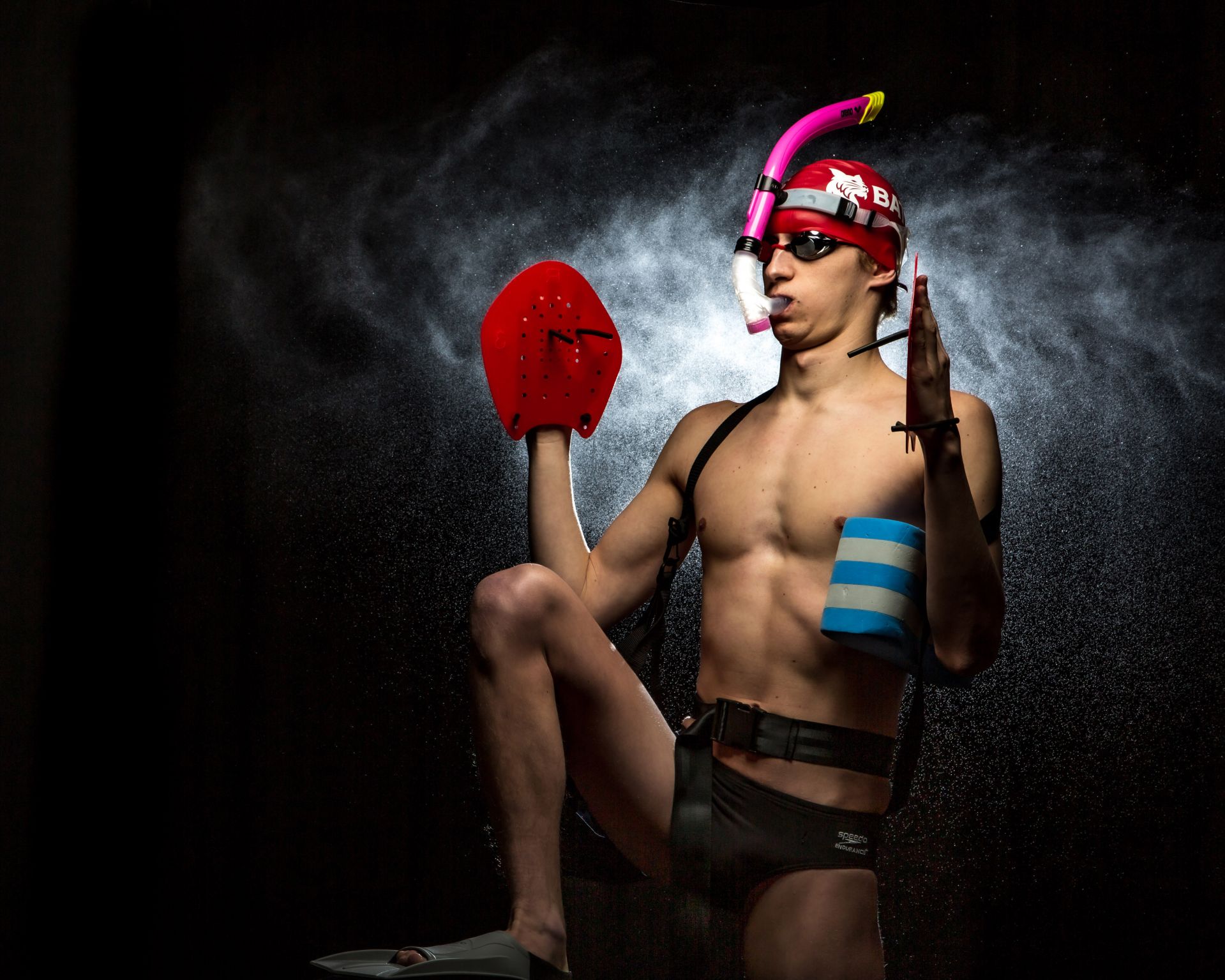 For her senior-year softball portrait, co-captain Julia Panepinto ’20 of Buffalo, N.Y., gave a fist-pumping yell as teammates tossed balls into the frame.

The photo session was held in February before the COVID-19 pandemic put a stop to the spring season and the rest of the in-person Bates experience.

Still, Panepinto holds tight to the feeling she had at that moment: “It’s a celebration: how I feel about this team, this sport, this program, and this college. It’s the high energy and intense, competitive spirit I hope to leave with the softball team.” 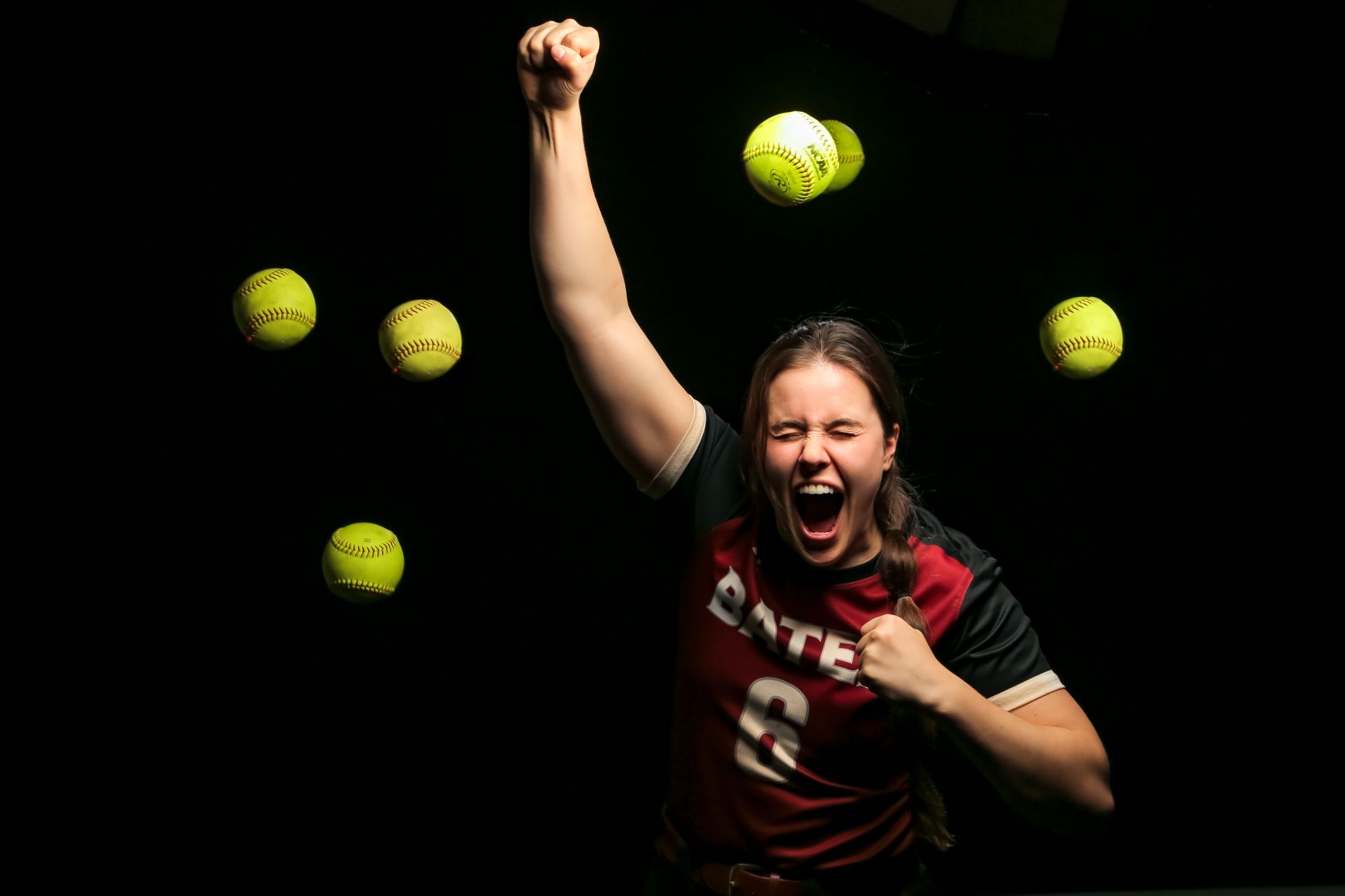 Home on the Range

Golfer Preston Haugh ’21 (right) of Alexandria, Va., pretended to get a distance to the pin on his rangefinder. Completing the portrait are Nick Beati ’20 (left) of Chelmsford, Mass., and Jim Stevens ’20 of North Kingstown, R.I. 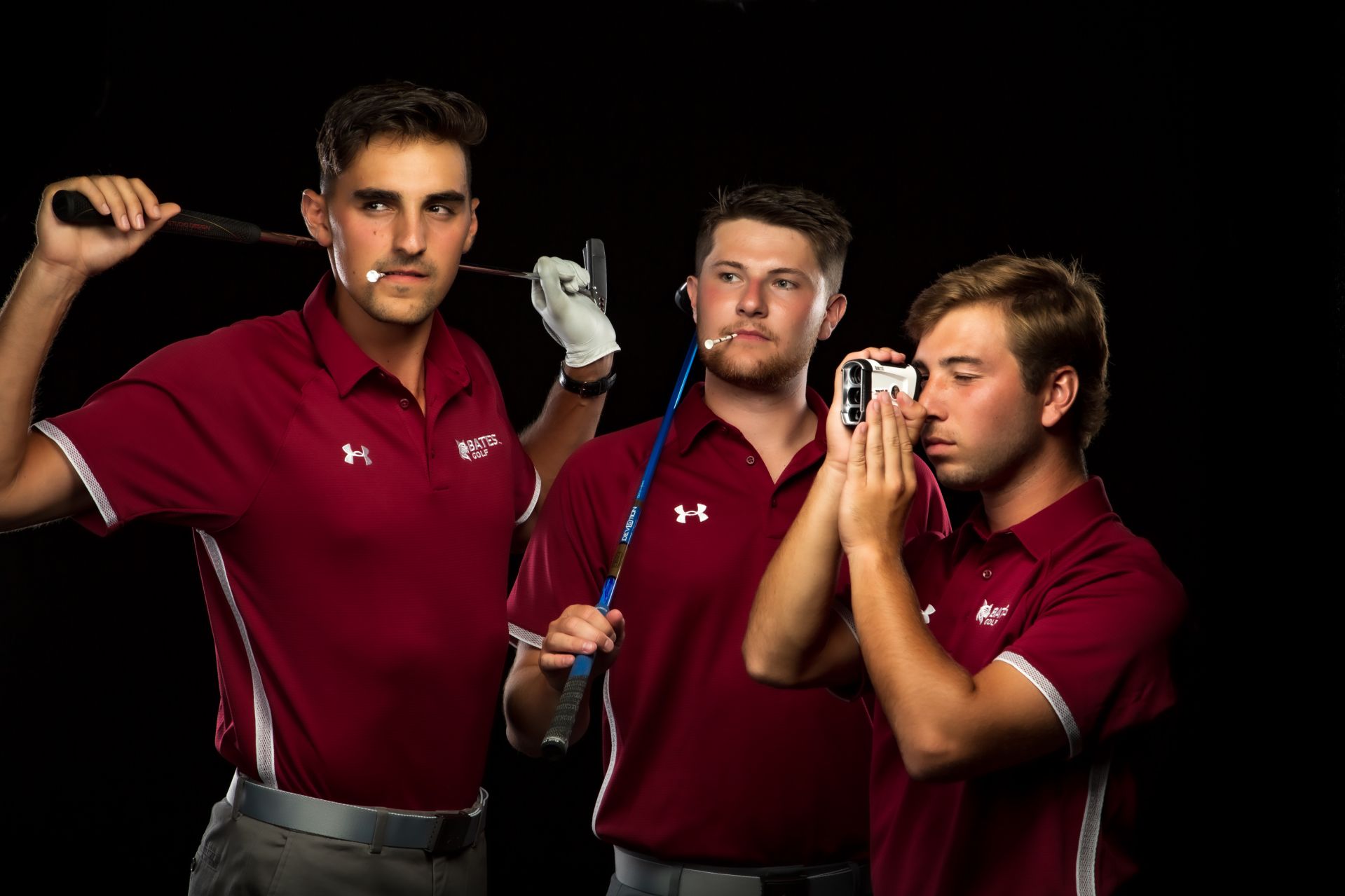 As the photo was taken, “we all fell away as if a sea were parted and a Bobcat emerged from the depths above all other sea creatures,” says Erard-Stone, a geology major from Richmond, Va. One of the tallest members of the team, she’s at top center with arms outstretched, giving a big hug to the entire team. 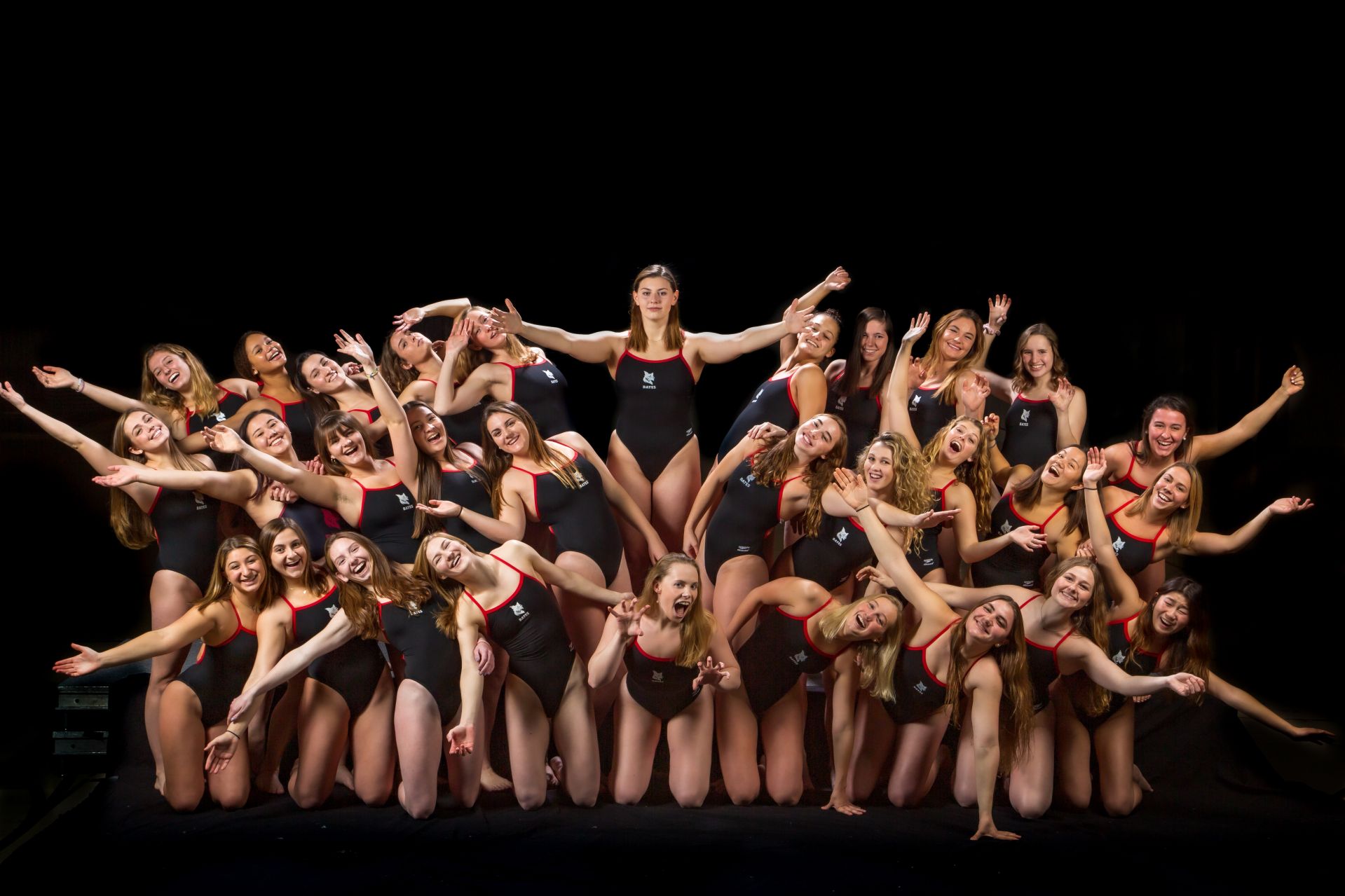 Mohamed Diawara ’23, a receiver on the football team, says that his sportrait pose “shows everyone that I’m finally here and the ball is in my hands.”

The pose also says thanks to his coaches for putting him “into a position to make plays. Giving me the ball is all I could ask.”

“Being an inner-city kid from Philadelphia, it’s very tough,” he says. “I had to overcome a lot and work hard to get to Bates. It’s a blessing to get to play college football, as many people never get that opportunity, and I just wanted to make the most of it.” 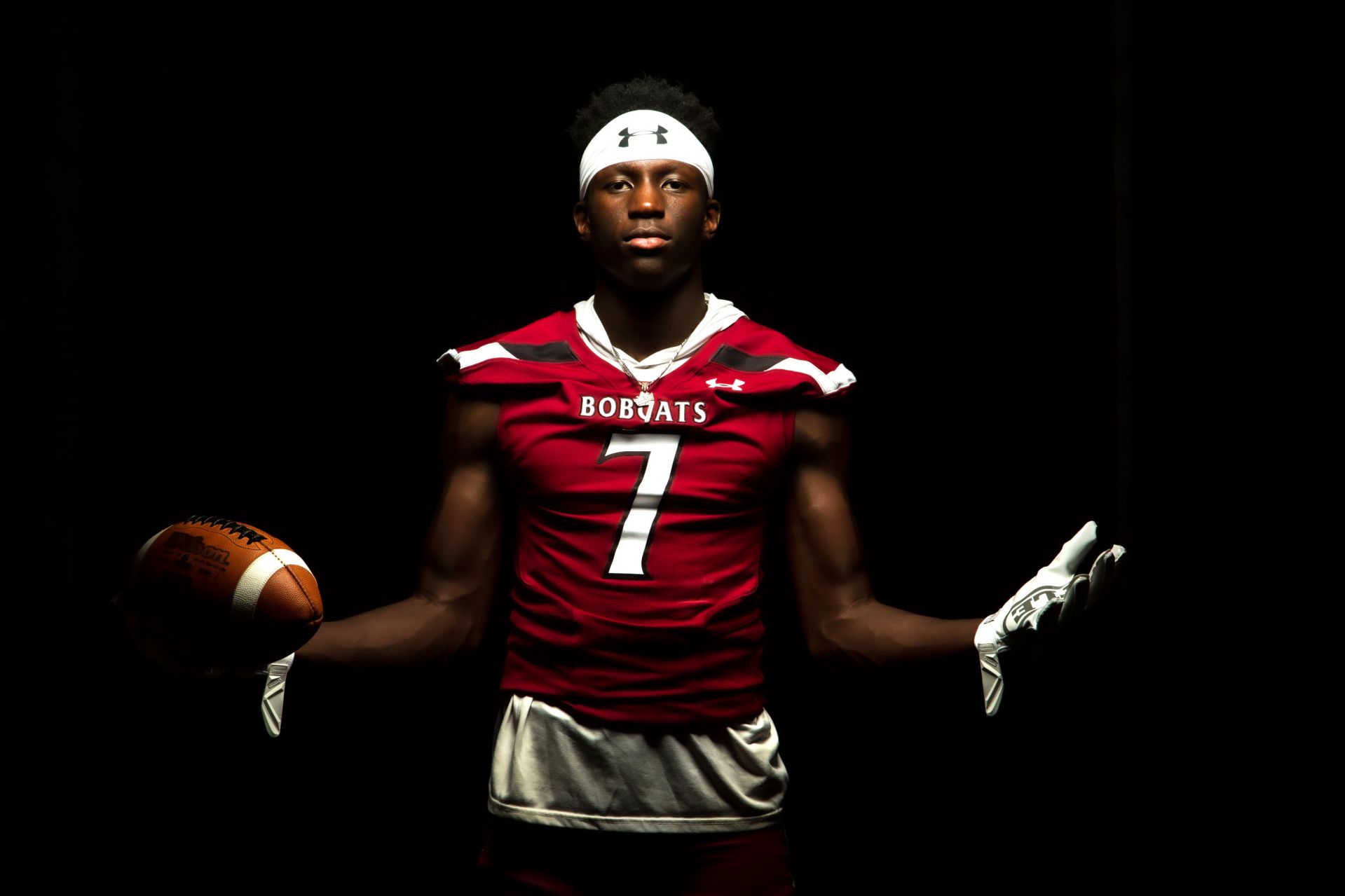 “We are fearless and loud and unapologetically ourselves.”

Winner of three NCAA team championships during her Bates career, Fitts was a second-team All America selection by the College Rowing Coaches Association in 2019. 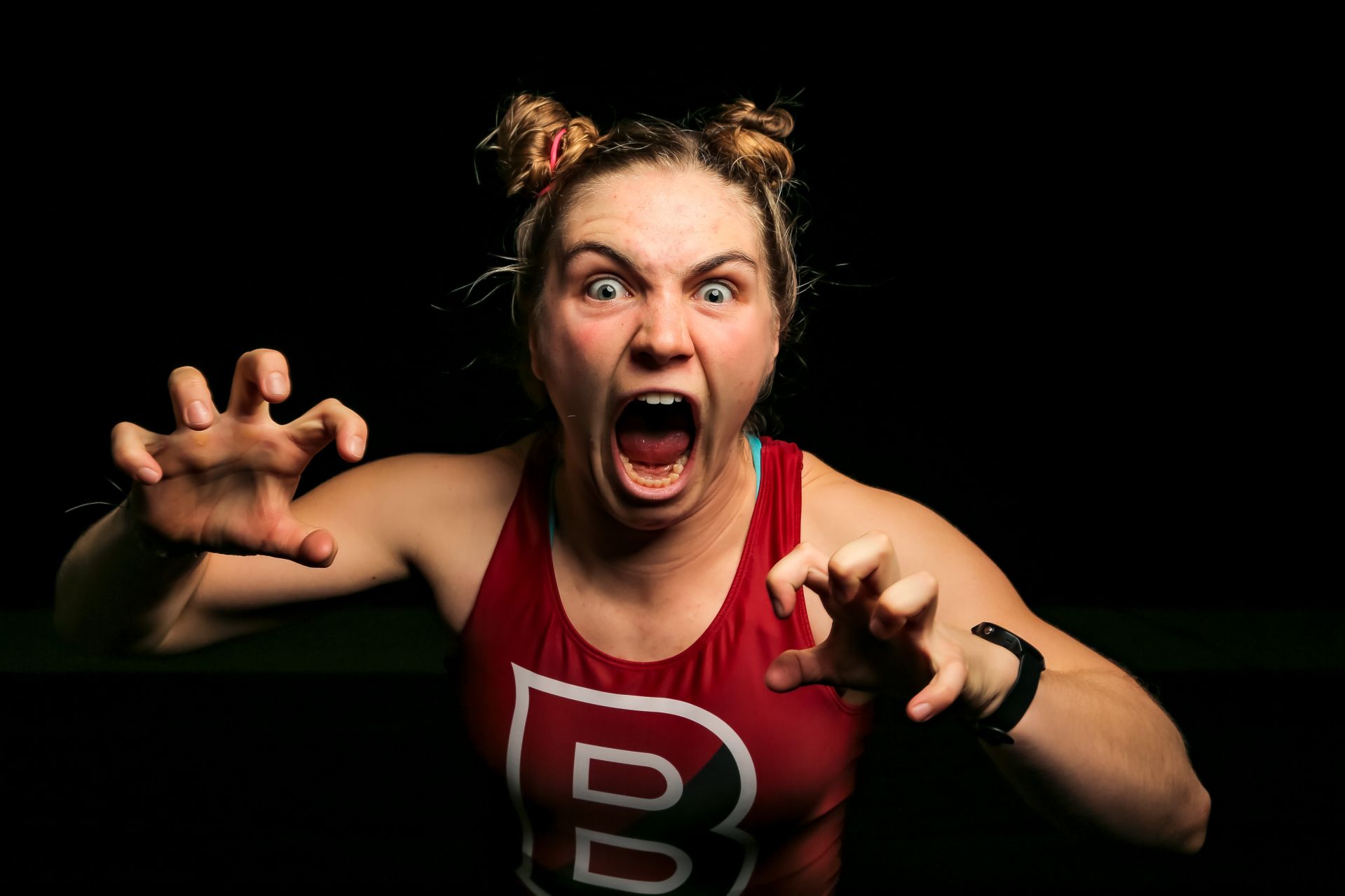 The men’s lacrosse players who handle faceoffs are specialists, known as “X men” because the faceoff takes place on a small X at midfield.

X men trot onto the field for the faceoff, battle mightily for the all-important possession, then scamper off for an immediate substitute.

To evoke that high-intensity of their work, Bates’ X men created this wild sportrait. 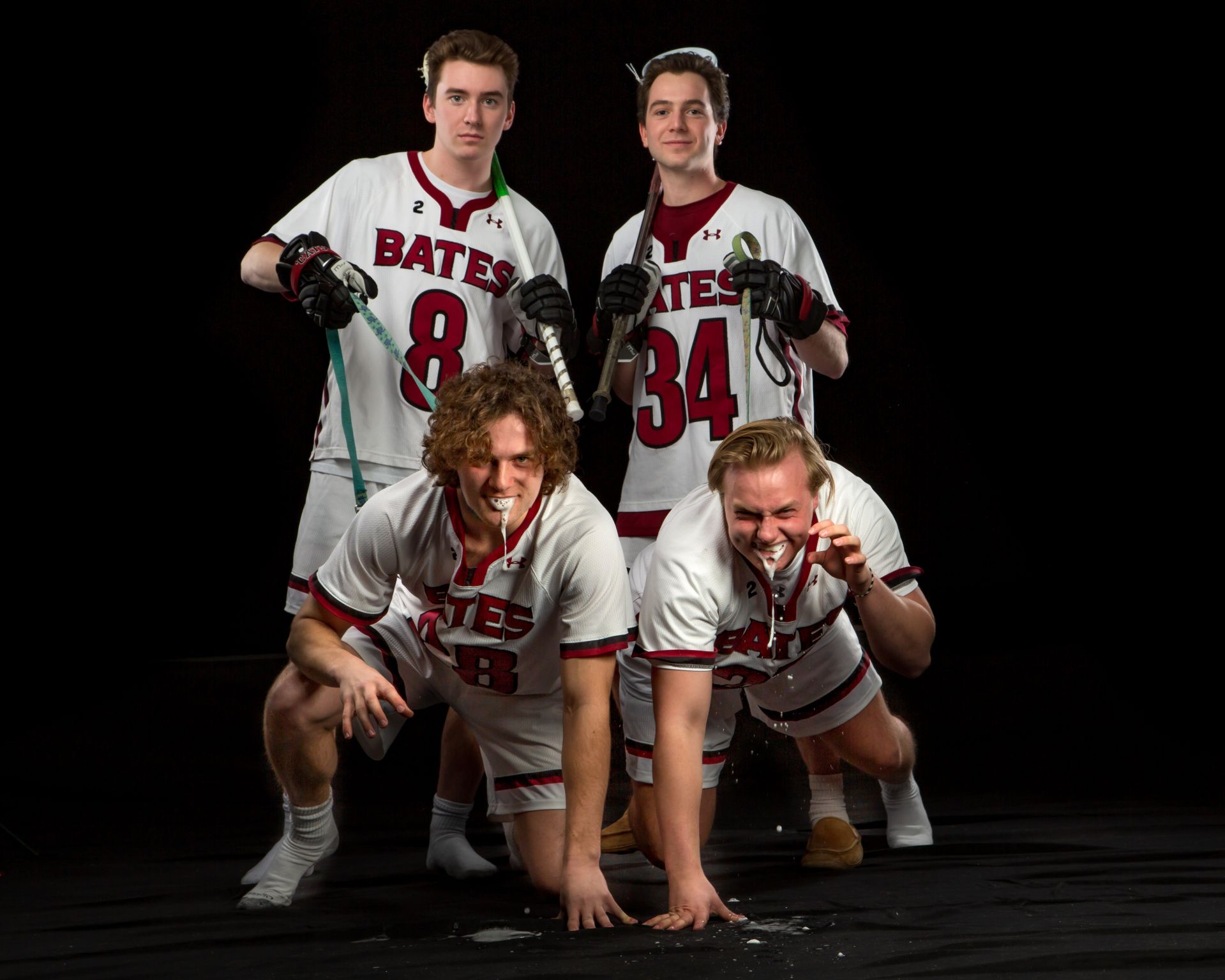 The concept is that Costello and Walsh are restraining two large, leashed, and crazy-hungry dogs — Williams and Ackley — “back from a juicy steak 10 feet away,” explains Costello. The steak, of course, is the ball. And Williams’ and Ackley’s frothing is courtesy of a mouthful of Alka-Seltzer tablets.

As faceoff experts, “we have to want the ball more than our opponent, and be willing to do whatever it takes to get it,” says Costello. “As they say, “Hungry dogs run faster,'” explains Walsh.

Friendship and excitement were the theme when these three first-year track members posed together.

“The three of us had the idea to take this photo to highlight both the excitement of taking sportraits — it was the first time in our uniforms — and being able to take creative pictures with people we’d grown close to,” says Megan Lacey ’23 (right) of Braxton, Miss. 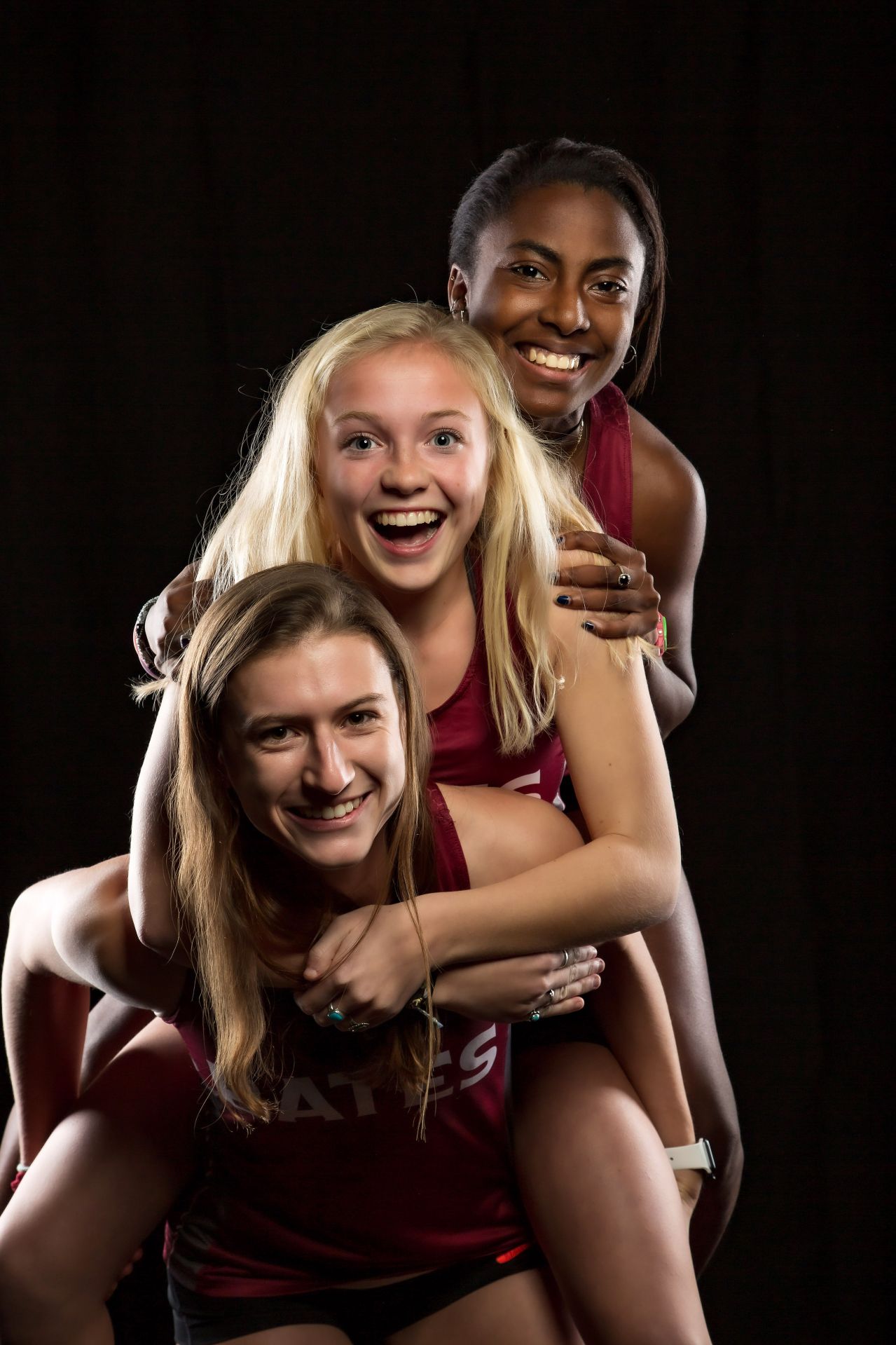 In her first year at Bates, Lambert saw a senior use his shoe like a telephone (some readers will get the Maxwell Smart reference) for a sportrait.

“I thought that it was really funny, so when Henry showed up to our session, I knew I wanted to take a goofy picture with him, and this idea popped into mind.

“It was super silly and really fun — then Henry stole the shoe I gave him and I had to chase him around Alumni Gym in my socks to get it back.” 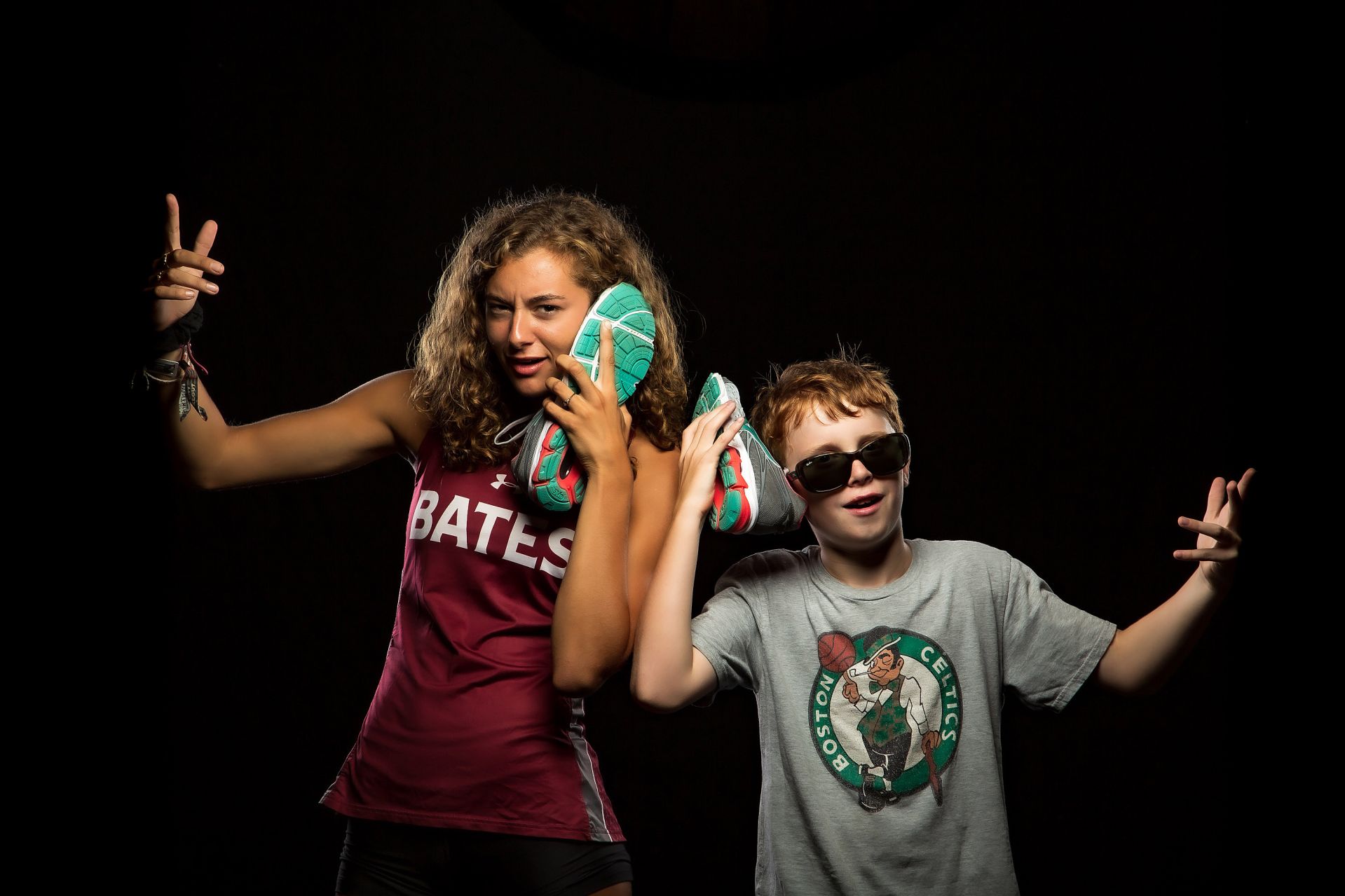 Elijah Coyne ’22 of Newtown, Pa., uses the tools of his track trade, relay batons, to go for a Hugh Jackman / Wolverine look. 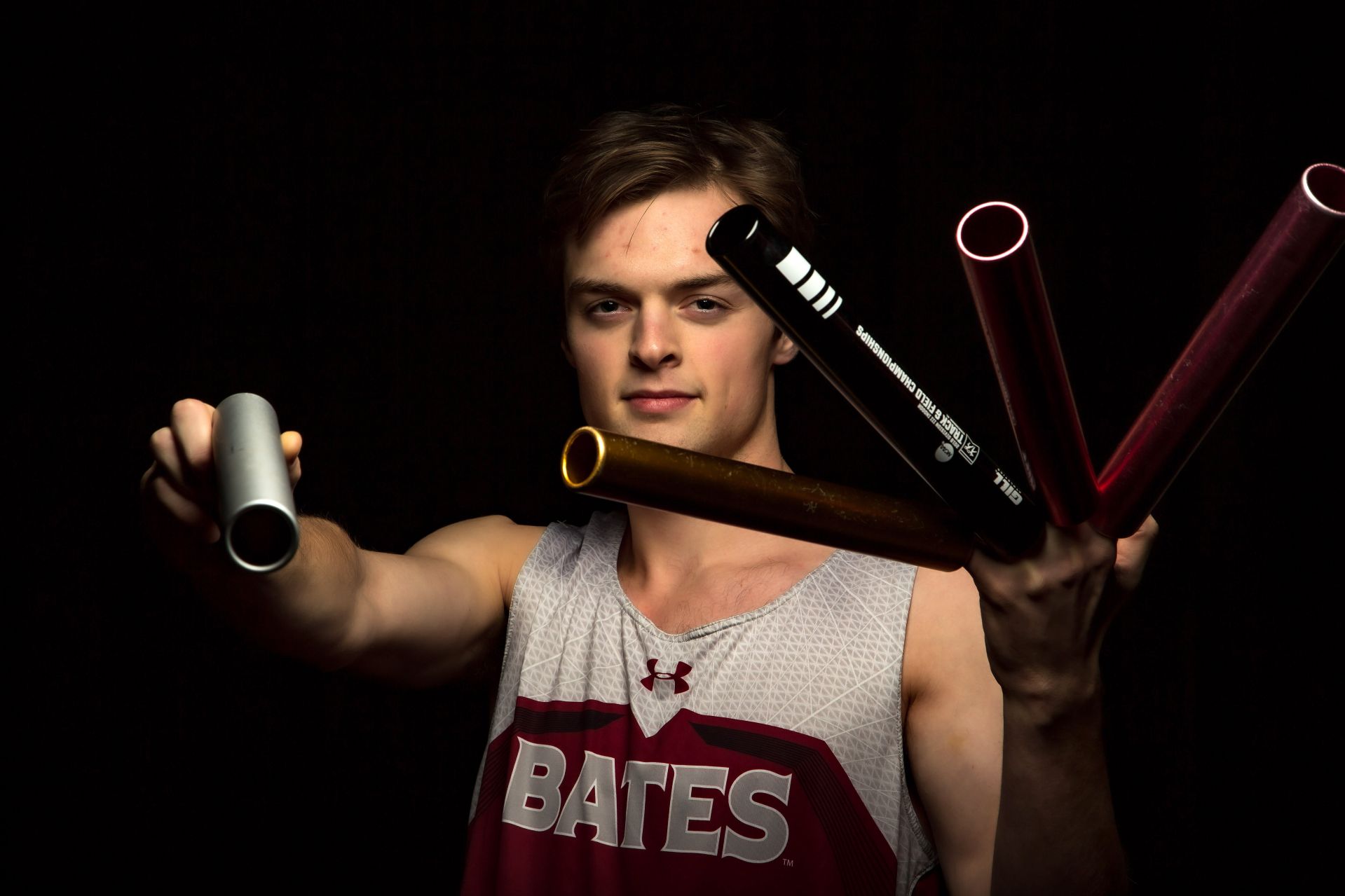 The photo shows Hernandez right before her first tennis lesson, when she was about 4 years old. “My grandma made the skirt I am wearing in the picture,” she explains. “That’s indicative of how involved my family would later become with the sport.”

Playing tennis has taught Hernandez that “consistency, commitment, and purpose are the building blocks to a successful path” forward in any endeavor. Her Bates teammates, she says, “have shown me what unwavering and loyal friendship is.” 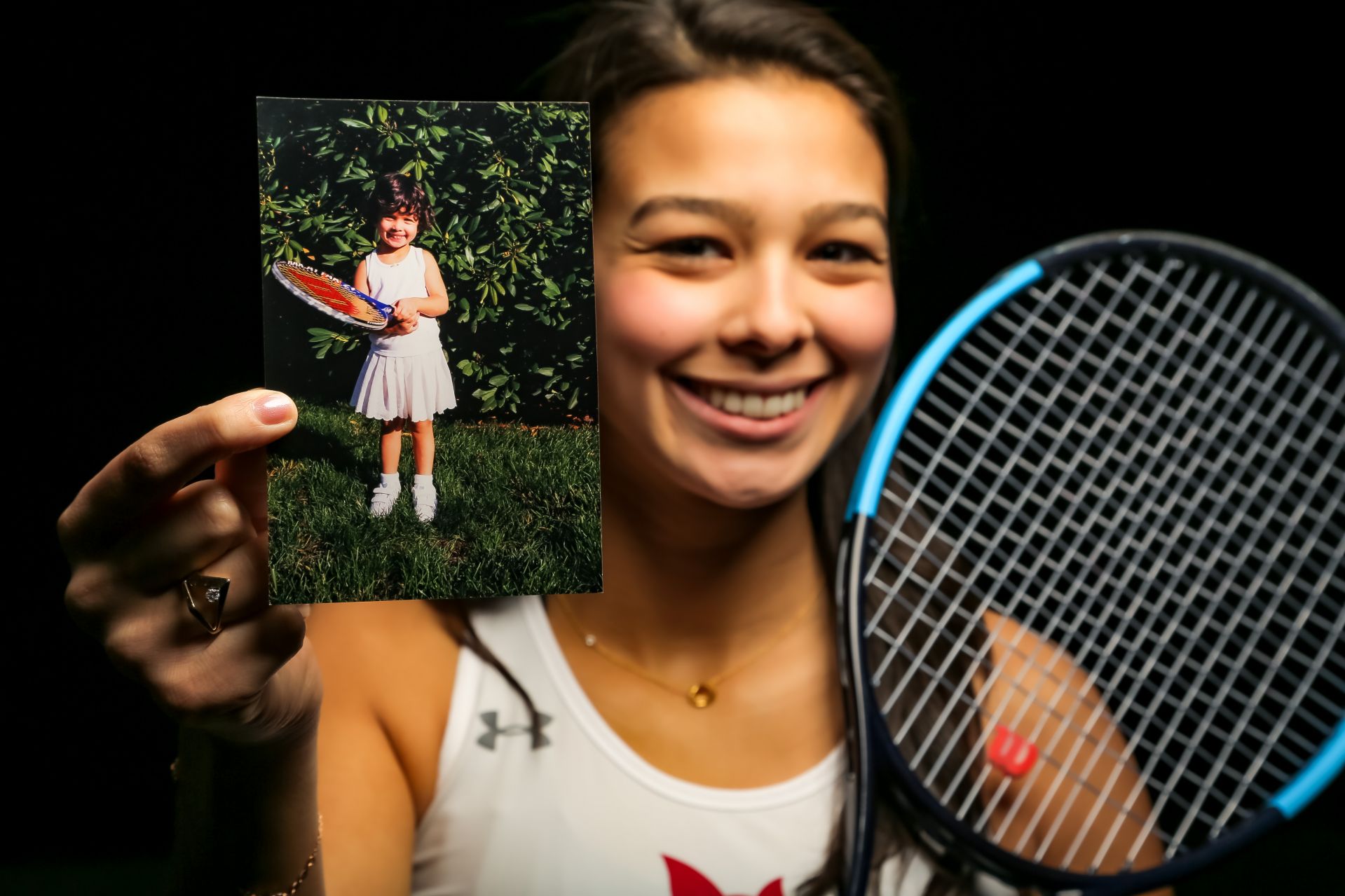 Love of the Game

“He’s the reason why I love soccer. For him, happiness was much more important than just scoring goals and winning a game. Watching him over the years inspired me to make loving the game itself my primary focus. That is why I always try to model my game after him.” 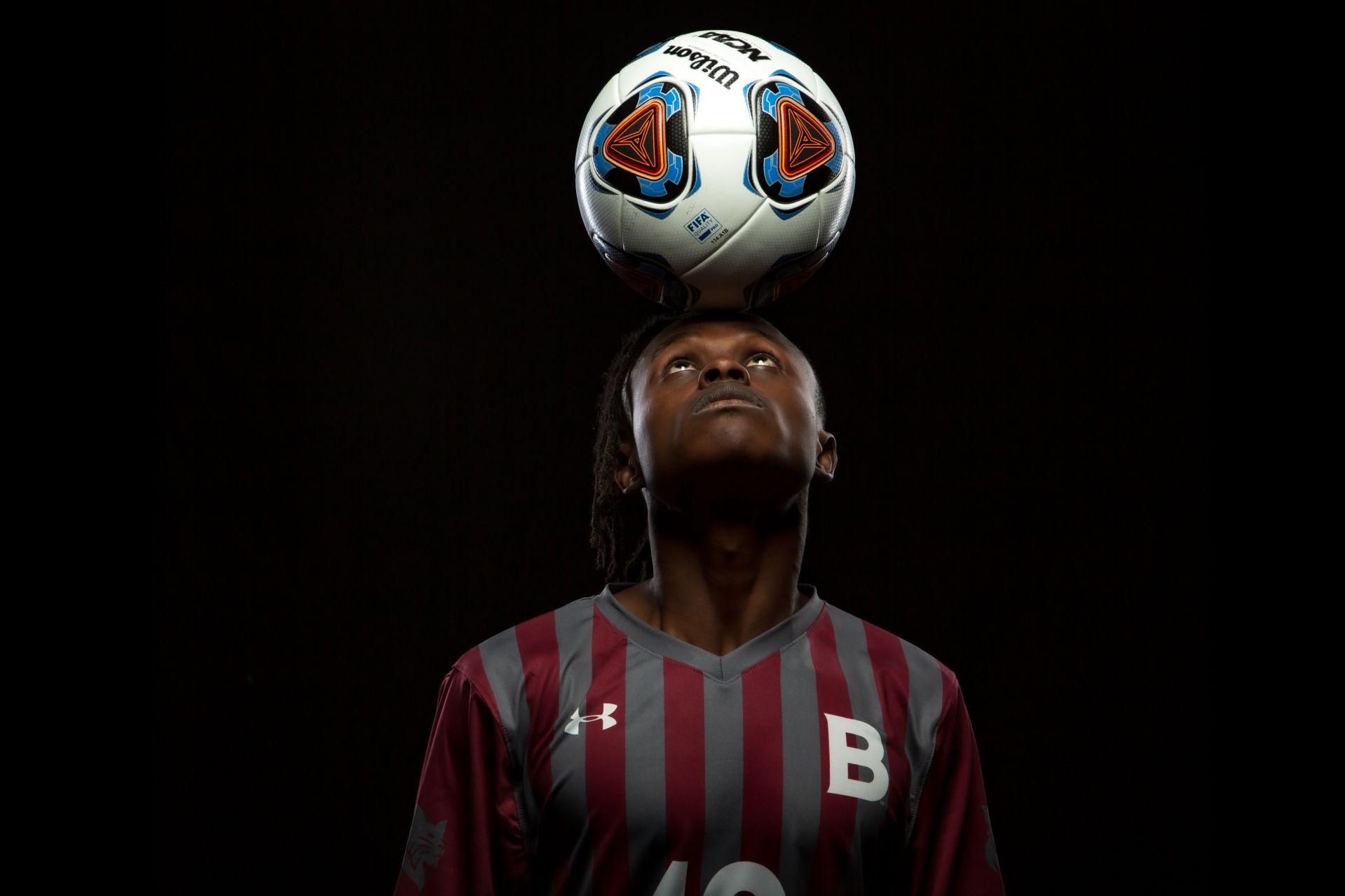 “The pose in the photo is a pike position used in diving. It’s my favorite pose,” says Julia Bisson ’23, a diver from North Yarmouth, Maine.

“As a diver, you have to be flexible so you can spin faster and do more flips. I chose this pose because it represents the flexibility and strength that is required for diving.” 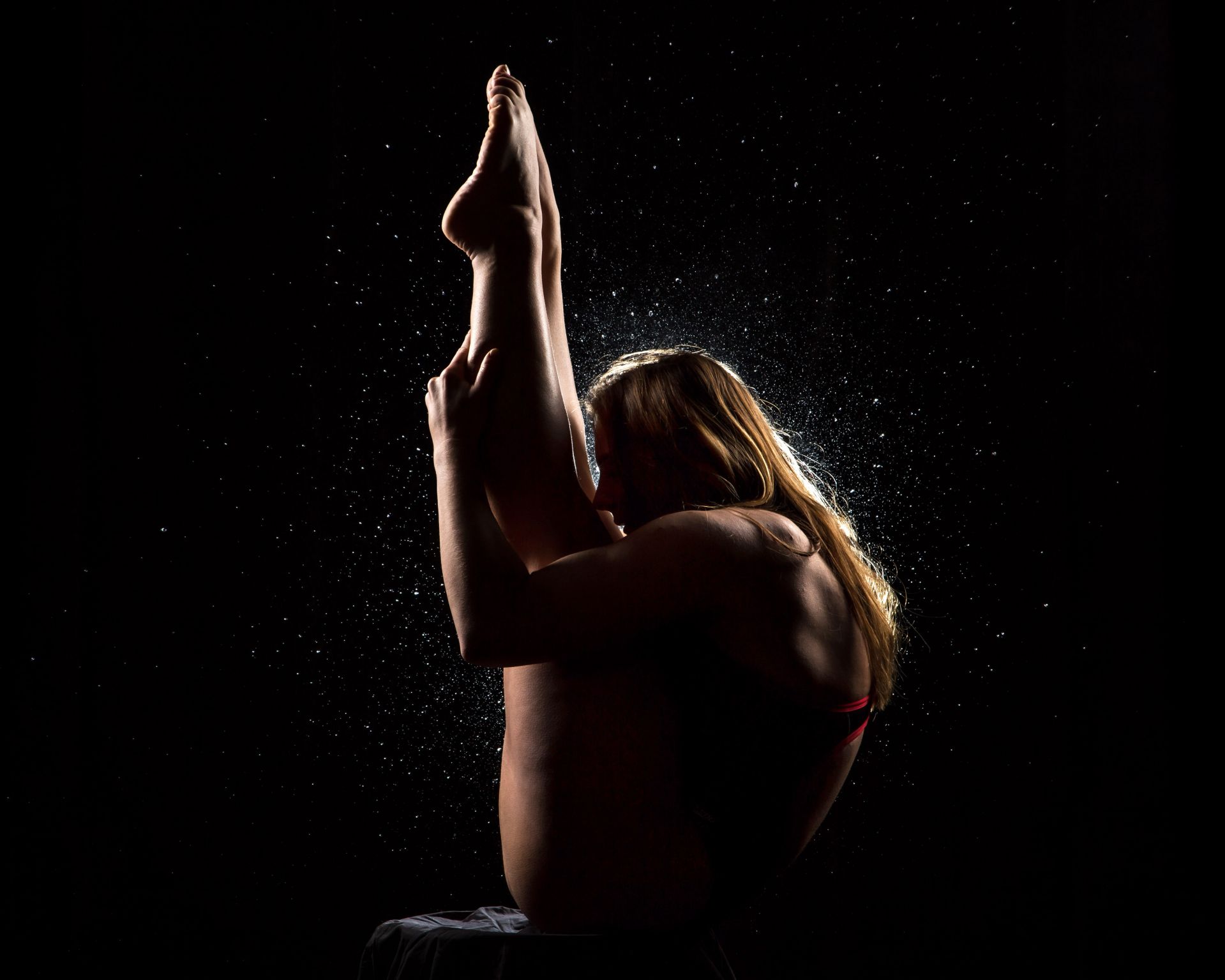 This is a Star Wars–inspired sportrait, says Carter Ros ’21, a history major from Hailey, Idaho. “I wanted it to look like I was using the Force to levitate my skis and poles.”

Star Wars and Nordic skiing? Stick with us.

In this case, the help comes from four of Ros’ teammates, just outside the frame holding all the equipment, just so, for the photo. 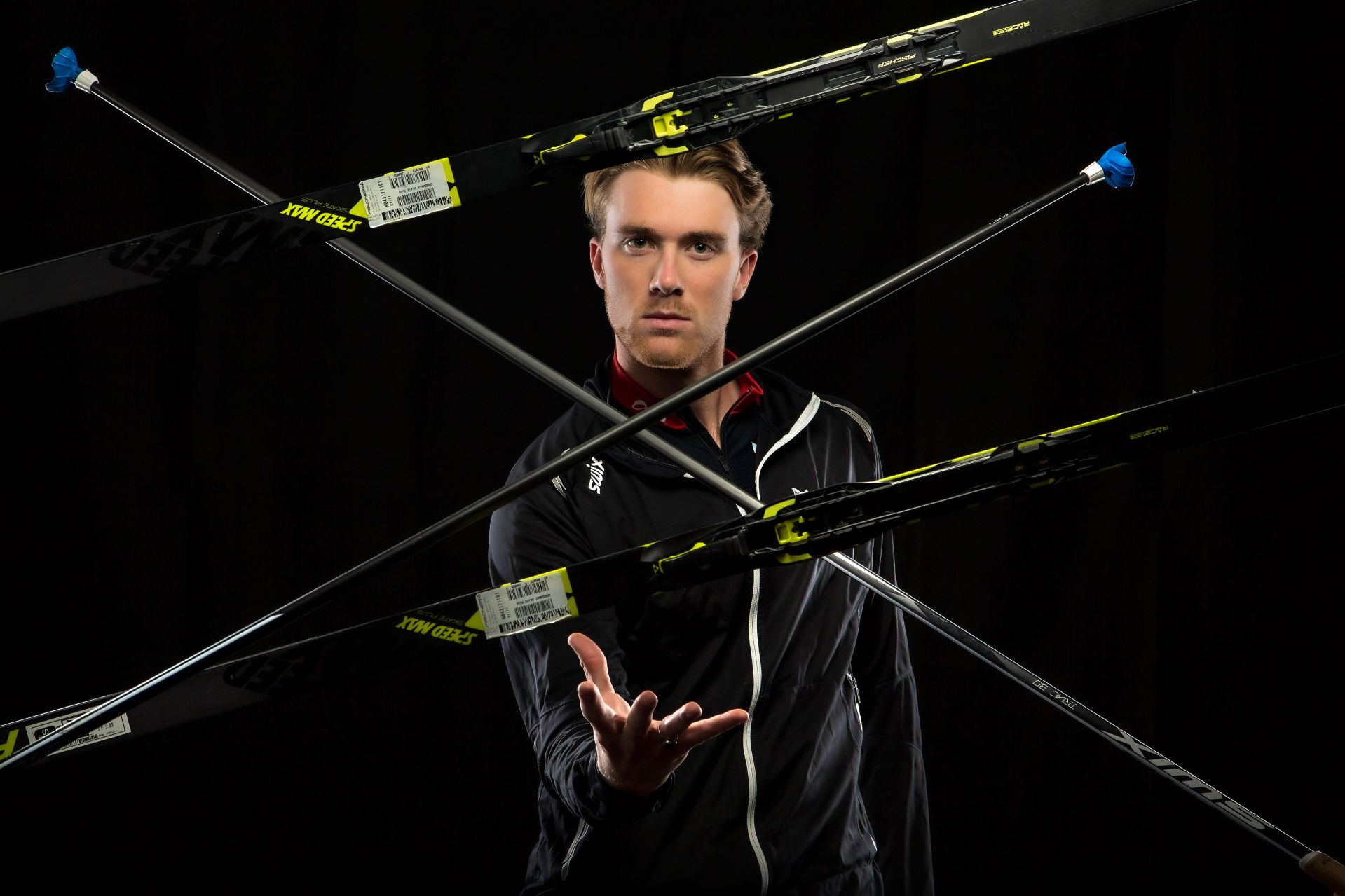 Volleyball player Gabi Eustache ’20, a neuroscience major from New York City, is a defensive specialist known as a libero. Her sportrait shows one of her favorite plays (and one of the sport’s most exciting), the pancake, which requires quickness, intensity, and eyes-on-ball focus.

It’s fun, she says, because “I get to sprawl out on the ground and just barely get the ball up with the top of my hand.”

Volleyball has been incredibly rewarding, she says. “I would not be the woman I am today without my teammates or my coaches.” 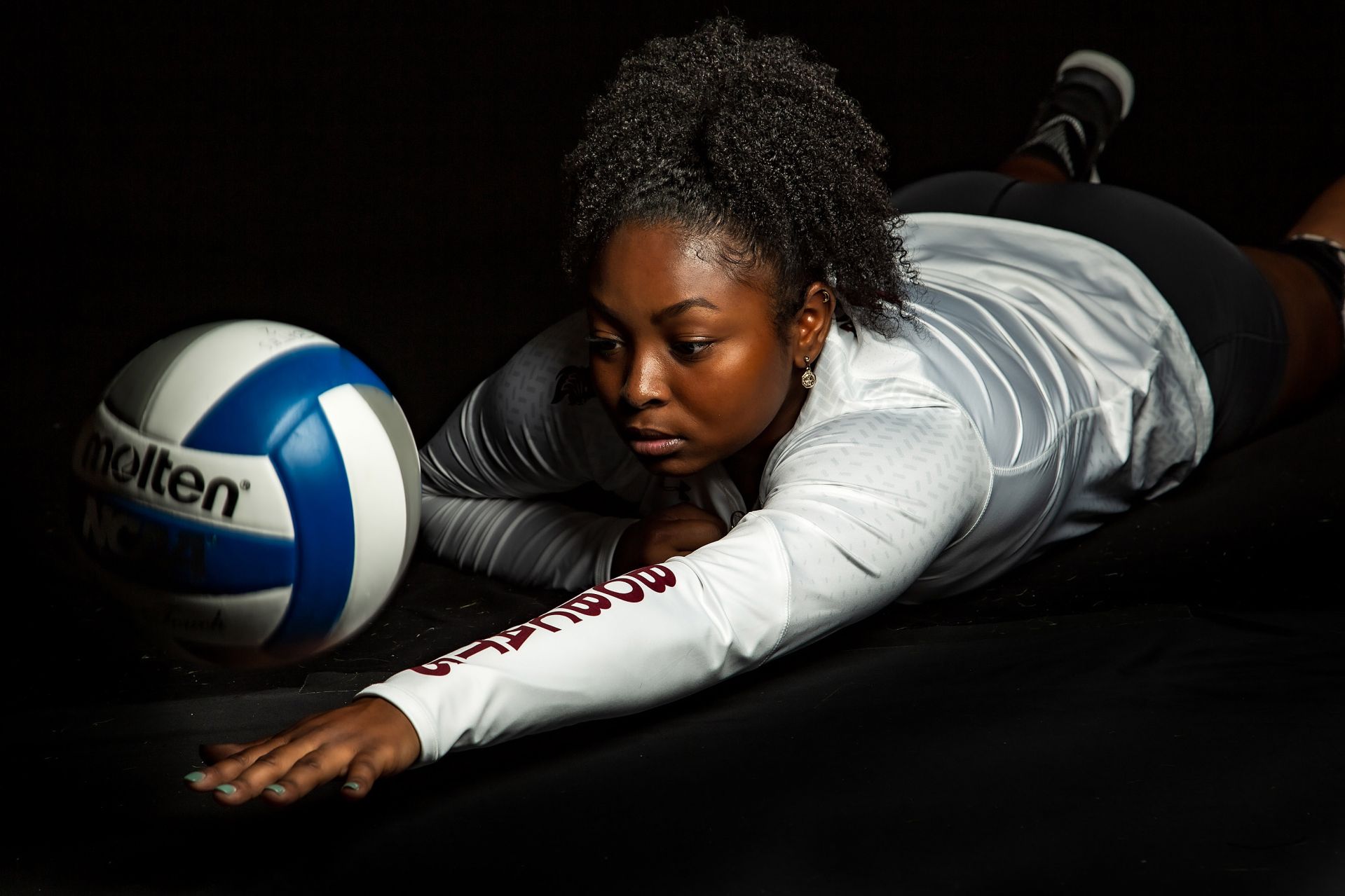 In this group photo, some of the first-year members of the women’s lacrosse team show their solidarity while offering a nod to another talented group of Bobcats, the national champion women’s rowing team. Acting as coxswain, at right, is Cammie Lavoie ’23 of Epping, N.H.

“Looking back, we realized our facial expressions didn’t quite match with what we were going for, but that made it funnier in our opinion,” says Shelby Howard (far left) of Ashland, Mass. 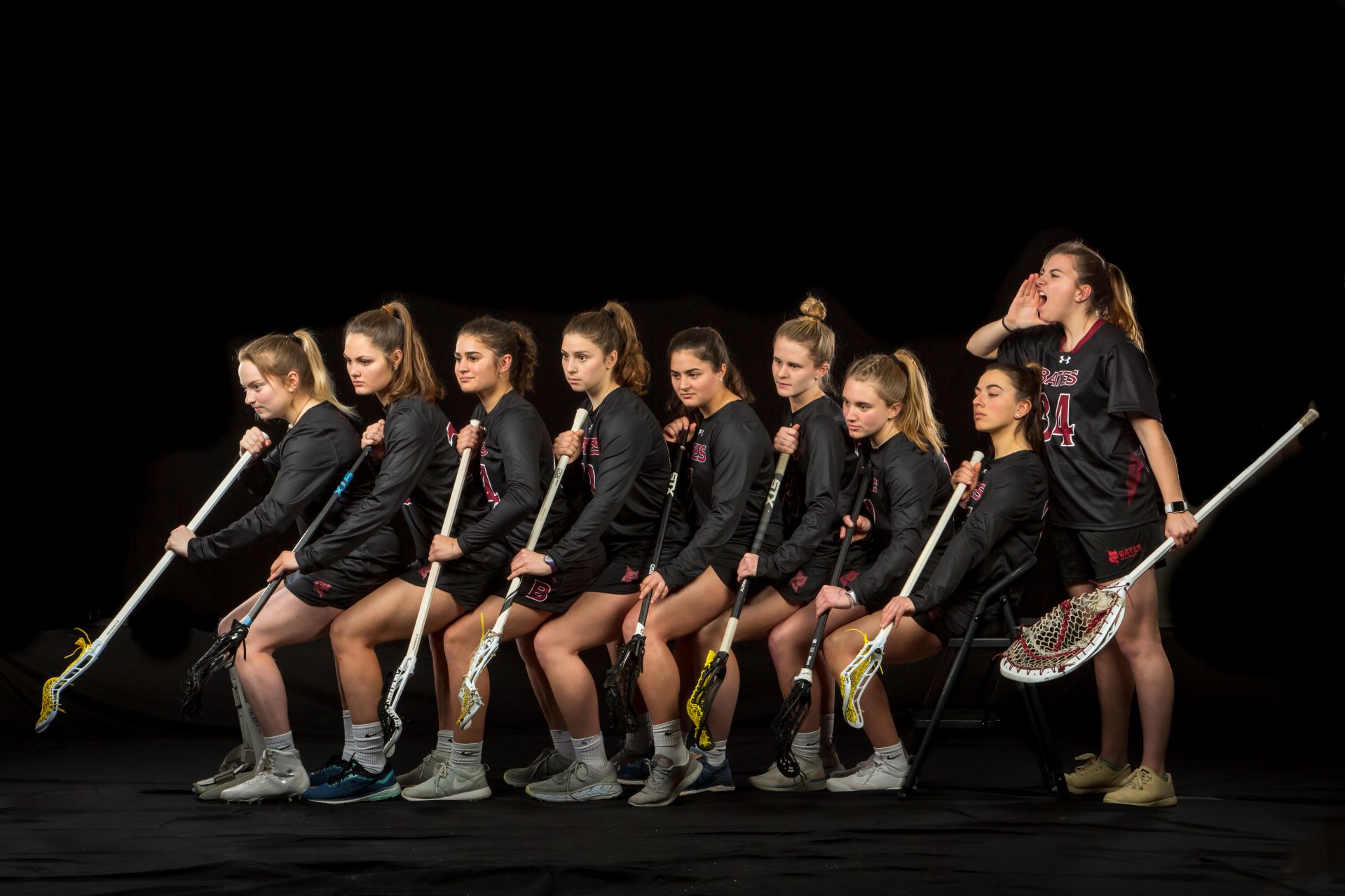 “Running is often hard and painful, but I wanted my sportrait to show the joyful side of it,” says Vanessa Paolella ’21, a geology major from Dingmans Ferry, Pa.

“Running makes me feel like I can do anything,” she says. “While my form in this photo is more dynamic than usual, I think it captures the feeling really well.” 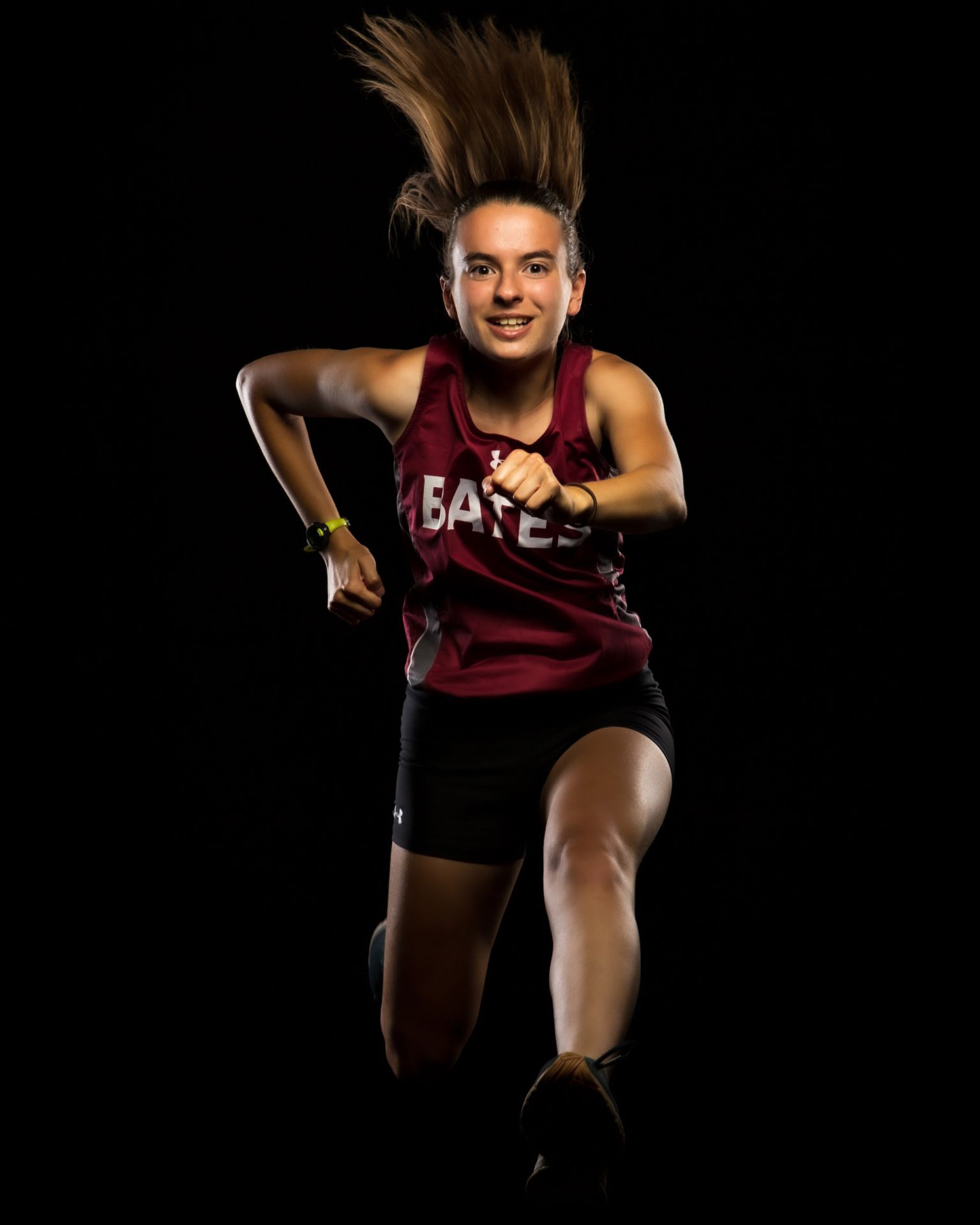