We were loafing on Bardwell Street on Monday when we spied a flatbed truck bearing the Maine Masonry logo.

A forklift operator was nearly done unloading the truck, which had brought to the Bonney Science Center site the first installment of the self-elevating Hydro Mobile staging that masons will stand on as they cover the science center’s walls in brick — work likely to be underway by next week.

As applicators for Standard Waterproofing of Winslow, Maine, go around the building laying “blueskin” air and vapor barrier onto the bare concrete walls, the Maine Masonry bricklayers will follow. That means that the bricks will first appear on the south wall, facing downtown Lewiston. 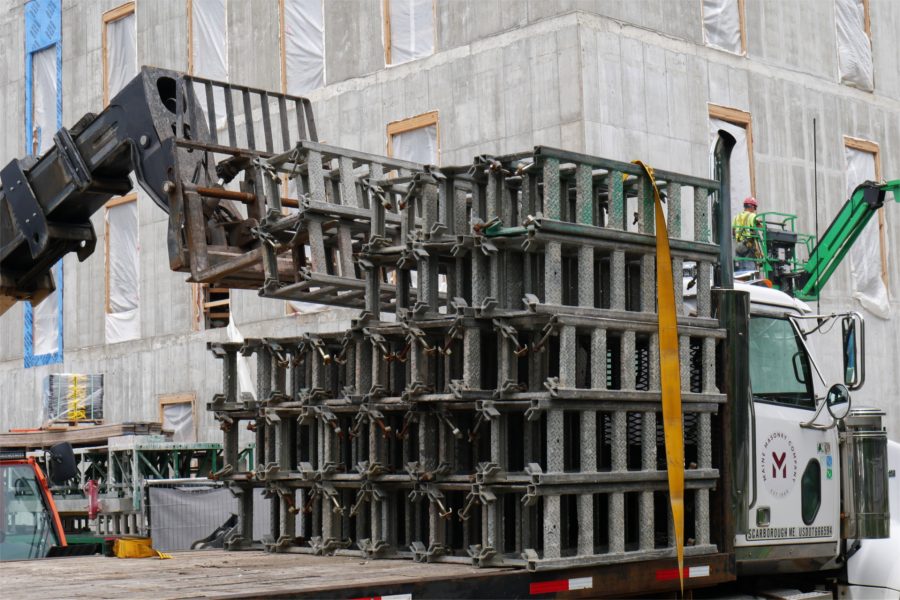 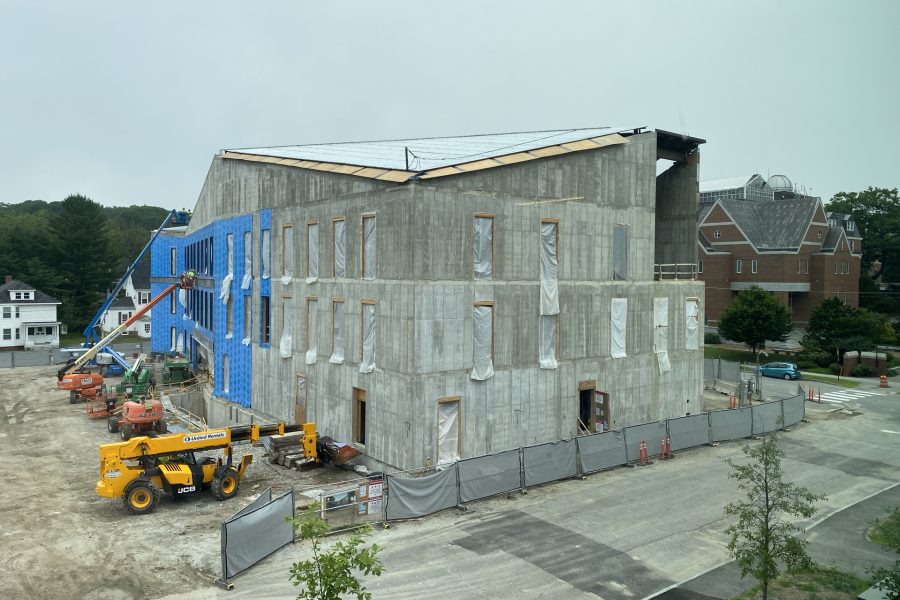 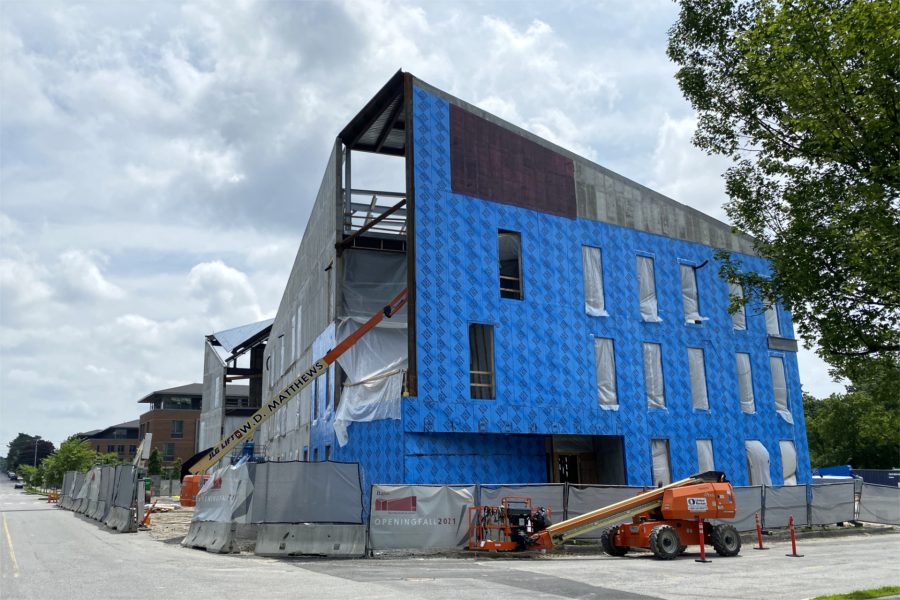 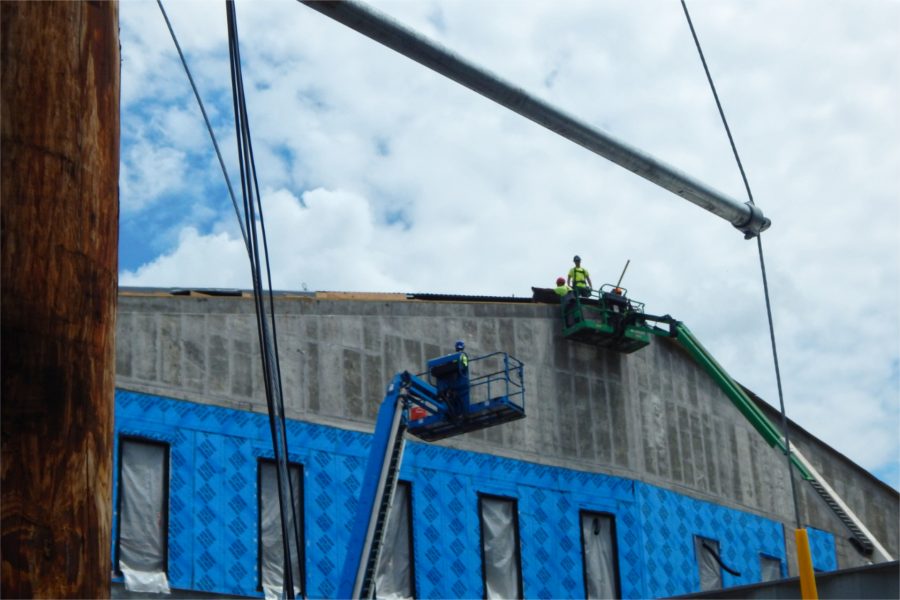 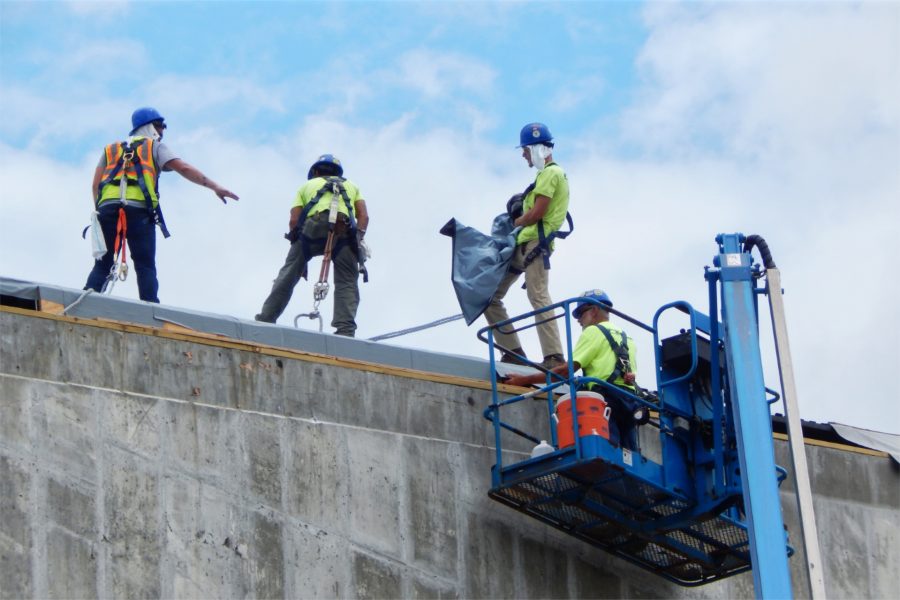 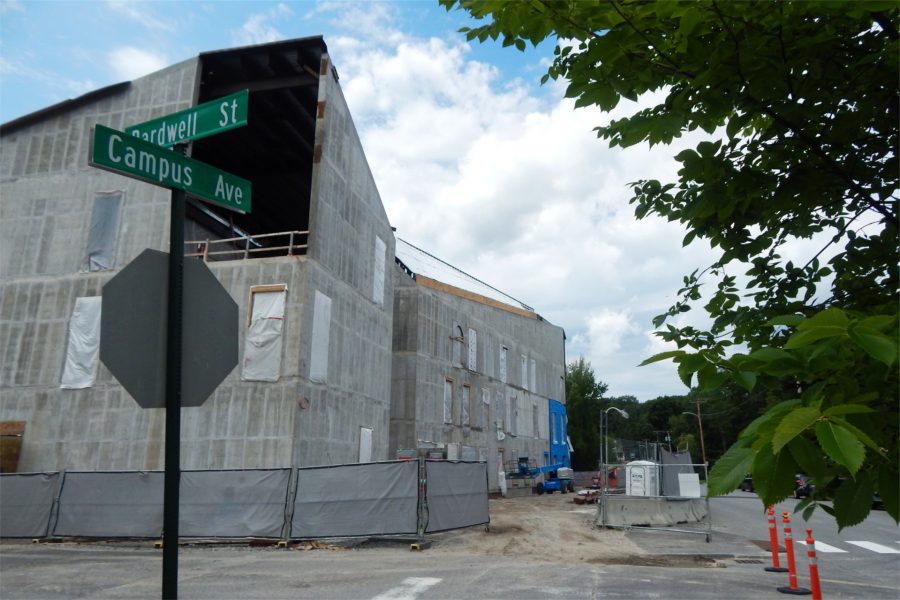 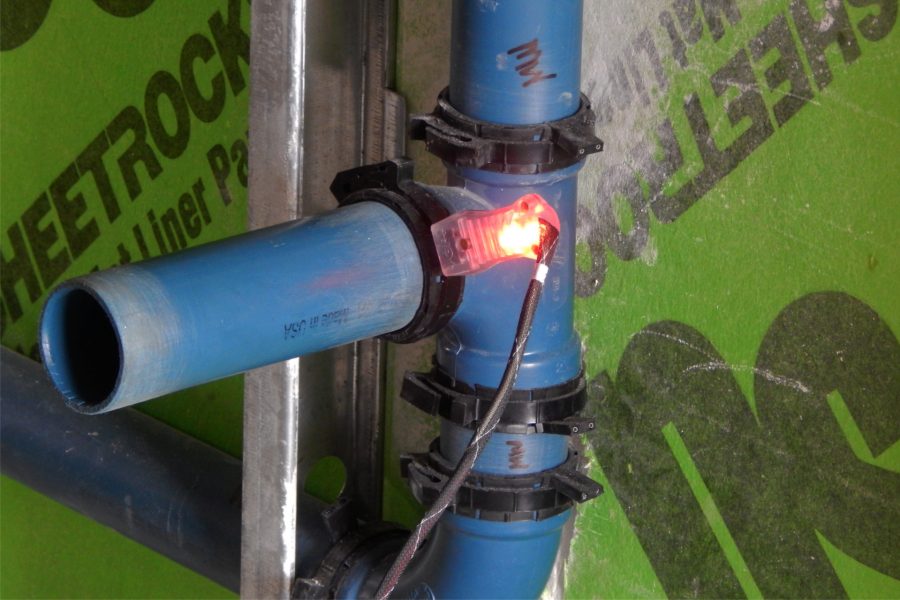 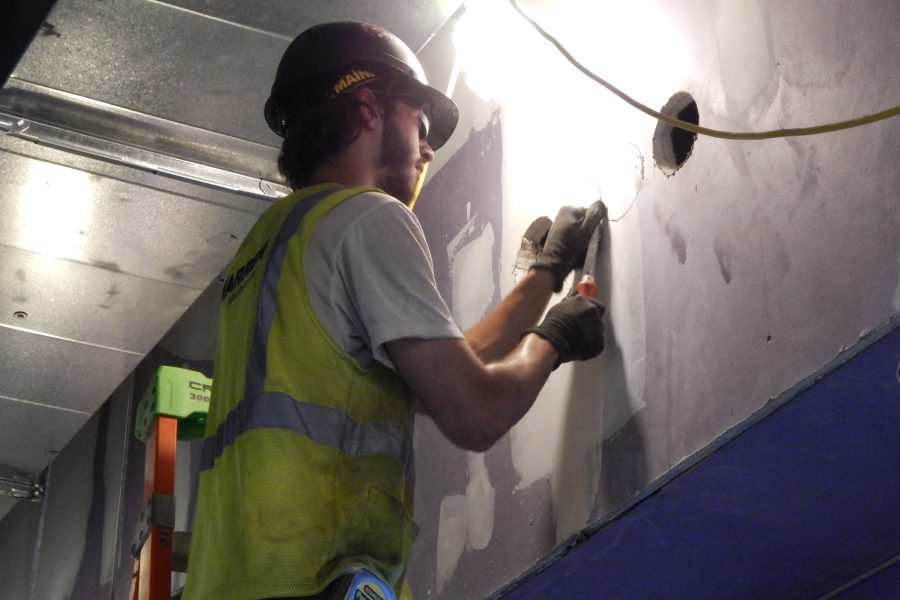 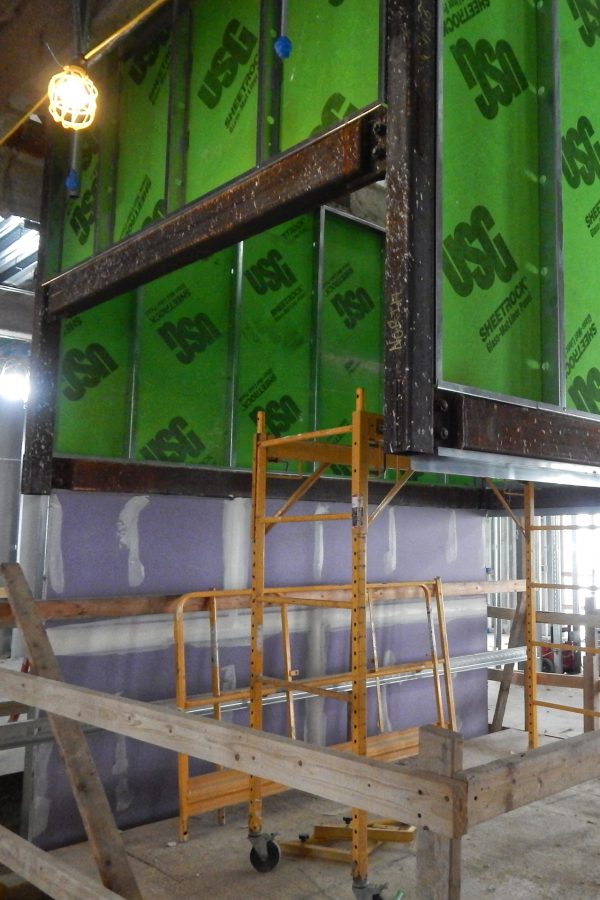 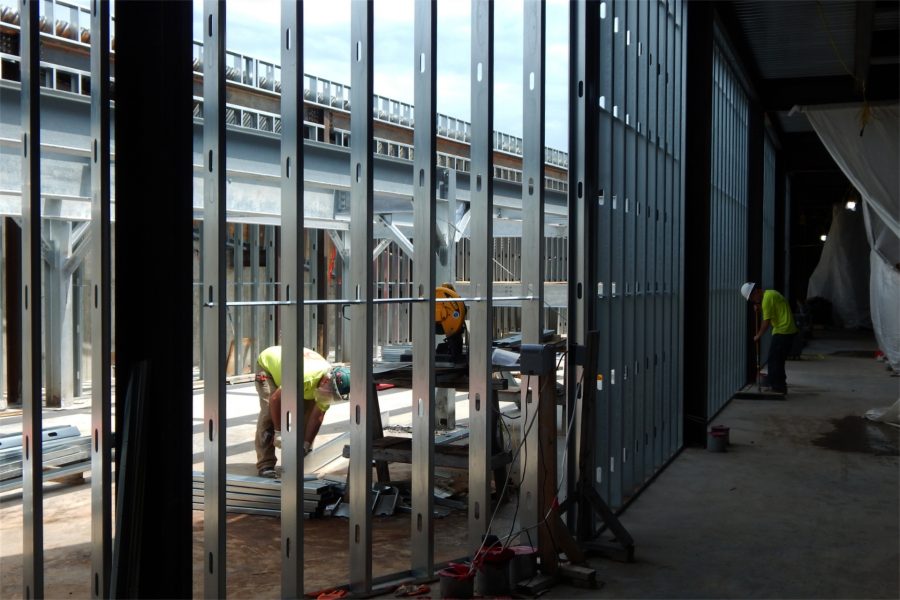 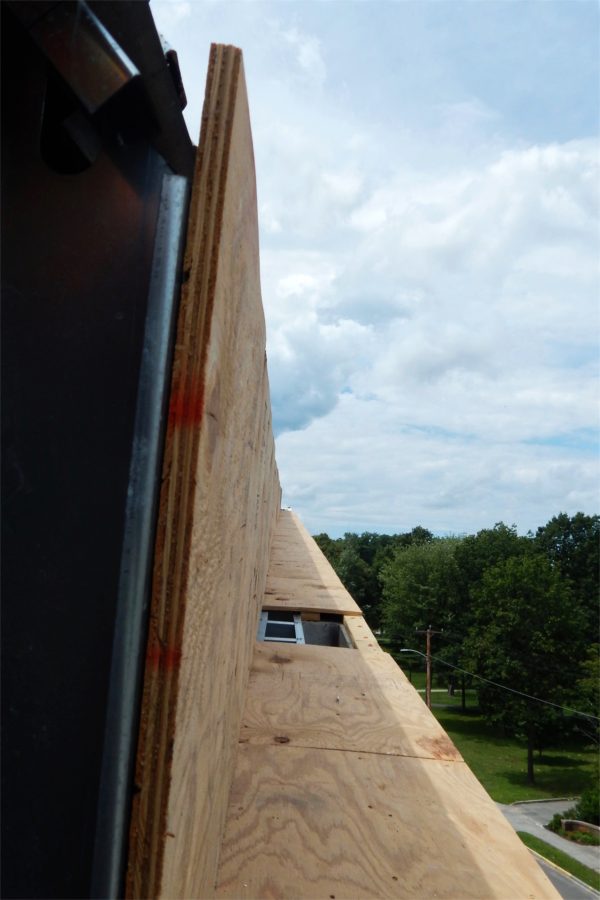 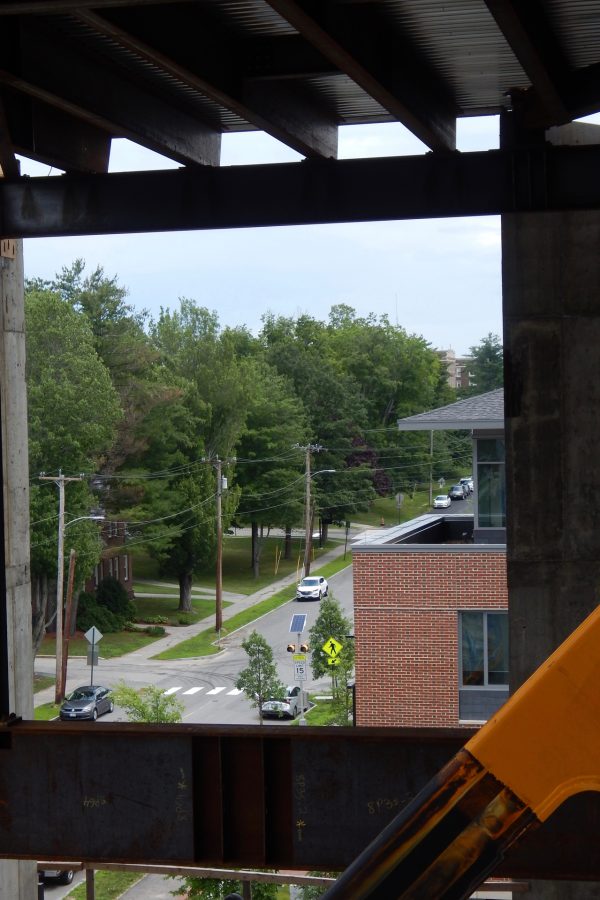 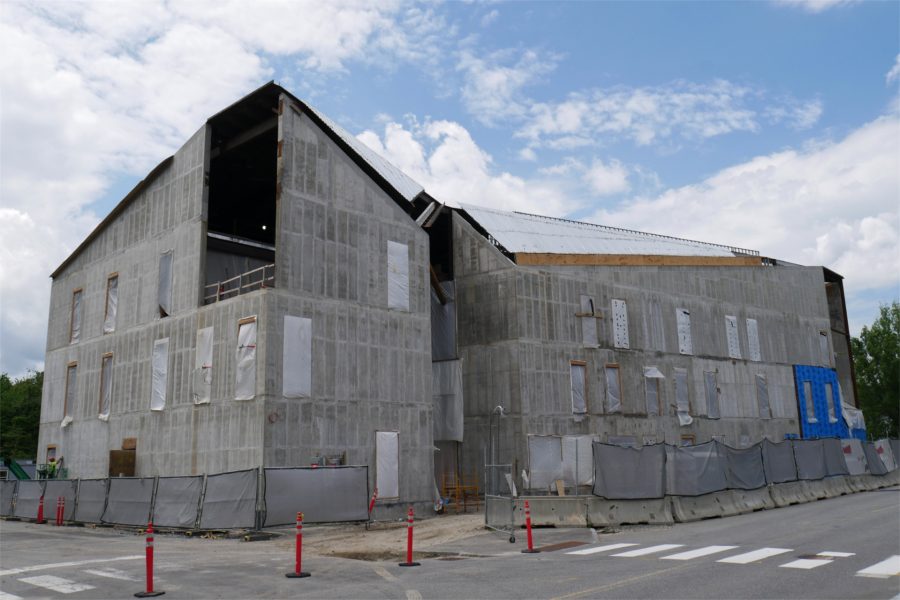 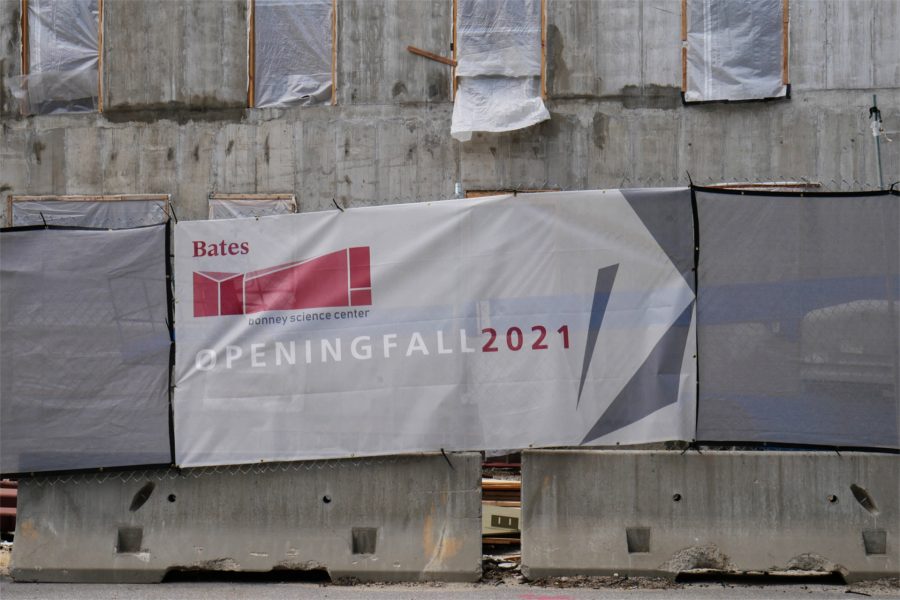 This is exciting in part because of the visual effect that a spreading veneer of brick creates. If you hang around the Bonney site as much as Campus Construction Update does (it keeps us out of trouble), you’ll see that the bricks will bring the building a long way toward its final appearance. As an interesting corollary, the building will appear to shrink a bit even as the bricks actually, if only slightly, increase its size. This is because bricks, being darker than concrete, are visually more recessive.

Another notable process happening now relates to a standing goal in the construction of buildings, which is to make them weatherproof as soon as possible. (In fact, studies have shown that the desire to get in out of the rain was a major driver in the invention of buildings.) To that end, a temporary rainproof membrane is being applied to the shiny steel Bonney roof decking, which itself was completed in late June.

Likewise weather-related and occurring high in the air is the start of gutter construction. Normally we strive to keep our mind out of the gutter, but as an object of contemplation the Bonney center’s stormwater gutters beat the Frederick’s of Hollywood catalog all hollow. They constitute, in fact, a building system surprising in its intricacy and inventiveness.

When Bonney construction is finished, about a year hence, the gutters won’t be apparent. That is, they will not project out from the roof’s edge as one would expect. Instead, the gutter will be a channel set back slightly from the roof edge, so as to gather water flowing down from the roof peaks as well as from the narrow rim that’s outboard of the gutter. The edge of that rim will sit flush with the surface of the exterior wall.

Drainpipes will conduct the runoff to the building’s stormwater treatment system. Electric heat mats in the gutter troughs will melt ice and snow. Layers of insulation, copper, and water barrier will accomplish other feats that we’re still trying to comprehend.

In short, constructing the gutters will demand a complex choreography of multiple visits from several building trades — carpenters, plumbers, insulation installers, metalworkers, etc. — a choreography taking place, don’t forget, in cherry pickers four stories up. (Suddenly we regret all the little trees growing from our own rain gutters.)

Chris Streifel, Bates project manager for the Bonney Science Center, points out that in its sophistication, the gutter is consistent with the greater roof (and building) design. Aside from one flat and level section at the very top of the building that will be covered with a rubbery membrane, the building’s lid comprises a mix of pitches and orientations.

“The biggest challenge on the building’s exterior for the construction team, I think, is working those gutter details,” Streifel says. “But then there’s a lot to the overall roof. There’s nothing particularly unique about the materials — it’s just the way that the forms and details come together with almost zero repetition.”

Providing visual unity is the roof covering, a copper product that will arrive “pre-weathered” to an attractive dark color and will be laid in a standing-seam format. Made by Revere Copper Products and called “Continental Bronze,” this material is already known to Bates roofing aficionados from the renovation of Hedge and Roger Williams halls a decade ago.

Top to bottom: Inside the Bonney center, there’s a certain urgency to the progress in the uppermost story — the so-called penthouse — and the basement, which both house various major electrical and mechanical components.

“There are matched-pair systems at the bottom and in the top that all have to be completed to make the whole building work,” HVAC being a prominent example, Streifel says. “A critical aspect of work will be getting those systems in place, and then in the spaces between, everything else can go in.”

With the roof decked over, “the penthouse now is available as a work space, so they’ve directed a lot of the wall framing crew up there. The priority now is to close in the walls around the mechanical well” — an area open to the sky where a generator and other gizmos will live — “and a couple of other locations.”

Streifel adds, “A parapet runs along the perimeter of the flat roof and that needs to be built to finish up the membrane and terminate the flat roof. The flat roof will be one of the first actual roofing products that goes on that’ll stay,” in contrast to the temporary membrane being applied to the pitched roof.

The wall framers are also focusing on the window openings to “make sure that all of those areas are framed so that the waterproofing and frame installation can continue.”

In the basement, there are two areas of emphasis, one related to building-wide mechanical-electrical-etc. and the other, not so much. The latter is wall and ceiling construction in the vivarium. The former “is just the steady progression of adding more and more pipe, wire, and controls that service all of the HVAC, electrical, and plumbing equipment” in the jam-packed mechanical area, Streifel explains.

“That’ll be a steady progression from coarse to fine over months until that equipment’s ready to be started up — October, November, or December. It won’t all happen at once, either.”

So what’s shaking in between the top and bottom? Progress is deliberately slow on the third floor, because the building still isn’t completely weathertight and the third floor serves as something of a shield for the floors below. The first floor is ahead of the second floor (not that it’s a race, but would anyone like to get into a pool?), but otherwise the chores there are fundamentally the same: installing walls and utilities.

With the utilities in particular, Streifel explains, from week to week it’s “sometimes hard to see much difference because it kind of all looks the same. But if you pay attention, you can see just how much more there is in the walls and overhead.” He adds, “What the mechanical and electrical people are focused on now is all of that infrastructure behind the walls and above the ceilings.”

In other Bonney news, the building’s dedicated electrical transformer was energized on June 25, a job that entailed darkening Chu Hall for the day. While the switchgear inside Bonney isn’t quite ready to receive juice from the transformer, “that’s a pretty big milestone” nevertheless, Streifel says. It means that major electrical work can take place without affecting other campus operations.

Finally, he reports that the first shipment of steel has arrived for what the construction team calls the “monumental stair,” a prominent architectural feature that will be showcased behind a three-story glass curtain wall. But more about that later.