Setbacks and successes: How students navigated academic surprises in the fall 2020 semester

As Bates students navigated a fall semester within COVID-19 protocols, another saying came to the fore: “It’s OK not to be OK,” said Kenza Nadifi ’21 of Bethesda, Md.

Besides being a “bizarre” semester, said Nadifi, it was, importantly, a time when “being extra careful with people is more vital than ever.”

The protocols stripped away many favorite pursuits while creating some high hurdles. There was no sit-down dining in Commons, no competitive sports, few in-person activities for clubs and organizations, and required physical distancing and masking nearly all the time.

We asked seven students how it went. (Students have now departed campus before Thanksgiving and will finish their semester remotely.)

What we heard is that for every challenge or setback, they often found something that worked, something that felt “normal,” and someone who gave them a little help. 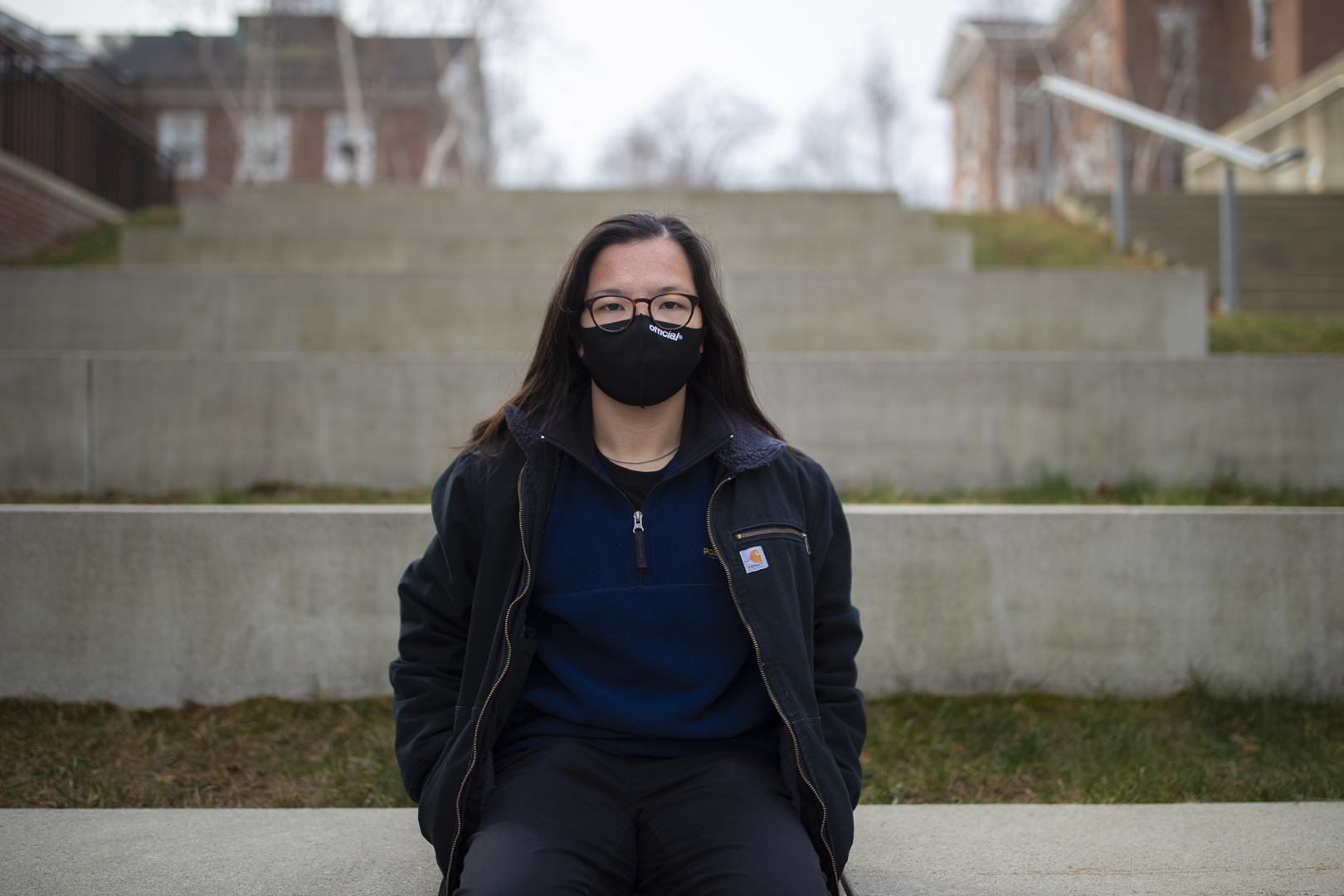 Major: Interdisciplinary Studies with a focus in digital and computational and gender and sexuality studies

Mei says: As luck would have it, my two courses during Module A were both in digital and computational studies. During a normal semester, I would have also taken some humanities classes for balance, but I couldn’t because of the module system.

It was nice in some ways: My DCS classes overlapped a lot in material, and I was able to do an intense, deep dive into critical digital theories. One of the downsides is that I couldn’t practice my humanities-oriented academic skills for a long time. During Module B, I took a gender and sexuality studies course. When I had to write my first paper, I realized that I hadn’t had to use academic citations in six months.

So far, I’ve had Professor Anelise Hanson Shrout for four courses in my three semesters at Bates. That’s been a bonus, to be able to explore an academic discipline with such continuity and stability and have her see me grow as a student.

In every class I’ve had with her, I’ve been challenged to learn in a different way. But I’ve also been able to work with the same sort of familiarity: I know how the syllabus is going to look, I know her different attendance policies, so it’s nice to have that mix of things in class. 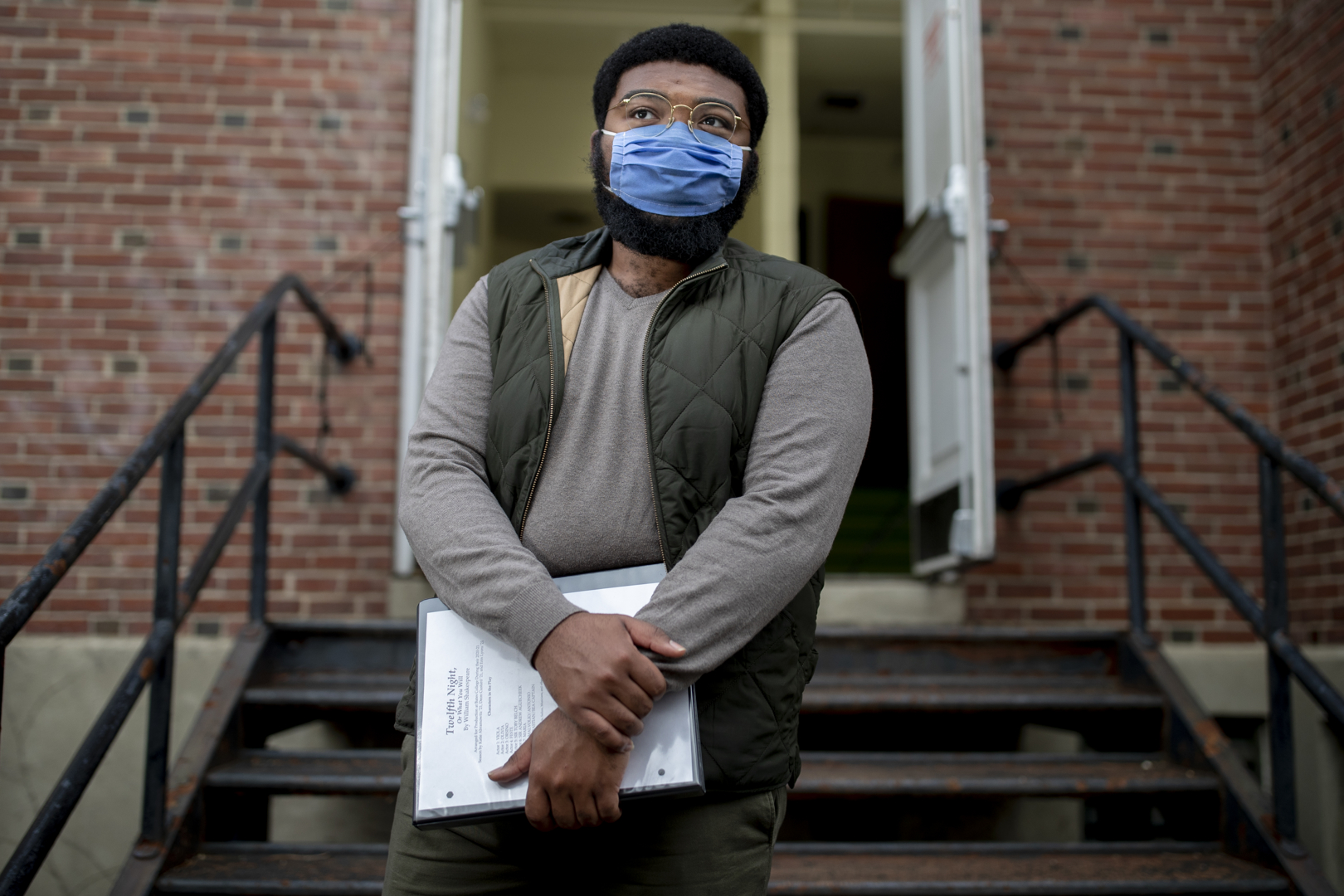 Challenge: A canceled fellowship and travel grant, then hope

Deon says: Last summer, I was going to do research for my senior thesis in London and Cambridge thanks to a Phillips Fellowship. That was canceled.

I was approved for a small grant to take a trip to the Folger Shakespeare Library in Washington, D.C., this fall. That was canceled.

What wasn’t cancelled is my production of Shakespeare’s “Twelfth Night” during the winter semester. Mounting a show during COVID-19 protocols, including physical distancing, creates logistical and technical setbacks, but I’m surrounded by an incredibly flexible production team that is taking even the most abstract ideas and turning them into concrete pieces of art to share with the entire community.

We’re setting this show around New Year’s Eve 1969. When a play is set in a time and place different from what we might expect — 1969 instead of 1602 — the text and the context need to reveal something deeper about each other in order to be an effective piece of storytelling. Otherwise, it’s just camp.

As someone studying the early modern period and the 1960s and ’70s from the historical vantage point that is 2020, it’s clear how history continues to repeat itself over and over. Our stories of revolutionary love and social resistance will always be worth telling. 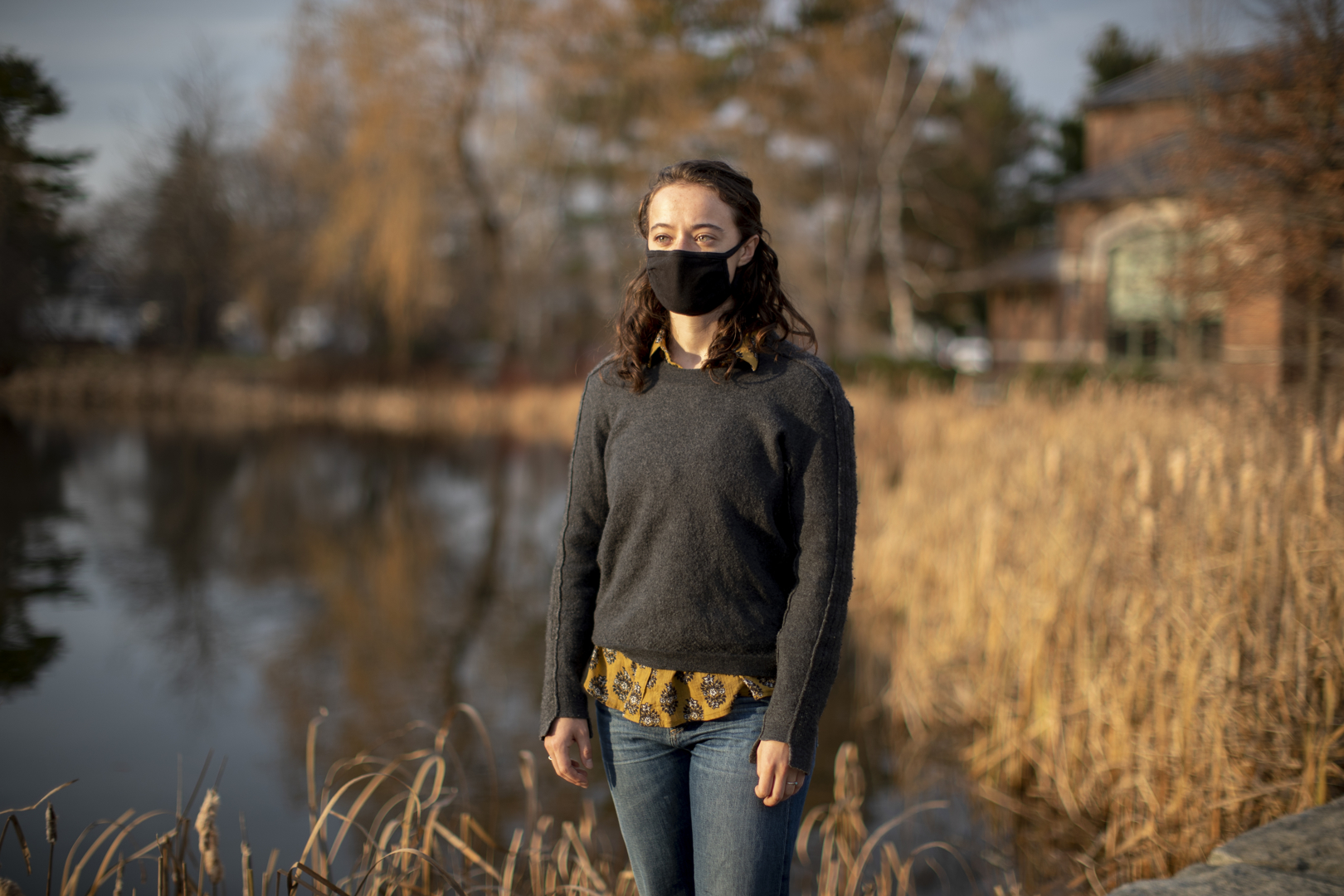 Esme says: I am graduating this month, so I began this semester so anxious about what my job opportunities might be. What I’ve learned is that Bates alumni are very generous and sympathetic to how COVID has affected our college experience. They are more than willing to speak to us about their career paths or offer any assistance that they can in helping current seniors get jobs after graduation.

I am particularly interested in the intersection between physical anatomy and psychological health. In the past week, with support from the Center for Purposeful Work, I’ve spoken to Bates alums who graduated in 1985, in the ’90s, and even just a few years ago. They’ve been able to connect me not only with their labs and psych opportunities but also send me lists of other contacts.

When I realized that Bates alums are willing to talk to me, I realized just how easy it is to connect and network with them and get a better understanding of different opportunities that I might have with my majors that I wouldn’t have otherwise considered. 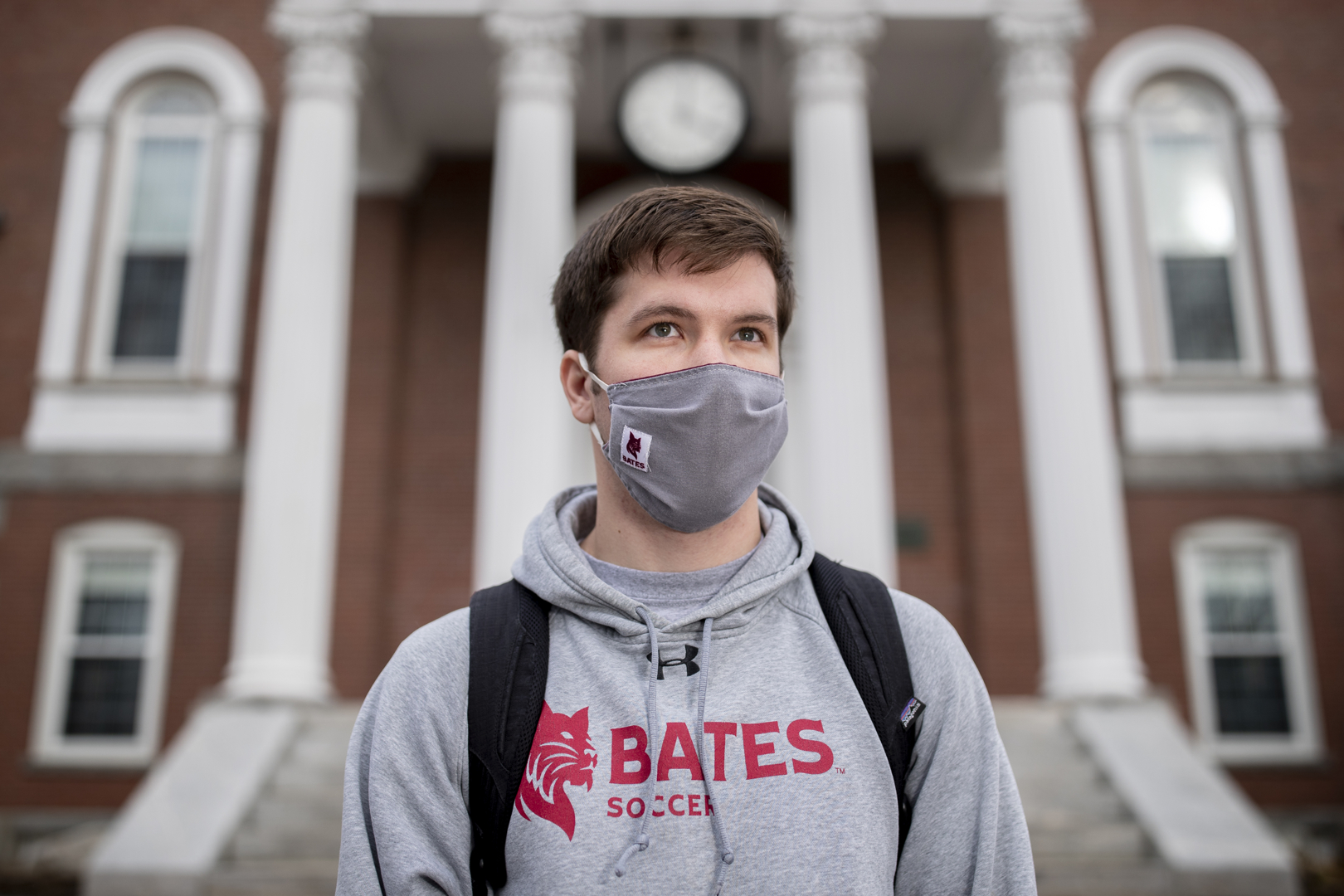 Challenge: Getting timely feedback during the module format

Peder says: A lot of students, including me, struggled to adjust to the module format. Instead of having an entire semester to complete coursework, we had just half that time. Often, a paper or assignment might be due before you got comments on the last one. This was challenging because I typically adjust my work based on a professor’s feedback.

But faculty were very nice about always having office hours and availability to meet over Zoom. They were always available to have one-on-one discussions. For instance, I just had a meeting yesterday with my math professor about one of our quizzes. We were able to talk through a problem: what it means to be an open set or a closed set.

I had a few holes in my knowledge, and that that conversation filled them in a way that I don’t think I would have gotten from just getting the problem marked wrong on a quiz. Though it’s not something I’ve done as much as I should have over the years — talk to your professors during office hours — it’s what I tell the first-years on the soccer team to do now. 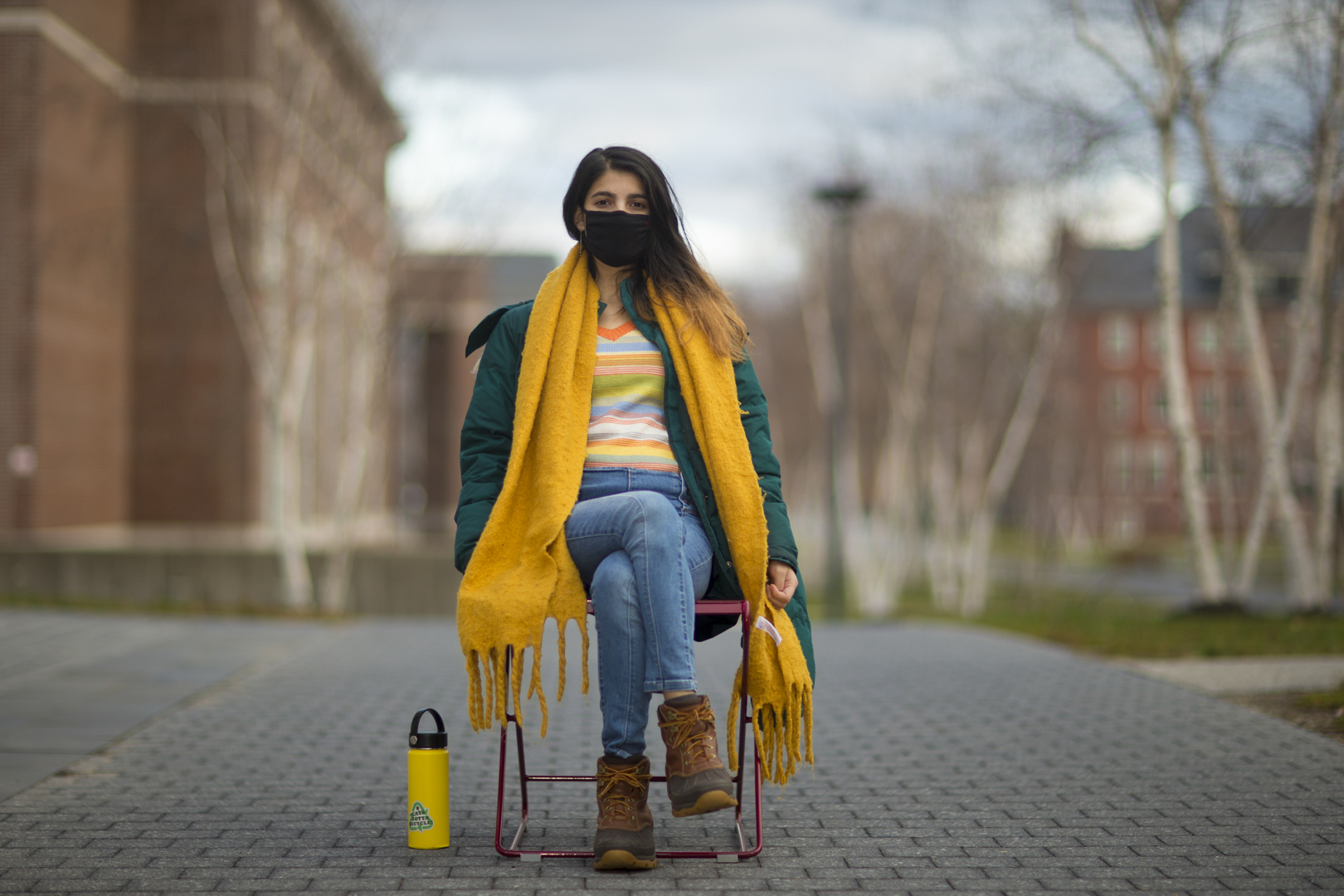 Challenge: A death in the family

Muskan says: This semester, one of my close family members died unexpectedly. If it had happened any other year, I probably would not have gone home. But just the fact that I didn’t even have a choice — that hit harder. But support from people around me in terms of the staff and professors got me through it. They were so understanding. I immediately knew I could rely on them.

Academically, what changed the most for me was the course “Presidential Campaign Rhetoric.” Everyone in the course takes part in a mock presidential campaign, conducted all around campus, featuring the two major parties. I played “Muskan Zaveria,” a U.S. senator who was the Democratic presidential candidate.

This time, we couldn’t have as many in-person events or in-person debates, which usually happens. But that provided an added challenge: We had to come up with different strategies, including using social media. It was hard, but having that group to work with and talk with — we still have our group chat — kept me sane.

For my theater major, I did one of my two required performances this semester in a play entirely on Zoom, directed by Olivia Dimond ’22. I was not looking forward to it; I did not think I had it in me. I had to be my own stage manager, my own camera person, my own Zoom manager. Now I can add to my resume: “proficient in Zoom theater”! Not a lot of people get to say that.

It actually went really well — it was the first time my family saw me act, since it was online. There were some really hard scenes there — like when I get a panic attack and where I’m crying — and my Mom said, “Oh my God, just do happy plays, don’t do sad plays.” My family thought I was crying for real. I guess that means I did a good job. 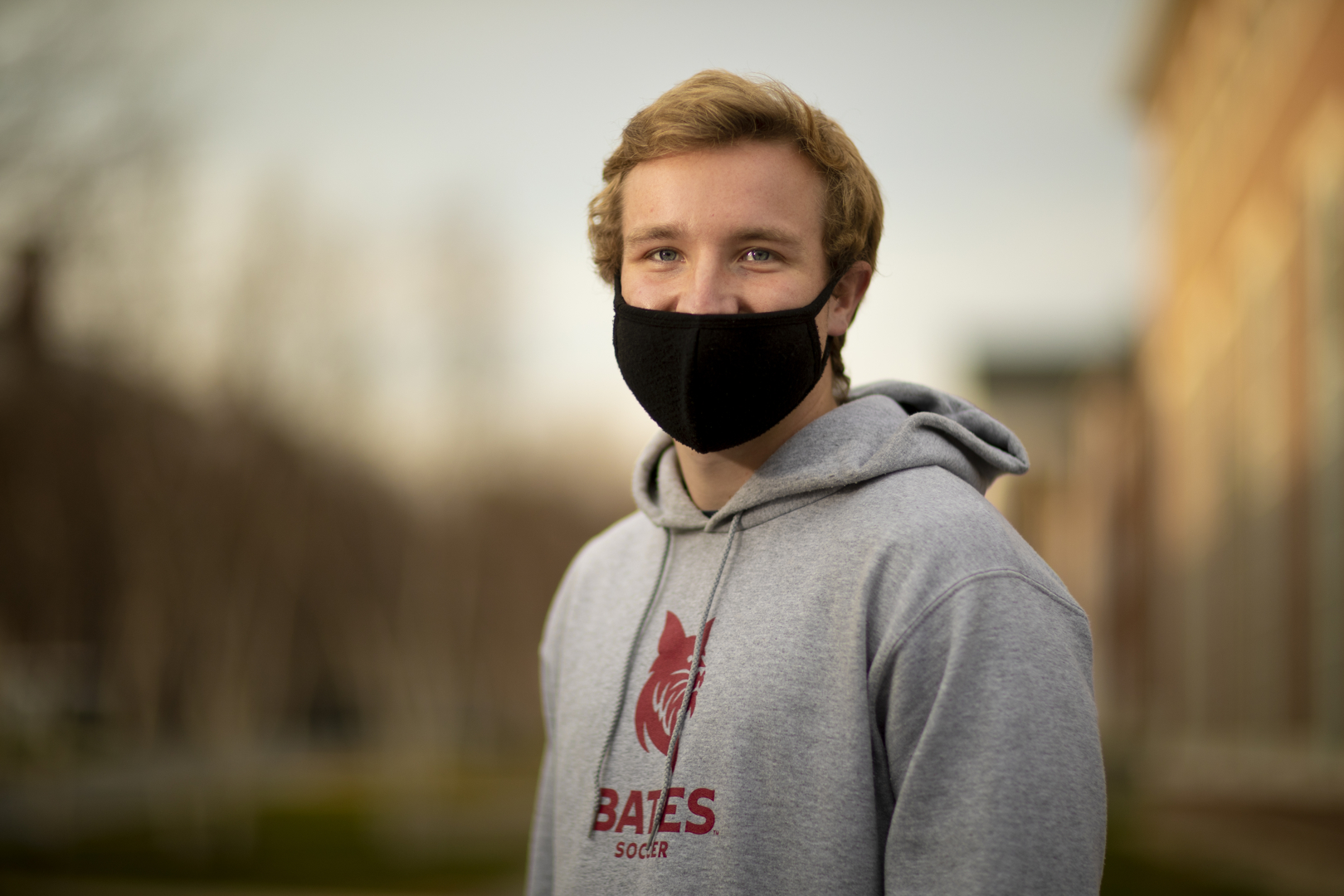 Quinn says: I’m a huge fan of in-person office hours to go over difficult concepts with a professor helping every step of the way. Adjusting to Zoom office hours has been difficult, but my professors and thesis advisers have gone above and beyond to help me succeed.

They hold extensive Zoom office hours, and in many instances they have dropped everything to hop on Zoom and help me, like 8 a.m. on a random Wednesday or right after their class or just really quick, like at 8 or 9 at night. They were so accessible. That gave me light at the end of the tunnel.

I was really worried coming in, especially writing two theses and thinking I wouldn’t be able to meet with my professors. I felt like I’d be really isolated on my own doing them. I have definitely not found that to be the case. If anything, I have probably met more with my professors. I think that goes down to availability on Zoom. 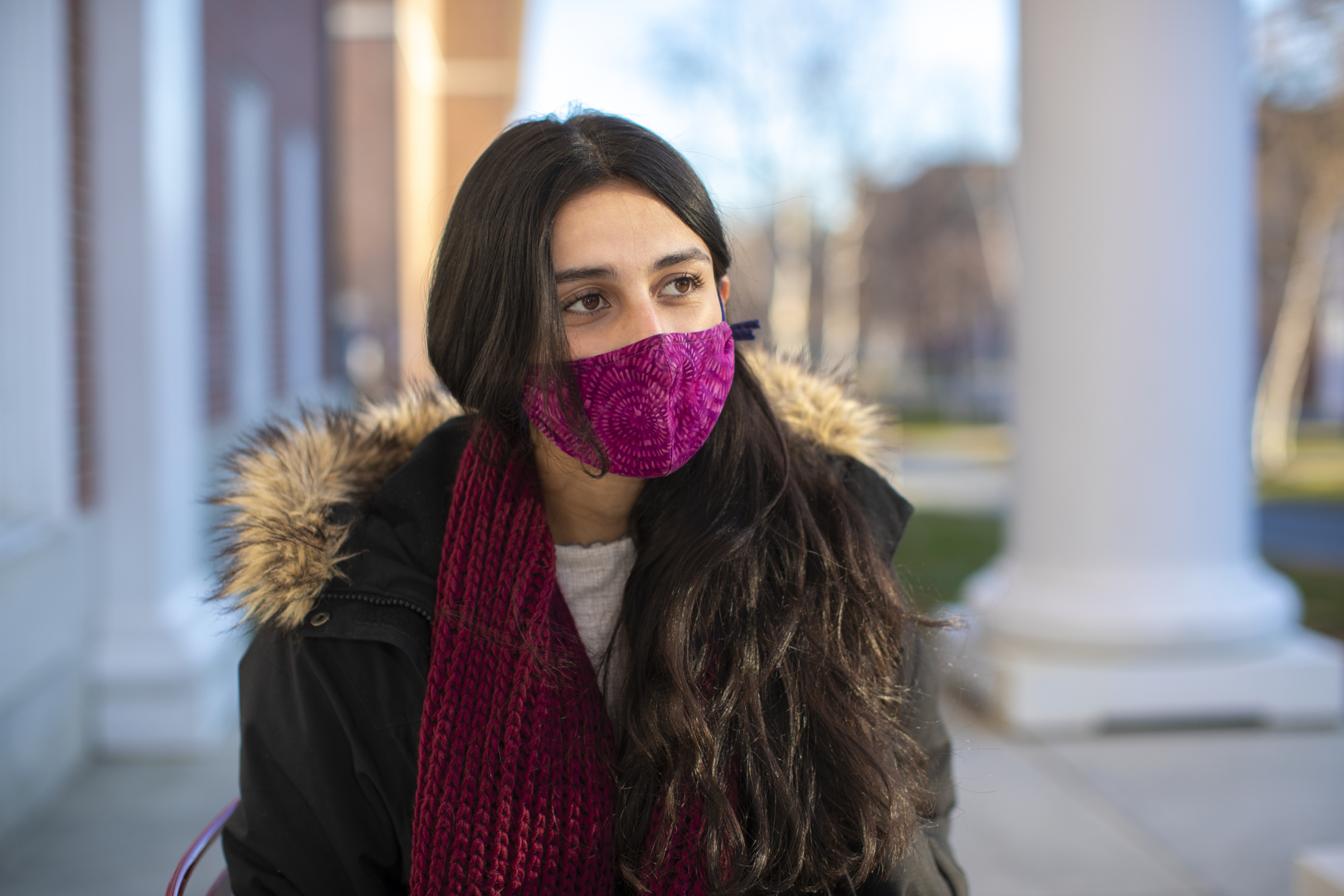 Kenza says:  This semester was bizarre — in so many ways. Still, I can now confidently say that my expectations were exceeded by a pretty decent margin.

Leading up to the presidential election, I started to feel almost frantic: academics, internship work, the political divide, the environmental crisis. I remember lying on my bed and suddenly deciding I needed to journal for the first time in my life. I wrote two pages, accidentally dropped my journal behind my bed, and then became too busy to fish it out and continue my self-care journey.

The unfortunate fate of my journal is a metaphor for what’s happening to a lot of people now. Bates students are so busy and driven that with all the added stress of the pandemic and the election, taking time to check in with ourselves was left in the dust (or behind the bed).

That’s why it’s so important to be open about the challenges you are facing, if you feel comfortable doing so. If I can help someone feel less alone simply by communicating my own struggles, then it is 100 percent worth it, to reach a mutual understanding that things are tough.

Being extra careful with people is more vital now than ever.