“Mid-April will be here before we know it,” says Chris Streifel — and by then it’s likely that Bates will have a temporary certificate of occupancy for the Bonney Science Center, which started rising on the south side of Campus Avenue 23 months ago.

“And then it’ll be mid-June, and we’ll be in the midst of a move-in,” adds Streifel, the Facility Services project manager in charge of the Bonney project. “It’s going to come fast and furious here over the next few months: lots to do to get ready and put all the final plans in place.”

One such plan involves the open space behind the science center. Currently an expanse of mud well-churned by feet and construction equipment, this area is destined for the humble but vital role of parking lot.

To make way for the resumption of site work there, Consigli Construction, the firm managing the building project for Bates, will move its team into Bonney Center offices for the remainder of their time on the project. Their portable field office, resembling a manufactured home, will disappear. That could happen by early March. 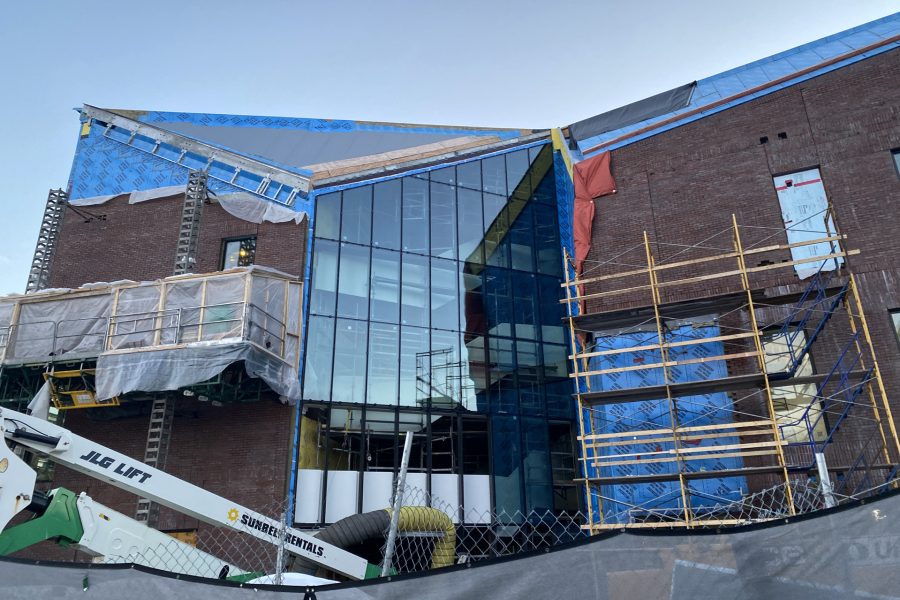 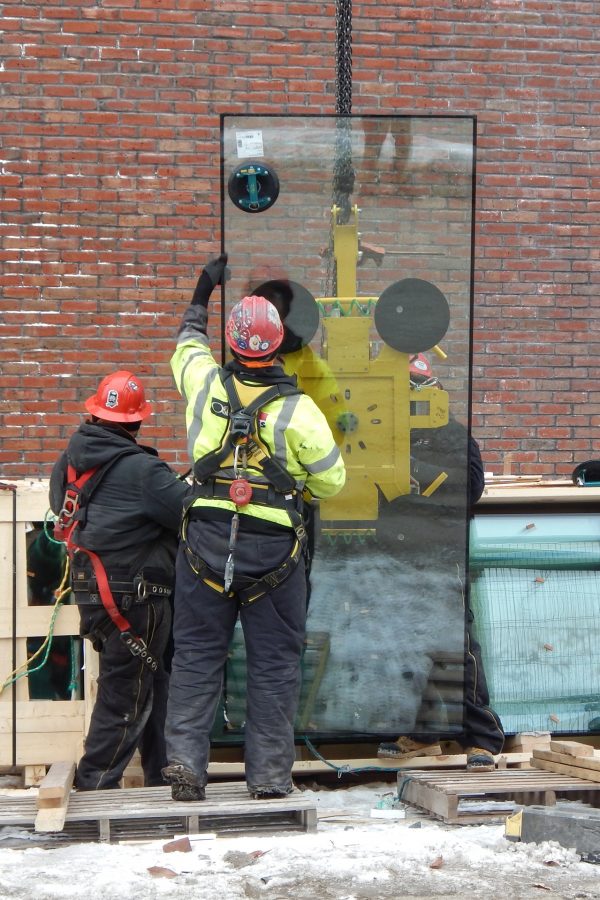 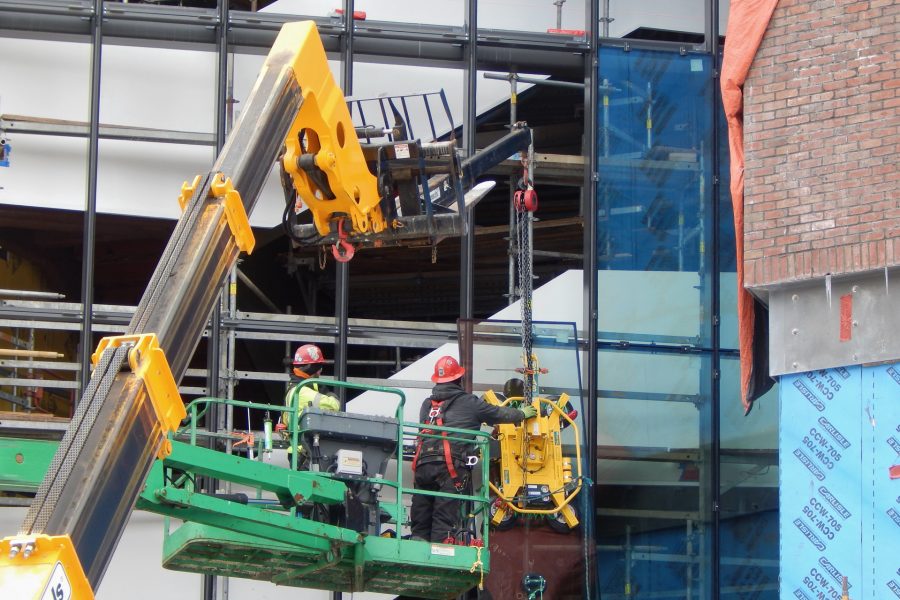 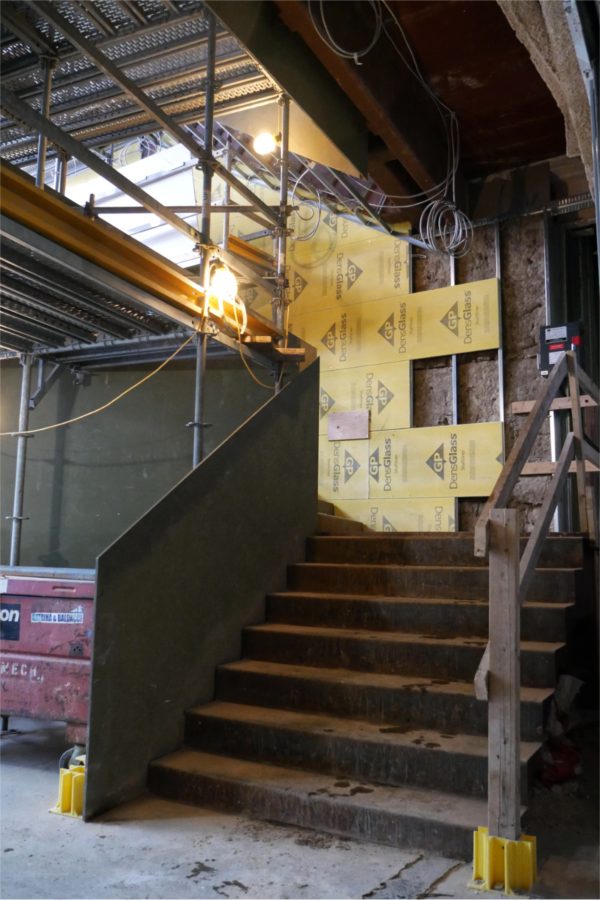 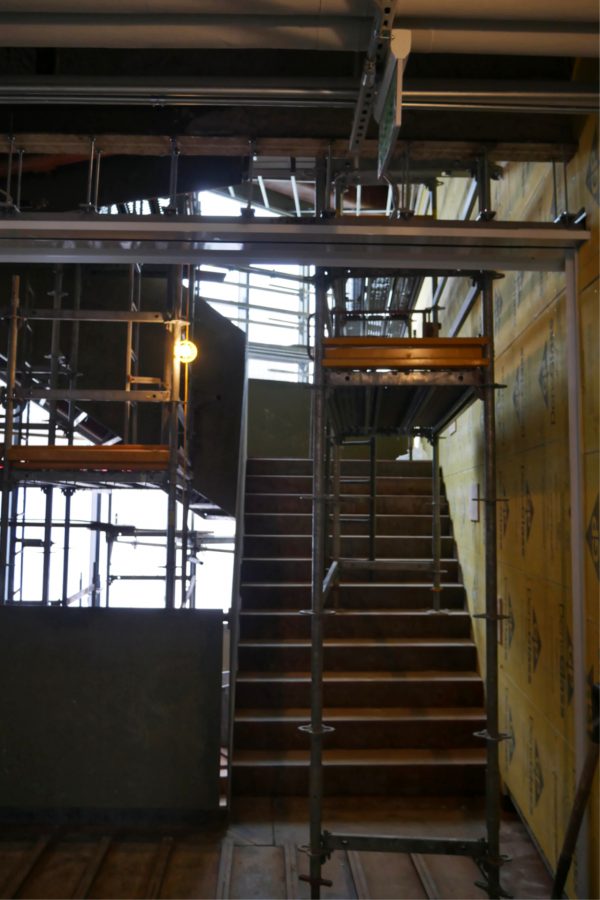 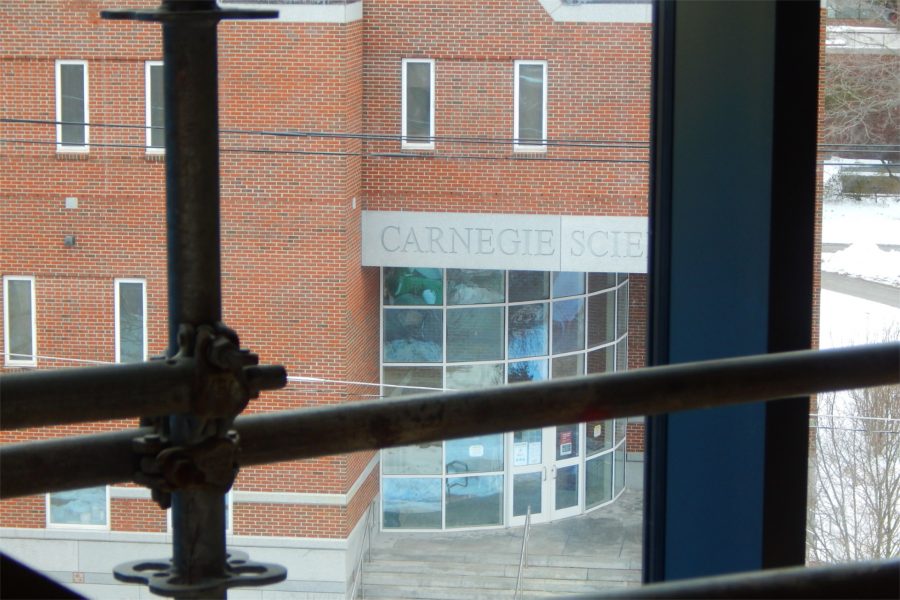 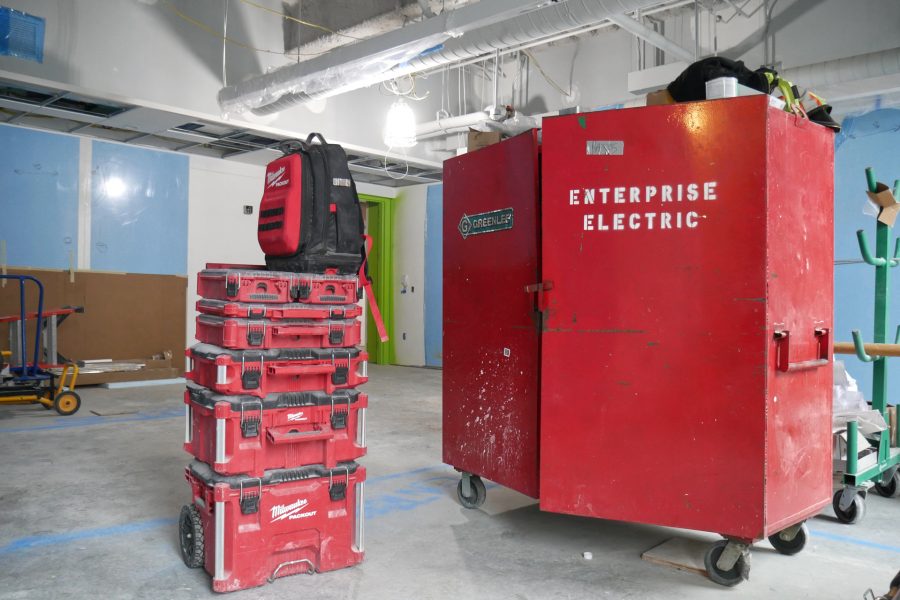 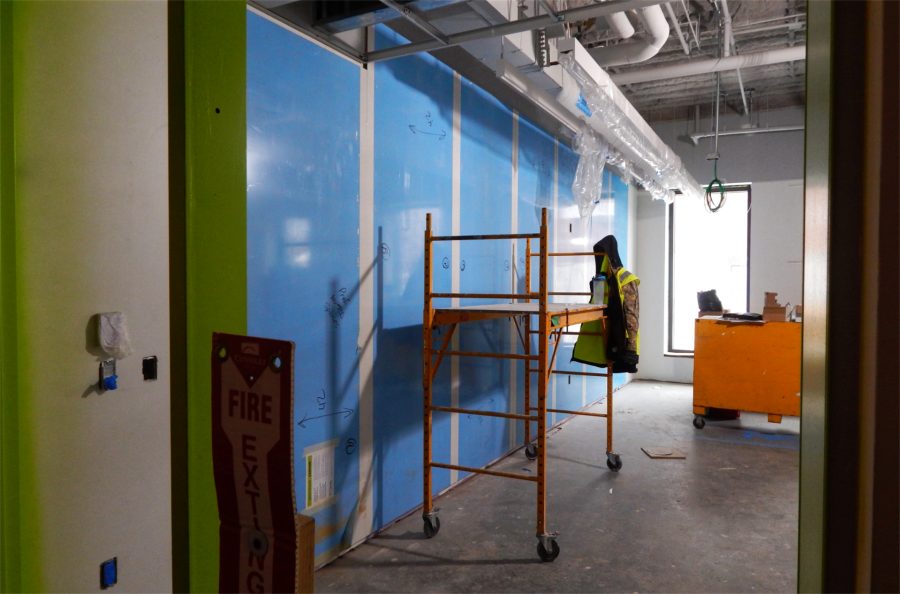 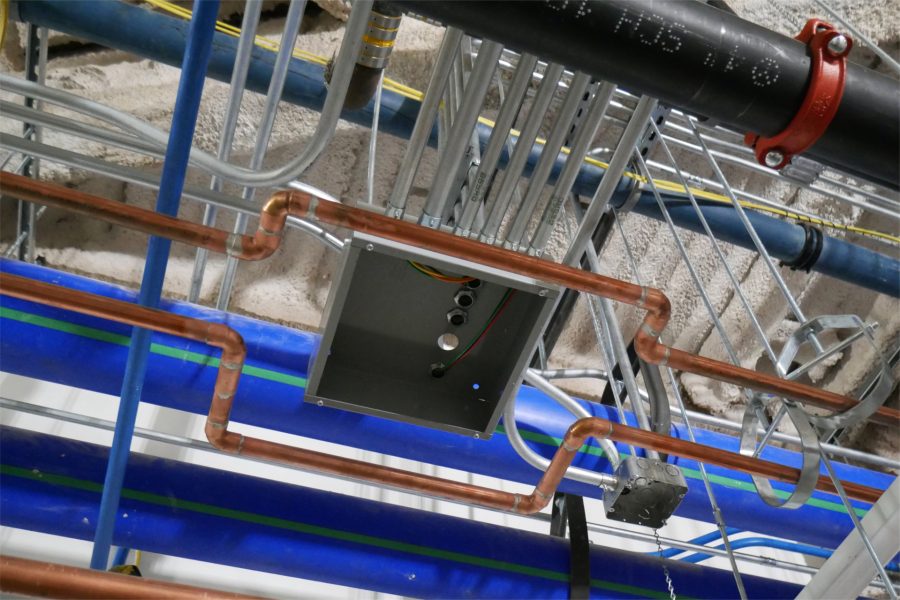 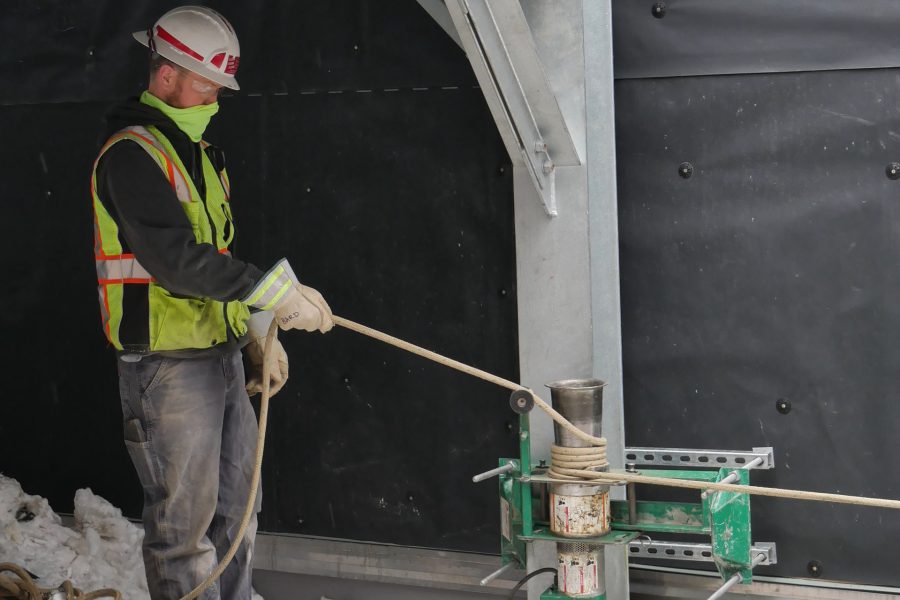 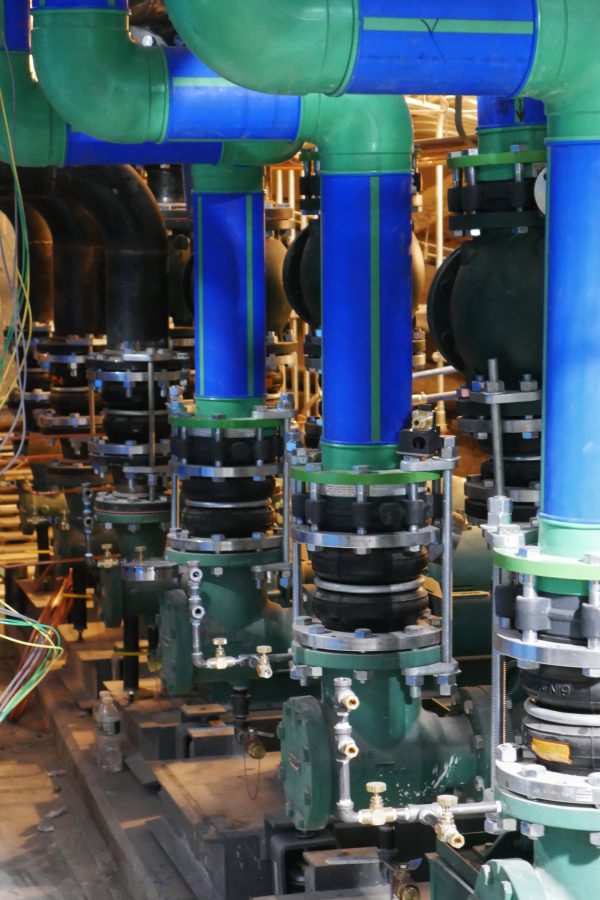 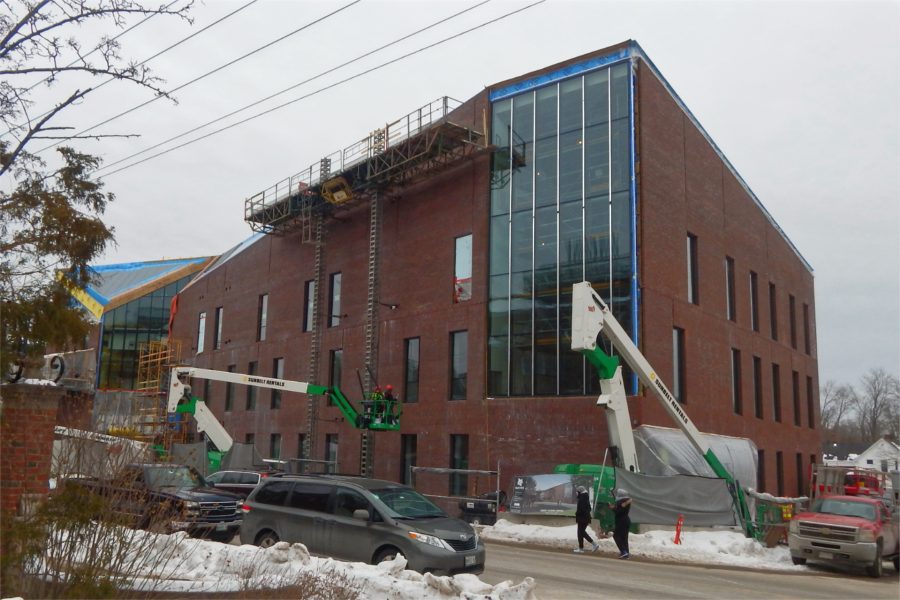 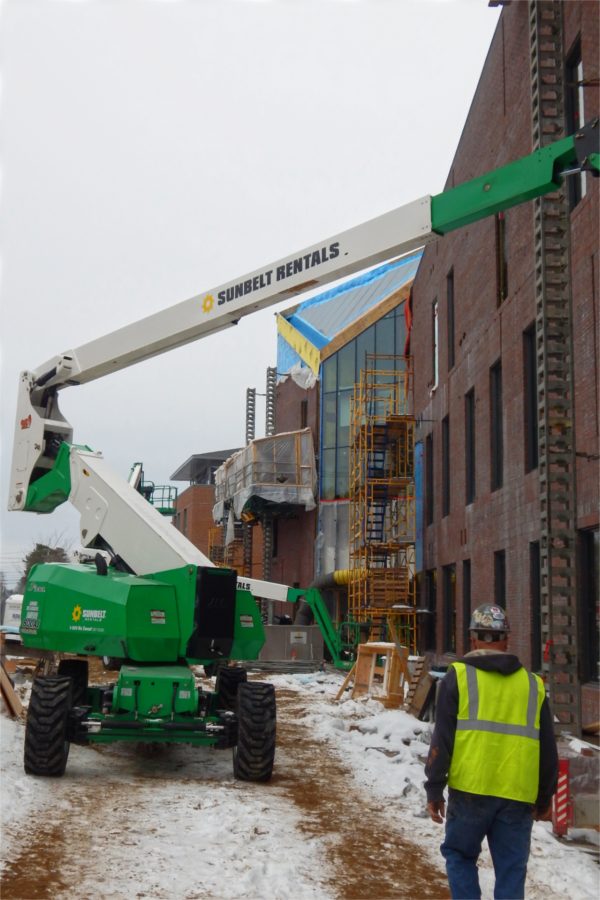 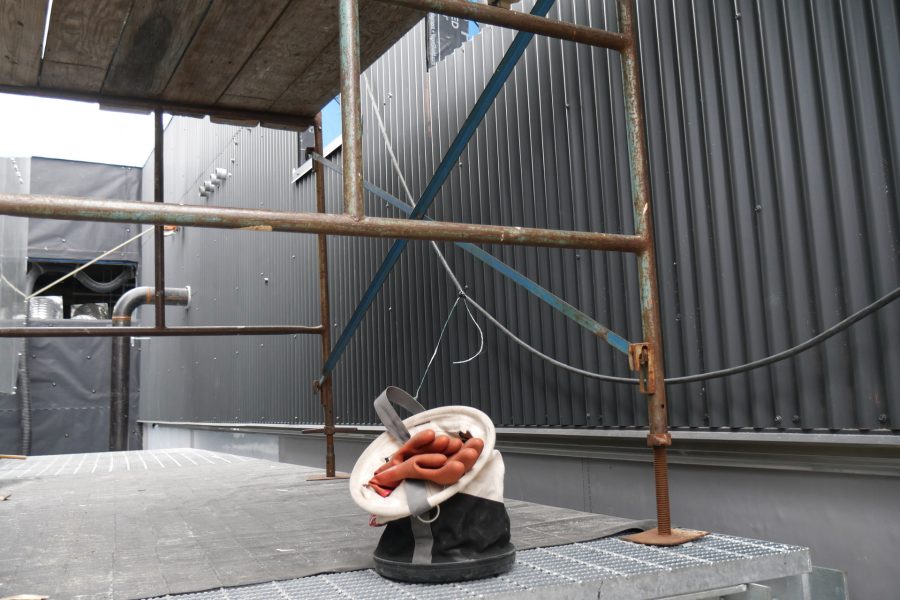 Removing the portable office “does a few things. One, it frees up space and provides more room to work” in what have been tight quarters around the new building, says Streifel. “It also just sends a signal that we are close to the end of the project — it’s time to start finishing things up.”

Moreover, moving their headquarters into the science center will put Consigli staff right on the front lines at a crucial phase of the project, which is “tough to do in the earlier stages of a project when you don’t have enough interior space” for everybody, Streifel adds. And, of course, it also saves money on the rental fee for the portable office.

Storage containers, supply stockpiles, and other resources now dispersed around the site will also start to vanish soon, as the subcontractors concentrate their resources within the building for the final phase of work. (Perhaps at last we’ll be able to return to the former Bates Communications Office location and look for that set of false teeth we left behind.)

While the exact timing of the site work is still being determined, the chores to be done are clear. Notably, the extraction of the field office will clear the way for reconstruction of the pond-like catchment basin in the back corner of the site next to Bardwell Street. That pond will detain storm runoff, thereby preventing surges into the city storm drains.

In addition, the land behind the science center building needs some excavation and the placement of soils that will serve as a stable subgrade for pavement.

In addition, Streifel explains, electrical conduits will be implanted to serve exterior fixtures like lights and security equipment. Finally, the manholes that give access to underground catch basins have to be set at their final elevations. “But all of the other stormwater work, the basins, pipes, drains and everything else, that’s all in place at this point.”

MEP–up operations: In the realm of systems Mechanical, Electrical, and Plumbing, “March will be the turn-on date for many things,” Streifel says.

Coming into view in the basement is the end of erecting and connecting MEP infrastructure, the air handlers, pumps, filtration systems, controls, wires, pipes, and myriad other things that will make Bonney a productive human environment. (One of the most striking things about touring the building the past several months, and not just the basement, has been seeing the sheer amount of hardware shoehorned into ceilings and other spaces.)

But, says Streifel, “practically speaking, we’ve still got a ways to go to get all this fully operational. It will take a couple of months, at least, before we’re feeling like there’s a clean, complete mechanical space in the basement,” not to mention the fourth-floor penthouse, which is likewise crammed with generators, pumps, boilers, chillers, etc.

In fact, while virtually no processes in the world of construction are one-and-done, getting building-scale MEP installations ready for service requires a strict routine of inspections, detailed tests, and trial runs that’s nearly as complex as the machinery itself.

That routine begins with the firm overseeing a construction project — in this case, Consigli. When all the trades involved in a given system have finished their work, Consigli will examine it and test both individual parts and the whole works. Next they’ll bring in the design team, from the Boston architecture firm Payette and the national engineering company BR+A, to take a look. For some systems, Streifel adds, the manufacturer will send a rep to “witness the start-up as part of the warranty procedures.”

Finally, there’s so-called commissioning, the round of examinations that provides ultimate quality control. Provided for the Bonney project by Cornerstone Commissioning of Boxford, Mass., commissioning agents will both witness the preliminary system run-ups and then, themselves, put the machines through their paces.

“In a building like this, it’s a very substantial effort,” Streifel says. “Once everything’s put together, it’ll take a couple of months to work through entirely. And it has already started — there’s already background work that’s being done. They’re gathering information. They’re inspecting things that they can see.”

He continues, “Once construction is fully complete, they’ll come in and do a full wring-out of everything, both individual components and complete systems.” Though fine tuning could continue through the summer or even past the building’s grand opening, in September, the bulk of commissioning will likely be complete by May.

Sharing the basement with all that technology is the vivarium. Though finishing touches such as data connections and a heavy cleaning are yet to come, construction of the vivarium is essentially complete — even to the point of dumping water on the floors to ensure that the drains work. (Now that’s the kind of technical test that even Campus Construction Update can understand.)

Elsewhere inside Bonney, the first and second floors are about on a par — light fixtures appearing, lots of finished wall paint and flooring (and cardboard protecting the flooring), casework such as counters and cabinets in place, doors and glass panels being installed. Soon, Streifel says, classrooms and offices will be ready to close off as they await final punch-list inspections. “Over the next six to eight weeks, we should see a lot” of such closures.

And as trades wrap up their work on the lower floors, they’re converging on the third floor. With the entire science center workforce likely at its peak of around 130 per day, the busyness on the third floor alone creates a certain chaotic impression. “But there’s a method to the madness,” as Streifel says.

North face: With three sides of the building looking about done, the Campus Avenue side remains something of a work in progress. And the Monumental Stair, the three-story creation at the main building entrance that will show its face to the world through a wall of glass, remains a focus of attention.

All but six of the 47 panes comprising this so-called curtain wall were installed during early February. But because of limited space around the stairway, those remaining panes, as well as the structure of the building entrance itself, won’t be installed for a while.

“There are things in there that will be hard to get to once that glass goes in,” Streifel explains. “Between the stair and the glass, there’s lighting and some final details to do, and then the final cleanup and painting of the guard rail.” In turn, the last sections of brick on that north exterior wall won’t be laid until the stairway and glass are done.

Meanwhile, at the Nichols Street end of the building, the Beacon curtain wall has been done for weeks — and seen from the street, it’s a beaut — but on the inside looking out, at the moment there’s little evidence of the swell campus views that Bonney inhabitants will eventually enjoy. Instead, all you can see is staging. (Which seems to make some sort of larger statement about the life and times of a campus-construction reporter.)

Staging dominates the Monumental Stair airspace too (although that didn’t stop us from making our first full descent of the steps during a recent visit — dude descending a staircase, in a sense, but warmly dressed). In both cases, “they’re working on all the stuff that you won’t be able to get to” thereafter, says Streifel. “All the mechanical, electrical, plumbing, fire protection systems that go in the ceiling, and the high walls and all the finishes along the top of the window.”

Can we talk? Campus Construction Update welcomes queries and comments about current, past, future, and aspirational construction at Bates. Write to dhubley@bates.edu, putting “Campus Construction” or “Realtors have that ‘staging’ issue too, you know” in the subject line.