Below is a summary of coverage of the election of Clayton Spencer by news media, social media and the Bates website. 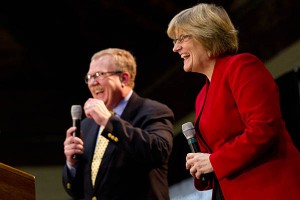 Below, a few of the Bates Facebook and Alumni Facebook comments about the election of Clayton Spencer as the eighth president of Bates College:

From a Bates student: Clayton Spencer, new #batesprez, has quite the resume. Honored to welcome our newest Batesie!

From Williams College: Congrats to our own A. Clayton Spencer ’77, who leaves @Harvard to become 8th president of @Bates in July.

From a higher education observer in St. Louis: “To my mind,” the occasional twang in these videos of Clayton Spencer, new #batesprez, is a nice touch.

From a Bates Alumnus: “Bates College has new president via @BostonDotCom.

From a Bates alumna: “We can no longer, in our society, equate wealth with excellence in higher education.” A soundbite from #BatesPrez.

During the webcast of the presidential announcement, Carine Warsawski ’07 posted a status update on Facebook: “Watching live from a Starbucks in D.C. Way to go with the technology, Bates!”

Viewers watched the webcast from 41 states:

Viewers watched the webcast from 17 countries:

Six days prior to the campus announcement, Bates Communications staffers traveled to Harvard to interview, video and photograph Clayton Spencer. The session yielded 11 video segments about her life, work and vision that attracted 6,668 plays.