It’s so crazy that we are almost halfway through fall semester.

A full year thesis used to seem so long to me—now I’m thinking it’s not nearly enough time to get what I want to get done, done. I’ve been trying to amplify alas2 so that I can get it into a plasmid and move forward with the gain of function assay. My issue right now is that my primers are amplifying all the wrong stuff!! We’re getting lots of short strands of amplified material, and are not seeing anything large enough to be the alas2 gene. We tried PCR with both cDNA and gDNA, with similar results (gDNA gel below—we wanted to see a band significantly larger than the largest ladder marker, but haven’t yet). I am still loving working independently in the lab, and problem-solving the issues I have faced thus far (we ran out of gDNA and I isolated it all on my own last week!), but am realizing that science takes a lot longer than I thought. But it’s worth it. Because when things do start to go right it’s going to be so cool! And advance scientific though in this field!! 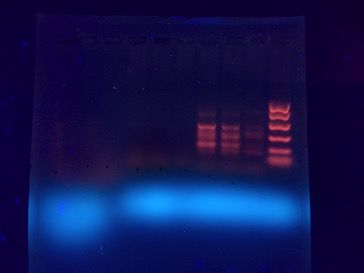 Anyways, in other news, we had a wonderful presentation by Gwen on Wednesday on transcription factors NF-E2, FLI1, and RUNX1 and their roles in mature mouse megakaryocytes. The figures in the paper were very detailed and I learned more on some unfamiliar/rusty lab techniques including gene ontology analysis, ChIP, and flow cytometry!

Gwen’s Western blots are going better now that she figured out that there was an issue with the SDS she was using (thankfully it wasn’t the gel–those things are probably expensive). Mel and Jason are killing it with the microinjections and are refining their techniques. Honestly microinjecting seems so hard they are seriously #true #scientists. Mel also is working on the confocal and working out the kinks-woohoo! We also got videotaped for a video essay Larissa needs to submit for a Women in Science grant!! We are #movie #stars. That’s all for now, happy October break!