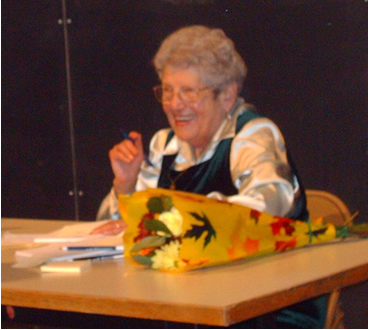 Noémi Shoënberger Ban is an award winning teacher and public speaker, respected and beloved mother, grandmother and synagogue senior who has lived in Bellingham since 1982. A native of Szeged, Hungary, Noémi Ban was 21 when the Nazis marched into Debrecen, Hungary on March 19, 1944. Ultimately her father was sent to a forced labor camp and she and her family (grandmother- Nina, Mother- Juliska, sister- Erzsebet, and baby brother- Gabor) were sent on a transport to Auschwitz arriving on July 1, 1944. Immediately separated from her family (where they became victims of the Nazi genocide) Noémi spent nearly four months in Auschwitz before being picked by Dr. Joseph Mengele to be transferred to a sub-camp of Buchenwald to work at a bomb factory. Escaping during the forced march to Bergen Belsen in April of 1945, Noémi and eleven of her campmates were found by a soldier from Patton’s army who informed them of their freedom. Finally arriving in Budapest in September of 1945, Noémi reunited with her father who also survived. Noémi was marred to Earnest Ban in October and they settled in Budapest where Earnest was a teacher.

The Soviets came into power in 1948. While living under Communist rule and control, Noémi herself became a seventh and eighth grade teacher. Reaching the point were she could no longer live under the dictates of the Communist regime Noémi, her husband, and two sons tried to escape via train to Austria. Thwarted at the border Noémi did not give up or give in. With a friend’s help she and her family, less than a month after the first attempt, finally made it to freedom in Austria by hiding in giant balls of yarn being shipped by truck from Budapest to Sopron on December 29, 1956.

Noémi and her family arrived in the United States in February of 1957 and were relocated to St .Louis, Missouri. Both she and Earnest went back to school to learn English and then pursued American college degree-Earnest teaching math, Noémi becoming a sixth grade teacher. Upon Earnest’s retirement (he was ten years older than Noémi) they came to Bellingham, Washington to be close to their son, Steven, a pediatrician. Earnest developed Alzheimer’s and passed away in 1994.

Shortly thereafter Noémi began to speak publicly about her Holocaust experience and now speaks throughout Washington state as well as traveling nationally and internationally- on her most recent trip back to Hungary she gave her talk, in Hungarian, in Debrecen where she had been taken in 1944. Noémi received an honorary Doctorate of Law in 1999 from Gonzaga University.

In the summer of 2006 Noémi returned to Hungary and Poland with 30 Washington State teachers to share with them, firsthand, her story of survival. In May of 2007 she was able to return to Poland and Hungary with her youngest son, George. Now both sons have shared with their mother by seeing first-hand where she had been imprisoned.

Noémi is also the author of Sharing is Healing written with Dr. Ray Wolpow. Autobiographical, the short book covers her camp experiences. Noémi was recently featured on Evening Magazine, a Seattle television program.

Copies of her book, Sharing is Healing, are available through her website, http://SharingIsHealing.com.