Accolades were the order of the spring for retiring racquets coach George Wigton. At the Maine tournament in May, Wigton was presented with gifts and this certificate of achievement from the Department of Athletics.

Wigton Leaves a Legacy of Class
“The Bates teams are known for their fairness, professionalism and sportsmanship: the qualities George represents. A man of impeccable integrity and perspective….”These are words printed on racquets coach George Wigton’s plaque for his induction into the National Intercollegiate Squash Racquets Association (NISRA) Hall of Fame, and that is exactly how Wigton’s athletes, family, friends, and professional peers describe the man who has coached at Bates for thirty years. Now, after four sports and hundreds of athletes, Wigton is ready to retire.

“I wouldn’t have wanted to spend my career anywhere else — except maybe Hawaii,” said Wigton dryly, observing yet another chilly early spring day at Bates.

Wigton and his wife, Eleanor, came to Bates in 1965. He took over as coach of men’s basketball after eight years at the University of Connecticut and one year at Staples High School in Westport, Connecticut. All along, said Wigton, Bates was the sort of opportunity he’d been looking for.

“Bates is exactly the kind of school I had set my sights on,” he said. “Everything I did was geared toward the job opportunity available at Bates.”

The college town where Wigton and his wife grew up, Oberlin, Ohio, had a lot to do with their ending up at Bates. “We were surprised by how much like home it felt,” Wigton said. “We both fell in love with the place and haven’t wanted to go anywhere else since.”

Bates, in turn, held onto Wigton any way they could. In his thirty years at the College, Wigton coached men’s basketball for twenty years, men’s soccer for eight years, men’s squash since its inception ten years ago, women’s squash and women’s tennis on an interim basis, and men’s tennis ever since his arrival. In addition, Wigton spent eight years as the assistant director of athletics.

Suffice it to say, Wigton’s three decades on so many different courts have made him a treasured friend of many students and colleagues. They all say the same things about him: he’s fair, supportive, and a terrific role model.

“One thing I’ve always remembered was his great attitude as a coach,” said Bud Schultz ’81, now director of tennis at the venerable Longwood Cricket Club in Brookline, Massachusetts. “He set the tone very early by saying he’d try to be fair to everyone, but just like us he’d have good and bad days. And as long as we knew that, we were on even ground.

“It was a great tone to set because we could take him as a human being, not just a figure who was a coach.”

Schultz played basketball and tennis under Wigton’s guidance and, following graduation, competed on the professional tennis tour for eight years, including all the Grand Slam events. He says Wigton had a tremendous influence on his professional life.

“He always encouraged and pushed me without ever being overbearing. He went to bat for me a number of times to give me another opportunity (at the national level), opportunities I just wouldn’t have gotten otherwise.”

Wigton’s help paid off. Schultz eventually rose to a top-forty ranking worldwide during the 1980s.

“He helped me to realize I was a good enough athlete to compete at a higher level,” said Schultz. “He made me feel comfortable and excited about going after bigger and better opportunities.”

Wigton didn’t influence only the extraordinary athletes. He influenced all the students he came in contact with, said Bob Hatch, retired director of athletics.

“What George was doing was beyond winning and losing. It’s the influence,” said Hatch.

Influencing the athlete is a big part of Bates athletics, said Hatch, a notion seconded by retired baseball and assistant football coach Chick Leahey. “Bates provided us, as coaches, with a great opportunity to be a part of what Bates was offering to students,” he said. “We knew we were fortunate to have that opportunity while Division I and II schools were getting pressure toward winning. Winning isn’t the primary expectation here. Personal relationships and the guidance you try to give is more important than wins and losses.”

And Wigton appears to be the personification of this philosophy.

“He epitomized a Division III coach,” said Schultz, “someone who cares about kids and is going to give each athlete the opportunity to go as far as he wants to go without making it the most important thing in their life.”

Although wins and losses come secondary to influencing athletes and building relationships, Wigton admits he has a competitive nature. He likes to win. For instance, the last time he went bowling was thirty years ago, when Eleanor beat him. The last time he played cribbage was fifteen years ago, when she got a spectacular hand.

But now, when it comes to coaching at least, Wigton says “the motivation is gone. You don’t get in this business if you don’t want to win. It’s not the most important thing, but it’s got to be important.”

Winning has been a big part of Wigton’s tennis teams, which have gone 172-83 in his thirty years. His squash teams have peaked in recent years, posting a 78-58 mark in the 1990s. 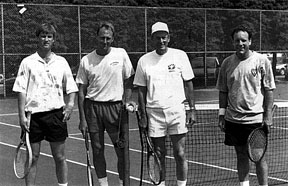 We could take (Wigton) as a human being, not just a figure who was a coach, said Bud Schultz ’81 (second from left), who returned for Reunion 1995 and a game of doubles with Wigton, former Bates player Steve Schmelz ’79 (left), and Dan Quinn ’77.”

“This last year we had the best squash and tennis team we’ve ever had. Who gets to go out that way? It just doesn’t happen,” he said. In early May, one of Wigton’s senior players, Dylan Stearns of Brattleboro, Vermont, won the state of Maine singles championship, the sixteenth time in last nineteen years a Bates player has won the state crown. The day after the finals, Bates received word it would be going to the NCAA Division III Regional Tournament — the first time ever as team.

“It’s been really nice to be able to go out on a high note,” said Wigton, who a was named East Region coach of the year at the NCAA tournament.

Wigton will be missed — both as a friend and a coach — by students and colleagues alike. And Wigton will miss Bates, too.

But Wigton is not one to get too sentimental. Smiling, he adds, “Of course, I won’t miss it so much that I’d put in a job application to come back.”