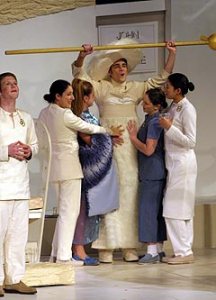 With a student cast, this stage adaptation of Huxley’s novel is directed by Paul Kuritz, professor of theater. Performances are in Schaeffer Theatre at 8 p.m. Thursday through Saturday, Nov. 8-10, and 2 p.m. Sunday, Nov. 11. Admission is $6 for adults and $3 for seniors, children and full-time students.

Written in 1931, Huxley’s famous novel envisions a future society locked into conformity, a caste system and mass production — including the assembly-line bioengineering of human beings. Loyalty to the social order has replaced romantic, familial and spiritual bonds. To ensure tranquillity the government promotes such superficial pleasures as promiscuous sex, the use of mood-mellowing drugs and consumer consumption.

The resulting disconnect between contentment and fulfillment drives the plot, as the leading characters – notably John “the Savage,” played by Andrew Akre, of the Bates Class of 2003 – martyr themselves to the cause of individuality.

Based on David Rogers’ stage adaptation, the Bates production reflects Huxley’s intention in a number of ways. For example, says Kuritz, at the players’ request he adapted material from Huxley to shift the dramatic climax from John’s suicide, where Rogers has it, back to the debate between John and the “Director,” a ruling bureaucrat portrayed by sophomore Ronald Smith.

Moreover, Kuritz says, the production emphasizes the novel’s bleak humor. “It’s very funny,” he says. “People won’t know whether to take it seriously or not.”

Finally, the production aims to simulate how the future could have seemed to people of the 1930s, when technology and mass communications were redefining Western culture. Kuritz calls the production’s acting style a kind of exaggerated “heroic realism.” Ellen Seeling, assistant professor of theater, has designed sets and costumes that evoke fanciful 1930s high tech à la Buck Rogers.

Even the music commissioned for the production creates a “retro-futuristic” effect. The composer is Alison Reid, of Boston, who does business as Treble Cove Music and writes primarily for stage and television. Reid looked to two avant-garde composers of the 1930s, Edgar Varese and George Antheil, for inspiration. Both sought to reflect the sounds of a technological society in their work (to the extent that Antheil even used airplane propellers in his “Ballet Mechanique.”)

“Trying to figure out ways to aurally represent the future as seen from the ’30s was very much in my line of thinking and a great deal of fun,” Reid says.

Sixty years into the future, “Brave New World” is a cautionary tale as pertinent as when Huxley wrote it – if not more so, in the aftermath of the terrorist attacks in September. A central theme of the novel is the precariousness of the balance between freedom and security. Nowadays, as the nation considers ways to prosecute and protect itself from terrorists, “that debate is the one that’s going on in everyone’s mind,” says Kuritz, and it resonates in the debate between the Director and John the Savage. He says the question is, “How much are you willing to trade for security and happiness?”