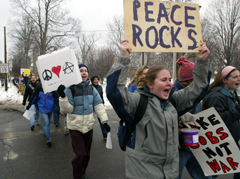 “The RA demonstrated that it can and will be deliberative, representative and willing to act,” said RA President Christopher Laconi, a sophomore from Leawood, Kan. The resolution came as a result of an on-campus petition drive that received 959 signatures, representing nearly 57 percent of the student body. Approved by a vote of 45 to 9, the resolution is the first of its kind in Maine endorsed by any college student government on the issue of Iraq, says Laconi.

military action in Iraq; moreover, we urge President Bush to seek a policy of non-violent conflict resolution, to continue to allow the inspections to take place and to work within the framework of the United Nations. We also urge Senator Snowe, Senator Collins, Congressman Michaud, and Congressman Allen to lead the President toward a policy consistent with these guidelines. We affirm our support for the men and women in our armed services; however we urge our leadership to do everything within its power to see that these lives are not risked unnecessarily.”

A group of students, deciding to act on their political beliefs concerning the potential conflict in Iraq, organized the petition drive and spent four days collecting student signatures in Commons and at various social events.

“I find it very encouraging that the RA would break from its introspection and answer the call of the 959 members of the student body to take a firm and public stance on an issue such as this,” Laconi said. “In doing so only after a healthy and constructive debate, we sent a powerful message that at Bates we aren’t afraid to speak out.”

Earlier this week, the Maine House, following in the footsteps of the Maine Senate, passed a resolution urging President Bush to use diplomacy rather than war to resolve the Iraq crisis. Should the Senate approve the House version of the resolution, the Maine Legislature would be the first in the nation to ask the president to avoid war by pursuit of diplomatic means.

Iranians of all political stripes, ages believe U.S. will attack

To heal the wounded