To heal the wounded 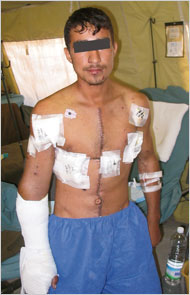 From "War and Surgery in Afghanistan and Iraq"

A book review in The New York Times praised the team of U.S. Army medical professionals, including Dr. Dave Lounsbury ’72, a retired colonel, that pushed for publication of War Surgery in Afghanistan and Iraq: A Series of Cases, 2003–2007. The Army-published book is intended as a guidebook of new techniques for battlefield surgeons, but the book’s extremely graphic photography, showing shredded flesh, disfigured faces and bloody wounds, prompted “strenuous efforts within the Army…to censor the book and keep it out of civilian hands,” according to the Times. ”The average Joe Surgeon, civilian or military, has never seen this stuff,” Lounsbury told the paper. “And they need to see this on the plane before they get there, because there’s a learning curve to this.” [More…]