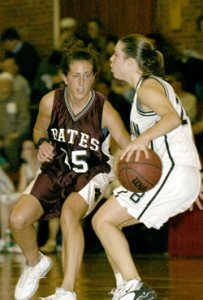 The Bates College men’s basketball team fell to one No. 1 team on Saturday, and the women suffered the same fate on Sunday as both teams were eliminated from the New England Small College Athletic Conference Championships over the weekend.

The women advanced to the championship game with a 60-51 win over Wesleyan on Saturday. On Sunday, the team rallied from a 30-11 halftime deficit to force overtime with Bowdoin, the nation’s top-ranked team. The Bobcats led 47-43 early in the extra period, but the Polar Bears scored the final eight points of the game to win, 51-47.

The men’s basketball team fell to Williams, 94-86, in the semifinal round on Saturday. The Bobcats finished the season 18-8, tying the program record for wins in a season. The team also set a record for 3-pointers in a season with 268, shattering the previous record by 60.

For more on Bates Athletics, including complete game stories from the weekend, be sure to visit https://www.bates.edu/sports.xml.