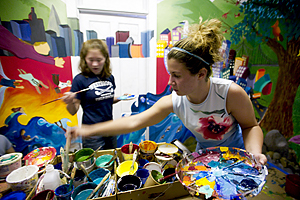 Visiting muralist Marta Ayala has collaborated with students in Assistant Professor of Spanish Felicia Fahey’s Short Term unit, “Muralismo: movimientos en práctica,” to produce a mural on the second floor of historic Hathorn Hall. The students’ wall painting will be dedicated at 2 p.m. Monday, May 24, in Room 209, and refreshments will be served. All are welcome to attend at no charge.

Students prepared for the collective effort of creating a mural, says Fahey, by learning about the history, political and aesthetic philosophy, and artistic components of mural art.

While at Bates, Ayala completed a mobile mural of her own that will be exhibited with the student art during the summer and the fall 2004 semester. A native of El Salvador, Ayala has lived in the San Francisco area for 34 years, where her murals are part of the Precita Eyes Mural Walk and appear in other public spaces. She received community awards for Best Public Art in 1998 and 2001 and was featured in the book Latin American Women Artists of the United States by Robert Henkes. 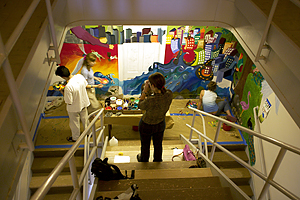 Ayala’s work “combines colorful and vibrant images and forms evoking memories from her childhood, ancient cultures, and above all, rocks, stones, and water,” says Fahey.