At Bates, ‘everyone’s been great’ to students sent by Katrina 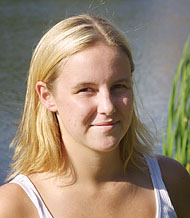 The school year wasn’t supposed to start this way.

Instead of easing into her New Orleans apartment and her Tulane University course work, Maddy O’Brien of Winthrop, Maine, found herself spending school’s first week as an evacuee 125 miles away in Lafayette, La. — one of the hundreds of thousands unsure of what Hurricane Katrina had done to their lives.

Finally, on Sept. 5, O’Brien was able to start school. Trading Bourbon Street for Campus Avenue, she is one of the 18 Maine undergraduates who have accepted Bates College’s offer of free classes this fall after Katrina shut down their institutions on the Gulf Coast.

“I was very glad to get the offer,” says O’Brien, a sophomore. “I like Bates. It seems very friendly — all of the professors have been really great about this, making exceptions to let us into classes. Everyone’s just been really great.”

O’Brien is one of 12 women who accepted the offer. She’s one of nine Tulane students, with eight from Loyola University and one, the University of New Orleans. The group includes six first-years, six sophomores, two juniors and four seniors. Seventeen of the visitors are carrying a full course load at Bates, and seven are buying room and board here.

O’Brien had moved into her apartment, about a mile from Tulane, the week before the storm. She had driven south in her mother’s van with her brother and a neighbor who wanted to see New Orleans.

“We wouldn’t have known about the hurricane, actually, if it hadn’t been for my roommate’s dad,” she explains. Their Internet, phone and cable services had been scheduled to start the day after the storm. “We had no idea.”

“My roommate’s dad stopped by on Saturday and said, ‘You need to evacuate.'” Joining the masses fleeing New Orleans, O’Brien and her group were stranded on the highway after a collision disabled the van. A friend finally brought them to Lafayette. “It all went wrong,” says O’Brien, with a rueful laugh.

“I have never seen a hurricane in my life, so I was really scared” during the evacuation, she says. She was worried, too, about her friends from Tulane. “And about my parents, who were 1,400 miles away and couldn’t do anything except talk to us on the phone, and we were all a mess, trying to keep it together for them. But you really can’t.”

In the event, all her friends made it through the cataclysm and Lafayette suffered little compared with the coast. O’Brien has vivid memories of standing outside her hotel watching the storm-roiled sky in the distance. “We could see the clouds going sideways, just swirling around. And the sky was bright red and orange, and above the red and orange it was green on the clouds.”

According to one estimate, some 100,000 students were displaced from 30 Gulf Coast universities and colleges by Katrina. Here at Bates, as grateful as they are for the college’s welcome, it will take some time for the students that Katrina sent to settle in and focus on the future.

Genevieve “Gigi” Johnson, a Loyola first-year from Addison, Maine, holed up during the storm with friends in Monroe, in northern Louisiana. She spent her week there phoning colleges, looking for a spot. “I really just wanted to know what I was going to do with this semester, because I knew we weren’t going to be able to go back,” she says. 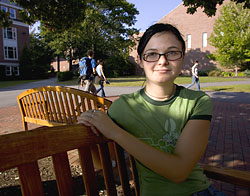 “It was supposed to be my first semester of college and I didn’t want to get behind. It was really stressful.”

But the Maine students at Bates know full-well that they got off easy. “I feel awful for the people and the city of New Orleans,” says Brett Chalke, a Tulane sophomore and Auburn resident. “During my freshman year, I came to love the city for the kindness of its citizens and its character. I’m eager to get back — I know it’s the place where I want to spend my college career.”

Johnson agrees. She’s now staying in Litchfield — a far piece from the Big Easy in more ways than just distance. “New Orleans seemed so full of its own history and its own culture, and it was so different,” Johnson says. “And Loyola’s really laid back — it was a good fit.”

She rejects the idea put forth by some that New Orleans can’t or shouldn’t, due to its location, live again as it was. “I don’t think anybody who’s ever been there would ever say that,” she says. “Everybody who lives there has so much pride in New Orleans. There’s no way they’d let it disappear.”

Read more about Bates’ contributions to the Katrina relief effort at the links below.