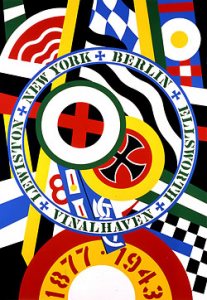 Coming to the Bates College Museum of Art in October are an exhibition of prints by Robert Indiana and a symposium relating the visual arts to cryptozoology, the study of unknown, rumored or hidden animals.

To mark the opening of his exhibition Robert Indiana: The Hartley Elegies, renowned Vinalhaven artist Robert Indiana offers a lecture at 4 p.m. Saturday, Oct. 1, at the college’s Olin Arts Center, 75 Russell St. The exhibition consists of 10 prints made in homage to Marsden Hartley, a pioneering American modernist with whom Indiana finds artistic and personal kinship. The exhibition runs through Dec. 17.

A reception follows. Admission to the museum and its special events is free. For more information, call 207-786-6158 or visit the museum on the Web.

The Indiana event is part of a rich schedule for Parents and Family Weekend 2005 at Bates. Also on tap for the weekend are the annual Cultural Extravaganza produced by Amandla!, a student organization exploring issues of African and African American culture; a talk by political humorist Al Franken and a student art sale to benefit the Katrina Relief Initiative at Bates.

Treating issues of cryptozoology, science and art, the symposium Out of Time Place Scale takes place at the museum Friday and Saturday, Oct. 28-29. Friday’s keynote speaker is cryptozoologist Loren Coleman, an authority in the field and the founder of the Cryptozoology Museum in Portland, where he lives. An exhibition relating to cryptozoology opens at the museum in June 2006.

Dedicating much of his art to the visual power of words and numbers, Robert Indiana may be best-known for his image of the word “LOVE” set in two lines with a tilting “O.” Originally created in 1964 for a Museum of Modern Art Christmas card, the image became a symbol of the 1960s counterculture. It appeared on a U.S. postage stamp in 1973 and has been adapted for a variety of media, including sculpture.

A resident of the Maine island of Vinalhaven, Indiana published The Hartley Elegies in the early 1990s. The imagery comes from Hartley’s 1914-15 “German Officer” paintings, created after the death of the soldier Karl von Freyburg, an event that devastated Hartley. In his distinctive hard-edged style, Indiana unites military symbols and geometric forms with references to Maine, America, war and history to create a series of symbolic portraits.

“With the largest holding of Hartley materials in the state, the Bates Museum of Art is pleased to present the ‘Elegies’ in recognition of Indiana’s and Hartley’s ties to Maine and their stature as American artists,” said museum director Mark Bessire.

To commemorate the college’s 150th anniversary and the museum’s 50th, the museum is introducing the Collection Project, a series of books and exhibitions looking critically at the museum’s art collection. The Hartley Elegies begins the project with the exhibition and a hardcover book with an essay by art scholar Susan Ryan.

Cryptozoology, the study of animals that roam the unmapped regions between reality and legend, has given us the quests for the Loch Ness Monster, Bigfoot and the Abominable Snowman. But it has also revealed animals that are now part of the classified natural world.

Cryptozoologists are often maligned as crackpots or publicity hounds — until a “real” discovery is made and previously skeptical scientific authorities shamelessly celebrate the “find,” as in the cases of the giant panda, the komodo dragon and the coelacanth. Then cryptozoologists go on to the next search and the cycle begins again. This consensus subjectivity offered in the guise of objectivity is the linchpin linking the practices of cryptozoology to those practices of contemporary art.

It’s a pursuit, says Bessire, “where the disciplines of science and art share a mutual focal point: a desperately desired visual encounter.”

Coleman’s books include Tom Slick: True Life Encounters in Cryptozoology (Linden Publishing, 2002); Bigfoot! The True Story of Apes in America (Paraview Pocket Books, 2003); and The Field Guide to Lake Monsters, Sea Serpents, and Other Mystery Denizens of the Deep (Jeremy P. Tarcher, 2003), of which he is a co-author.

Artists attending the symposium include Rachel Berwick, Ellen Lesperance, Mark Dion, Sean Foley, Alexis Rockman and Jeffrey Valance. A publication and film series will be produced in conjunction with the 2006 cryptozoology exhibition. The exhibition is curated by Bessire and Raechell Smith, director of the H&R Block Artspace at the Kansas City Art Institute, and is organized by the Bates museum and the Block Artspace.

The third annual Cultural Extravaganza takes place at 7:30 p.m. Saturday, Oct. 1, in the Olin Arts Center Concert Hall. The show celebrates the African cultural heritage through dance, drumming, spoken word and fashion. This year’s show features performances by students as well as guest artists Prophecy Dance Works of New York City. Appropriate for all ages, the event is free and open to the public. For more information please contact Melisa March at this mmarch@bates.edu.

The art sale benefiting the Katrina Relief Initiative takes place from 10 a.m. to 4 p.m. Saturday in Perry Atrium, Pettengill Hall. Refreshments are available. A $20 donation buys a piece of art or refreshments served by the Ronj, with proceeds going to the KRI fund.