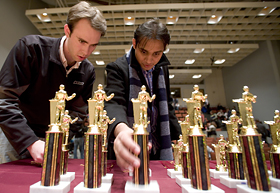 For the third consecutive year, the Brooks Quimby Debate Council hosted a Maine high school forensics tournament. Approximately 315 students took part in the all-day event on Saturday, Nov. 19. A scheduled tournament for the 2005-06 season of the Maine Forensics Association, the judged competition featured events in speech, Lincoln-Douglas and public forum debate and student congress. The MFA promotes the development of articulate leadership among secondary students throughout the state.

Bates College junior Vaibhav Bajpai of Calcutta, India, organized the Bates College Forensics Tournament with the help of his debate teammates and their coach, Bryan Brito, director of debate at Bates. Lewiston

This year, Bates added the category of public forum to the tournament and increased the number of high school competitors by 55. “We hope to keep growing this tournament in order to develop a closer connection with the high school debate and speech community in Maine,” Bajpai says. 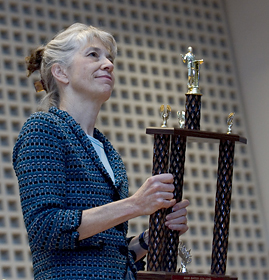 To support the tournament, the Quimby Debate Council received funding from the offices of the president and dean of students and the Harward Center for Community Partnerships.