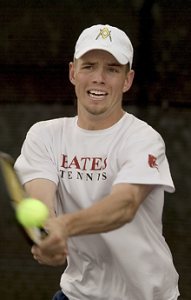 The Bates College men’s tennis team was selected to participate in the NCAA Division III Men’s Tennis Championships for the seventh straight year on Monday, the longest such streak of any athletic program at Bates.

Bates is the fourth seed in the field at Williams College and will play the host Ephs (12-3) this Saturday, May 6. The winner will face the winner between Trinity College (13-3) and Bowdoin (7-10) in the second round for the right to move on to the quarterfinal, semifinal and final rounds at the University of Mary Washington May 17-22.

The selection of teams is based on won-lost record, strength of schedule and eligibility and availability of student-athletes. The selection committee considered team results in collegiate matches play from Sept. 6, 2005, until the time of final selections.