The women’s rowing team is seeking its third straight national title at this weekend’s NCAA Championships in Indianapolis, and it’s a veteran squad:  The only first-year in either varsity boat is Lily Kinder ’22 of Pike, N.H.

Not only is she new to Bates, she’s new to the sport.

“When I came to tour Bates, I talked to one of the assistant coaches just out of fun to see if they allowed walk-ons,” Kinder said. “And they were like ‘Yeah, come on in, you’re welcome!’”

In fact, a key to Bates’ rowing success is how the program embraces novices.

Following Friday’s heats, the Bobcats look to clinch their third straight national championship in Saturday’s grand finals. The second varsity eight grand final is set for 11:12 a.m. EDT and the first varsity eight follows at 11:36 a.m. Both races will be livestreamed.

“We look for people who just come to us on their own and they’re interested in excelling at something, and trying something new,” NESCAC Coach of the Year Peter Steenstra said. “Once you realize that this sport is similar to stacking wood, it’s just a matter of repetition.”

Kinder embraced her opportunity, and her teammates love having her on the team. 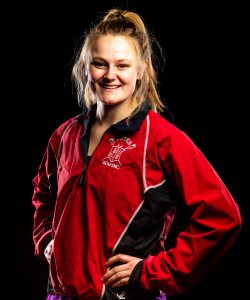 Lily Kinder ’22 of Pike, N.H., is the sole first-year competing for Bates at this weekend’s NCAA Rowing Championships. (Brewster Burns for Bates College)

“A lot of practices, right when we finish, she’ll turn around and smile at me, or I’ll tap her back or give her a high five, and it just makes me smile, and makes me really happy,” said co-captain Claudia Glickman ’19 of Bellaire, Texas.

“And she’s always smiling, always in a good mood, so excited to be here.”

Glickman and another Bates co-captain, Sophie Claus ’19 of Beverly, Mass., were both rowing novices when they first stepped on campus in 2015.

“Rowing is amazing in that you can try it for the first time as a freshman in college, so I decided to give it a shot and found the team to be absolutely incredible and the most welcoming toward novices, which you don’t always find,” said Claus.