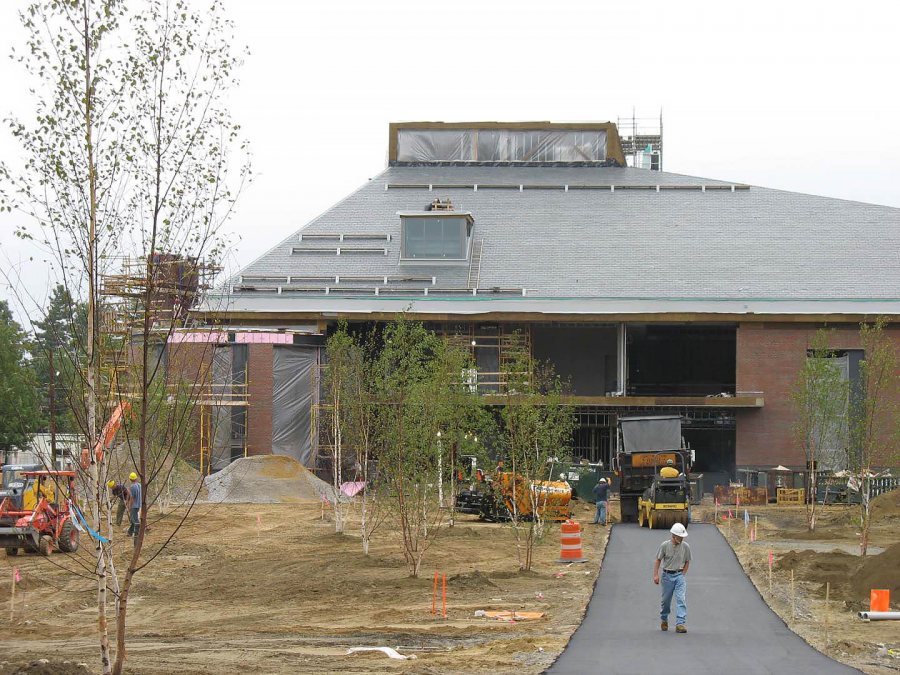 It was close quarters in front of Pettengill Hall as a chain-link fence choked the space and busy people maneuvered around each other.

A photographer sought a vantage point for the most dramatic view of the hubbub. A young guy pushed a groaning wheelbarrow full of mortar toward the masons paving the Pettengill entranceway with gray asphalt blocks and a shiny granite border.

The soundscape was crowded, too, with the racket of full-tilt construction activity. Some distance away, near the new dining Commons, excavators clawed at the dirt, bulldozers rolled to and fro, and other machines made chess moves with paper birch saplings. Workers in hardhats stood in consulting in groups or milled around with tools and clipboards. 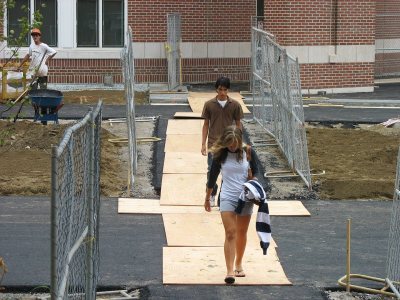 And periodically amidst all the bustle, some of the people for whose benefit all this is happening appeared. Singly, in pairs and in backpack-toting, just-back-from-AESOP flocks, Bates students found the new Alumni Walk crossing — intent on their business and scarcely looking at the work site.

That was the scene on Friday, Aug. 31, as construction crews rushed to get much of Alumni Walk ready for traffic. The short-term objective is to open the walk from College Street as far east as Pettengill Hall. The entire walk won’t be finished for weeks, and even in the section soon to open, landscaping chores, the placement of benches and lights, and similar work will continue.

While there is much to say about the greater significance of the walk to the evolution of the Bates campus, the anticipated partial opening will have an immediate practical effect: After months of fenced-off walkways, closed building entrances and unpredictable access, it’ll suddenly be a lot easier to get where you’re going. 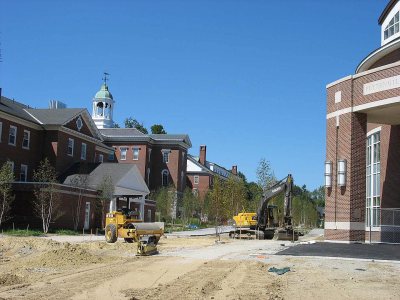 The walk in front of Pettengill. (Doug Hubley/Bates College)

Newly opened is the entrance to Alumni Walk between Hedge Hall and Dana Chemistry. It leads through a fenced corridor across the work zone to Pettengill. The Z-shaped, fenced corridor that led from Pettengill through no-man’s-land is closed — no more going mano a mano with dump trucks and power shovels.

With work winding down during the last week of August on steam vault No. 1, in front of Pettengill, workers went full speed ahead with the cosmetic work that turns a bunch of dirt into an Alumni Walk: grading, paving, planting. In fact, one of the walk’s two main pathways — the narrower northern lane — has been blacktopped all the way to its terminus near the new Commons. 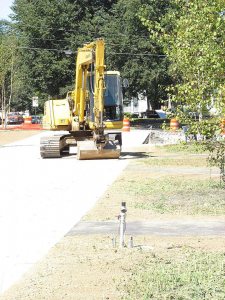 The last of the 178 or so paper birches should be in place by the Labor Day weekend, including several planted in front of Roger Bill as a way to blend new and old landscapes. Hydroseeding of grass has begun, and sod will be laid in the coming weeks. Needless to say, most of the lush crop of weeds is history. (But read a sidebar on the topic.)

Several new entranceways to buildings facing the walk have been paved. The long-awaited dark-gray granite for those entranceway borders arrived Aug. 22. Finally, as project manager Paul Farnsworth noted, light poles have arrived and the concrete benches for the walk are being cast, with installation to begin soon.

(Note to readers: Because of a change in the schedule for Alumni Walk work, the preceding section of this article has been revised since it was first published, on Aug. 31.)

Getting around: The path from North Bardwell Street to Central Avenue and the athletics facilities is paved and open for traffic.

And with the recent shrinkage of the fenced-off Commons work site, it’s once again possible to wiggle past the north side of Alumni Gym to get to Central Avenue. Just be sure to admire the big green Cummins backup generator for the new Commons as you go by.

New student housing: Speaking of steam vault No. 1, one of the last items on its particular checklist was testing with live steam. Facility Services fired up the campus steam plant on Aug. 30 and opened the new pipes as far west as vault No. 1. 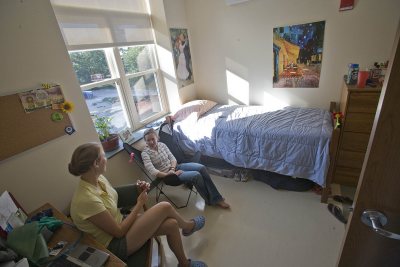 The following day, the lines were opened as far as 280 College St., the new student housing, so that the heat exchangers could be checked. The building relies on central steam both for heat and, in the cold weather, hot water.

Project manager Pam Wichroski reported that — for the most part — “the building is pretty much complete. The students have access to everything.” With the installation on Aug. 28 of a commercial-grade stove, the residence’s kitchen was ready for use. The laundry room, too, was made serviceable during the last week of August.

Still unfinished is the fireplace lounge, in the center section. Also remaining are what Wichroski called “punch-list items” — construction defects needing to be fixed — and mechanical testing.

New dining Commons: The division of space inside the new Commons is all but complete, with most interior walls framed in and many drywalled. The space will continue to change, for sure, but it’s easy to get a sense of how the finished building will feel.

The corner closest to Central Avenue and Alumni Gym, containing the kitchen, serving areas and the “back of the house,” is already a warren of corridors, offices, mechanical and service spaces, and shiny metal coolers. The pizza oven is in place, ringed by a snazzy lighting soffit, and exhaust hoods mark where other serving stations will appear. 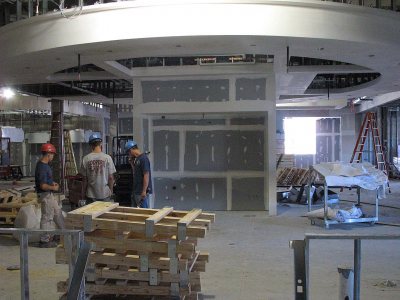 Floor tiles in the kitchen and in some bathrooms have been laid and grouting was being done during the last week of August, Farnsworth noted. “Once the floor is down, the kitchen equipment guy will be back.”

An east-west interior corridor will link Alumni Walk with the path that crosses Central Avenue toward Merrill Gym. This “Arcade” will be punctuated with a convenience store, an open dining area equipped with booths, and in the northwest corner, a round fireplace lounge.

Upstairs, the main corridor is lined with large and small conference rooms, including one whose high-tech sound system will amplify conferees’ voices by means of microphones way up near the ceiling. (So much for “tap, tap, is this thing on?”) At the northwest corner, a balcony over the fireplace lounge connects with conference rooms to form a suite with knockout views of Pettengill Hall and Alumni Walk.

Finally, there’s the dining area. Its ceiling, still unfinished, is already an object of fascination, soaring up to a point dozens of yards up.

The ceiling will ultimately be sheathed with wood — but the prep work “was quite an exercise in layout,” Farnsworth explained: The wooden sheath will comprise two alternating widths of board, and the sprinkler heads and light fixtures need to poke through the centers of the wider boards. 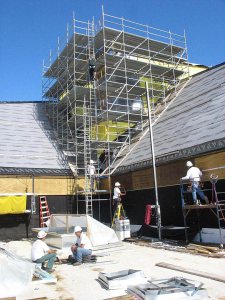 “The sprinklers have to be symmetrical to meet code, and we want the lights symmetrical, and we had to hit the wide boards, which are going up four differently angled sides,” Farnsworth said. “They got it figured out.”

One of the building’s showpieces will be a grand stairway at the north side near the lounge. In something of a milestone, the first piece of structural steel for that feature was placed during the last week of the month. But, added Farnsworth, “they’ve got a lot more steel up for stairway No. 2, which goes from the dining hall up to the mezzanine.”

The steel work, Farnsworth added, is being done by a custom metalworking shop in Turner called Accidental Anomalies.

On the outside, weatherproofing the giant boxlike ventilation monitor on the roof is finished, clearing the way for workers to lay slate on the southern face of the roof. The monitor will be revisited in October to remove temporary weather barriers and install glass in a southeast-facing skylight.

And, with the exterior masonry work all but finished, workers are installing elegant gray zinc trim around the building. “You’ve got to look at the overhang at the east entry,” Farnsworth told Campus Construction Update. “It’s gorgeous.” 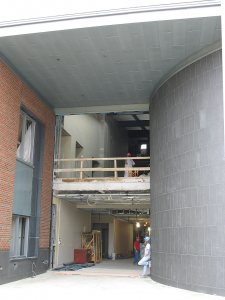 Can we talk? What do you think about the campus improvements process? What would you like to know about it? What do you know that we don’t? We want to hear from you. Please e-mail your questions and comments to this Doug Hubley, with “Construction Update” in the subject line.

Aug.30:
So which one’s the pigweed again?