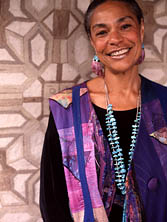 Sara Lawrence-Lightfoot, a sociologist and professor of education at Harvard University, will give a presentation titled “Balm in Gilead: On Love, Justice and the Word, ” at 7 p.m. Monday, Nov. 5, in the Edmund S. Muskie Archives, 70 Campus Ave., at Bates College. The public is invited to attend the 2007-08 Bertha May Bell Andrews Lecture, sponsored by the Office of the Chaplain, free of charge. For more information, call 207-786-8272.

The daughter of an Episcopal priest and schoolteacher, Lawrence was raised in Mississippi. In the 1930s, she attended Cornell University, where she was the only Negro undergraduate, was barred from the dorms and served as a maid in professors’ homes to earn her keep. She then went on to medical school at Columbia University, where she was the only African American and one of 10 women in her class.

“Her life has been one of courageous boundary crossing; enduring the visibility and distortions of tokenism, and the double oppressions and assaults of racism and sexism,” writes Lawrence-Lightfoot. “But ‘the history,’ as Margaret would say, is much more interesting than ‘the facts,’ the interior story much more poignant than her professional persona and the public acclaim.”

Lawrence-Lightfoot’s lecture will focus on the emotional, spiritual and political landscapes of her mother’s extraordinary life and on the power of storytelling as she forged her identity as a woman, wife, mother, scholar, clinician, writer, activist and advocate for peace and justice.

Lawrence-Lightfoot has studied the culture of schools, the patterns and structures of classroom life, the relationships between adult developmental themes and teachers’ work, and socialization within families, communities and schools.

A prolific author, Lawrence-Lightfoot’s book The Good High School: Portraits of Character and Culture (Basic Books Inc., 1983), received the 1984 Outstanding Book Award from the American Educational Research Association. Balm in Gilead: Journey of a Healer (Addison-Wesley, 1988), won the 1988 Christopher Award, given for literary merit and humanitarian achievement. Her newest book, The Essential Conversation: What Parents and Teachers Can Learn From Each Other (Random House, 2003), captures the crucial exchange that occurs between parents and presents a dialog that is both mirror and metaphor for the cultural forces that shape the socialization of our children.

A former chair of the John D. and Catherine T. MacArthur Foundation Board of Directors, Lawrence-Lightfoot received the prestigious MacArthur Prize Award in 1983. In 1993 she was awarded Harvard’s George Ledlie Prize, given for research that makes the “most valuable contribution to science” and “the benefit of mankind.”

Lawrence-Lightfoot received 26 honorary degrees from colleges and universities in the United States and Canada. In 1993, the Sara Lawrence-Lightfoot Chair, an endowed professorship established at Swarthmore College, was named in her honor. And in 1998, she received the Emily Hargroves Fisher Endowed Chair at Harvard University, which upon her retirement, will become the Sara Lawrence-Lightfoot Endowed Chair, making her the first African American women in Harvard’s history to have an endowed professorship named in her honor.

A signature talk at Bates since 1975, the Andrews Lecture is a memorial to Bertha May Bell Andrews, who served on the Bates faculty from 1913 to 1917 and established the women’s physical education program at the college. Her son, Dr. Carl B. Andrews of the Bates class of 1940, established the lectureship.