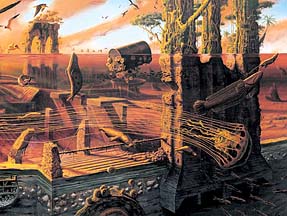 Usually closed on Sundays, the Bates College Museum of Art will open its doors from 10 a.m. to 5 p.m. on Dec. 9 to provide visitors with one last chance to experience Green Horizons, a landmark exhibition exploring the concept of environmental sustainability.

With its centerpiece a giant painting that depicts Brooklyn after millennia of global warming, the exhibition has been in place since June at the museum.

Green Horizons presents prominent artists from Maine and the world in an adventurous attempt to provoke conversations around the questions: What is green? What is sustainable?

This dynamic project transcended traditional exhibition practices to include collaborations with writers and choreographers — including participants in the renowned Bates Dance Festival — and reached outside the museum walls to site-specific works such as a fruit orchard planted last spring in downtown Lewiston.

Sponsors of the exhibition include the Synergy Fund, the Maine Arts Commission and the LEF Foundation. Admission to the exhibition and to museum events is open to the public at no cost. For more information, please call 207-786-6158 or visit the museum’s Web site. 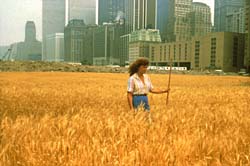 “The word seems to be overused — used for marketing, to convince people of things, to make people feel better. There’s a certain amount of hypocrisy connected to its use,” he said. “So we wanted to bring forth works of art that questioned sustainability and created a conversation among the many disciplines of a liberal arts college.”

“Rather than us having a very defined vision and going out and making that, it’s been us talking to people about our idea and having them help us determine what vision is appropriate,” added Anthony Shostak, the exhibition’s curator and the museum’s education curator.

Here are a few examples from the exhibition:

— Images of two of Denes’ land reclamation projects, including “Wheatfield — A Confrontation,” for which the artist grew wheat on a site in New York City; 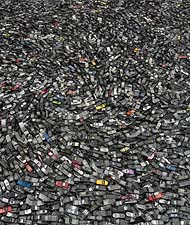 — A project in which Swiss artist Anne-Katrin Spiess documented the steps she took to render her Maine visit carbon-neutral;

— An initiative to raise awareness about trees, produced by two Bates students in collaboration with the local nonprofit Lots to Gardens, that involved the planting of fruit trees in downtown Lewiston;

— A public art project along the Androscoggin River exploring themes of community history and place-making, organized by the college’s Harward Center for Community Partnerships and a Boston sculptor;

“When people walk into this show, we definitely want to have this more cluttered nonlinear feeling,” said Bessire. “It’s going to be a huge painting, a huge garbage heap, a bicycle trying to create energy, a huge sculpture of hay, massive photographs.”

The $2 million Synergy Fund, created at Bates by donor Lee Smith, has provided major support for Green Horizons. The fund, Bessire explains, is designed to use visual culture as a catalyst for productive and probing exchanges between academic disciplines and between campus and community. While Synergy has supported other museum projects, he notes, “Green Horizons is the first major exhibition made possible by the Synergy Fund to examine its topic in such depth and breadth.”