As they advance the greening of Bates, the EcoReps know that it’s all about the visuals 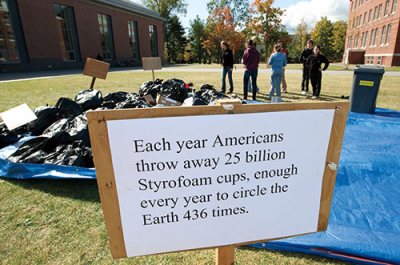 Usually we go to the landfill, not the other way around.

One afternoon in late September, though, the landfill did come to Bates. Or so it seemed. For in front of the New Commons Building, heaped on a blue tarp, appeared several dozen black plastic trash bags, rippling in brilliant sunshine and a gusty wind.

Adding authenticity to the scene was a lone seagull loitering nearby. Students en route to and from Commons also stopped to see what was going on — and to see what a group of students, Bates EcoReps, were fishing out of the trash and displaying on the tarp.

Paper, cardboard, beverage bottles and cans. Fourteen reusable plastic coffee mugs, six ceramic mugs, and a salad bowl from Commons. Duffle bags, an REI fleece vest, and other serviceable clothes.
And a Darth Vader mask. “It was the aftermath of the Eighties Dance,” said one student, referring to the previous weekend’s main festivity.

“If people see the amount of waste that they’ve made in a week that’s the best way to get through to them.”

These items, found amid a day’s worth of refuse from several campus residences and now laid out for everyone to see, all could have been reused or recycled. That was the point of this “waste audit”: to give the campus plain evidence of the need for better recycling. All told, about a third of the refuse in those bags, by volume, could have been recycled.

“It’s all about the visuals,” says Shauna Mulvihill ’12 of Lyme, N.H. She’s an EcoRep — one of the nine students working with Environmental Coordinator Julie Rosenbach to produce eye-catching, green-consciousness-raising events on campus.

“If people see the amount of waste that they’ve made in a week,” she says, “that’s the best way to get through to them.”
On a campus nationally recognized for its sustainability efforts, the EcoReps are one of several groups working to win the hearts, minds, and habits of their peers, one recyclable pizza box at a time. “We hope they’ll take the things they learn here and bring them to their communities after college, wherever they go,” says Hannah Porst ’11 of Madison, Wis.

But students join other campus environmental groups, such as the Bates Energy Action Movement and the Environmental Coalition, as volunteers. And the staff-student-faculty Committee on Environmental Responsibility is an initiative of the College administration.

In contrast, the EcoReps are on the College payroll, giving Rosenbach invaluable assistance with a dauntingly broad portfolio of Sustainable Bates programming. “They are the bridge between my office and the student body,” Rosenbach explains. The four-year-old program extends a tradition of paid student environmental employees dating back at least to the 1980s (there’s that decade again!) and Facility Services’s squad of energy auditors.

With recycling as their focus this year, the EcoReps specialize in short-term, high-profile projects. “One thing I’m trying to do is bring visible events, outreach, to the campus,” Rosenbach says. “And another is to connect with the students in a meaningful way and have them take ownership and responsibility for projects. The EcoRep program hits both.”

She has structured the program such that while all members take part in all activities, each project has a leader for outreach and one for logistics. “They’re learning how to work together, how to lead and delegate,” says Rosenbach.“They made the trash audit work, and they had ownership of it. They were like, ‘Look what we just did!’”

The students in the program, too, enjoy the benefit of being paid for work they feel passionate about, without an all-consuming time commitment. “I wanted this to be a program where anybody could walk in and learn what they need to learn,” says Rosenbach, who is proud of the diversity of interests the EcoReps bring to the program. “Then they do the project, and continue on with the other things they like to do — sports, theater, all the different stuff.”

In a social environment where students — like everyone else — are bombarded with information, policy theater is increasingly the best way to drive home a point.

The team’s other projects this year include the annual Trashion Show, a Harvest Dinner highlight in which students make clothes from discarded stuff and take it down the runway; a recycling competition, possibly against Bowdoin and Colby; a game-show-styled “trivia night”; and a campy educational video being shot by Rob Little ’12.

There are behind-the-scenes activities as well, such as a training program with the first-years centers and a collaborative effort with athletics to reduce the use of bottled water. But it’s the fun, splashy events that take priority.

In a social environment where students — like everyone else — are bombarded with information, policy theater is increasingly the best way to drive home a point.

“The trash audit was really successful because it drew people’s attention,” says Rosenbach. “We said, ‘We’re going through the trash,’ and people were like, ‘Wow, why?’ It engaged them.”

And speaking of engagement, she adds, “there is nothing like watching your friend participate in something that you don’t know about. That peer-to-peer education is really powerful.”

Being students themselves, the EcoReps help Rosenbach understand the best ways to get the word out. “They give me a lot of feedback,” she says. For instance, they told her that “we don’t read Announce e-mails” — referring to the campus e-mail blasts designed to promote student events and awareness.

“They really know what will work with their peers and what won’t work.”
Accentuating the positive is one of the things that work. “You have to get people from being naïve to being active,” without letting the immensity of environmental challenges intimidate them into apathy, Mulvihill says. “If you don’t stay positive, you’ll never change.” 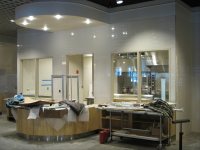