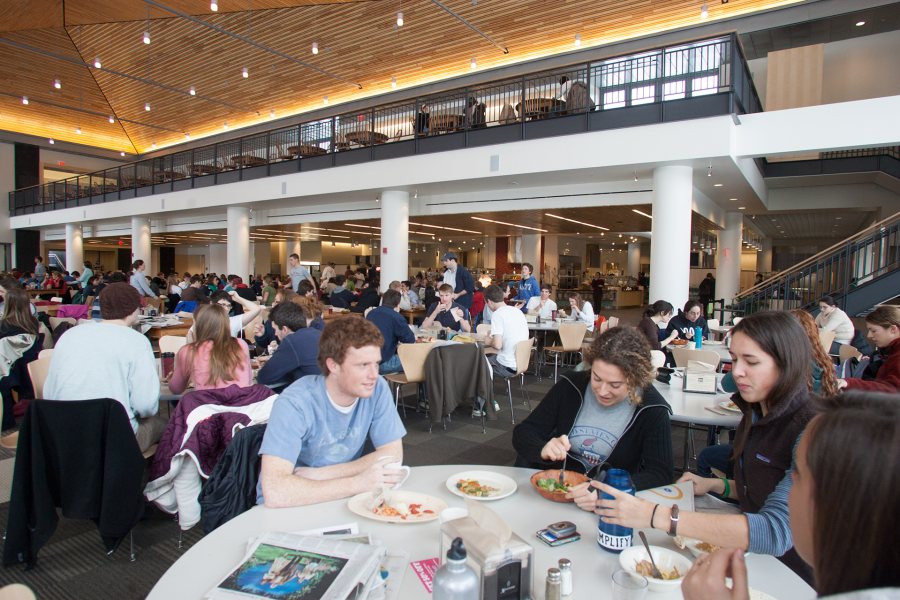 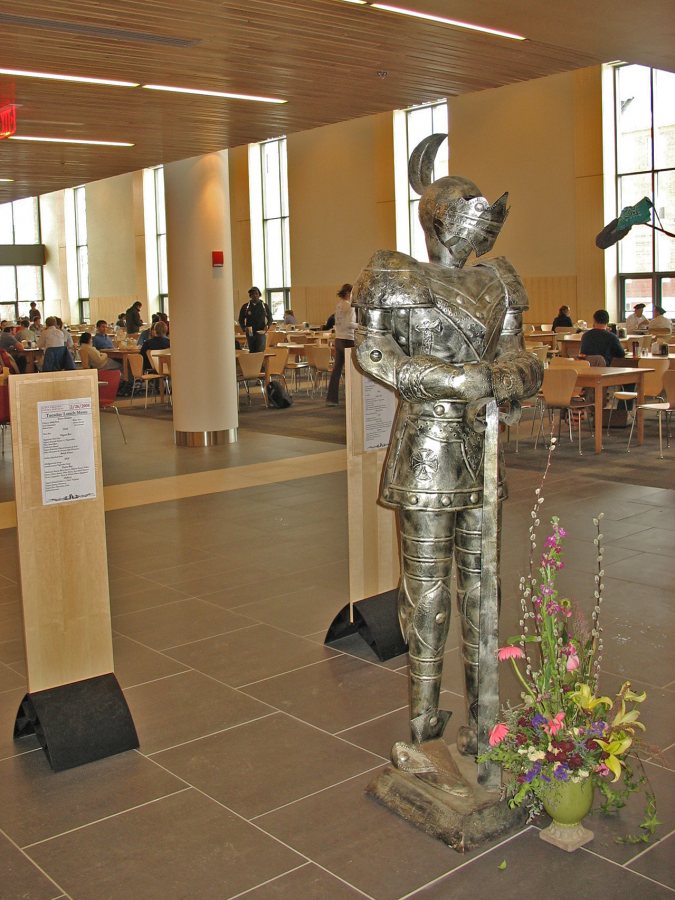 It was the first dinner served at the facility with the entire campus community back from winter break. (The Commons had served the first board plan meal Sunday night and offered a limited menu during break week.) Schwartz was pleased — and her staff, she said, loves their new workplace.

“They’ve mentioned the light, the space, all those things,” Schwartz said, contrasting the new digs with the dark, cramped, obsolete — and now closed — facility in Chase Hall.

Schwartz welcomed Campus Construction Update to her own new digs just off the sunny kitchen, an office still cluttered with just-moved stuff. Also among the clutter were housewarming gifts from Bates people, vendors and colleagues at other institutions. The gifts included flowers and a framed photo display depicting the Commons’ “soft opening” the week of the 18th.

Schwartz’s view of the opening, not surprisingly, is really two views. “If I look at the global picture, things are going really well. It’s when I get down to the day-to-day — ‘Where do the trash cans belong,’ ‘I have the wrong utensil,’ ‘I need lids for the large soup tureens’ — there’s a lot of those things,” she said. But they’re ephemeral things.

“I’m extremely proud of my staff,” she added. “They have just been gracious about working through it. There’s a lot of camaraderie, a lot of teamwork.” 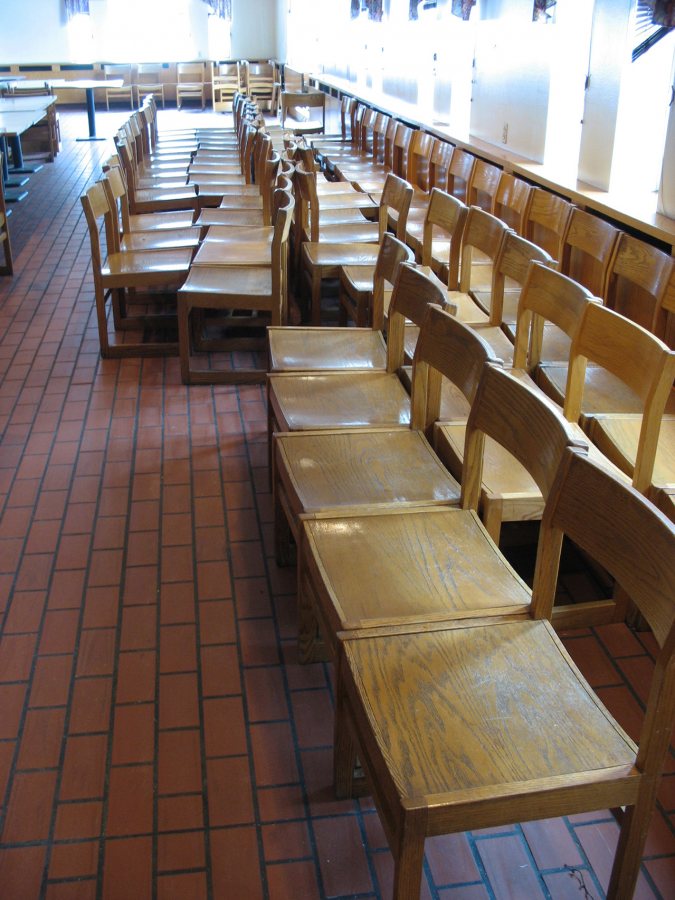 Schwartz, in fact, extended that sentiment to the whole campus. “We’d like to thank the Bates community for their support and understanding, and their enthusiasm, through the whole process,” said Schwartz, herself no slouch in the enthusiasm department. “We’re proud to be able to do what we do in such a fine facility.”

Still on her plate is the task of clearing out the old facility. The high-ceiling section of the former dining room — which, at noon on Feb. 26, was weirdly unlit and silent — is now filled with equipment whose fate Schwartz must determine.

“We’d like to get out of that building,” she said. “Besides the fact that it could have other uses, we’d like to cut the cord and be able to focus over here. So that’s our next project,” one that could last until May.

Two alums working in Maine may take some of the unwanted gear off Schwartz’s hands: Beth George ’85, whose Spelt Right bakery in Portland specializes in goods made from the grain called spelt; and Gabe Clark and Amanda Waterhouse Clark, both ’02, whose Cold Spring Ranch in North New Portland produces grass-fed beef.

Project manager Paul Farnsworth, too, was grateful to Bates for its grace under pressure during 17 months of construction on the combined Commons and Alumni Walk project. “As far as Alumni Walk went, a lot had to happen in a very busy space on the campus, and we managed to get it done in a summer,” he said. “The campus was very forgiving for the disruption of their lives, and we got it done.” 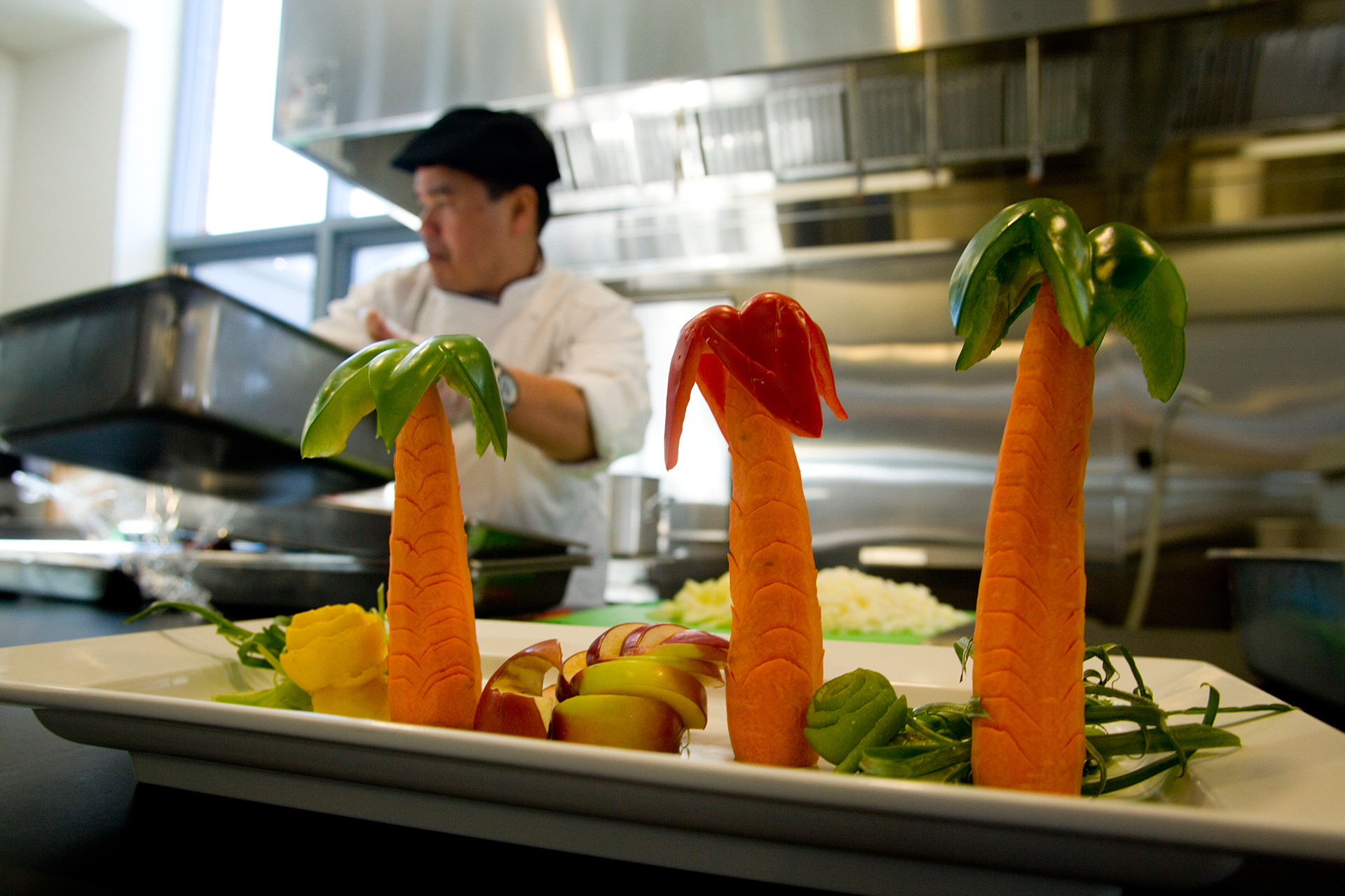 It seemed appropriate that fine dining should mark the fruition of a journey of envisioning, planning and building that began, really, five years ago, when President Elaine Tuttle Hansen launched the campus facilities master planning process. While the plan is considered more of a road map for future facilities use than a set of marching orders, it holds great promise for the future of the Bates campus — if the just-completed first phase, comprising the new student residence, Commons and Alumni Walk, is any example.

Whether or not they share Campus Construction Update’s lofty ponderings, diners seem pretty dang pleased with the new eatery. Over a noontime meatball sub and salad on Feb. 26, we watched avid customers flow into the servery to select treats dished up by friendly Dining Services staff, and then flow back out again to their seats. 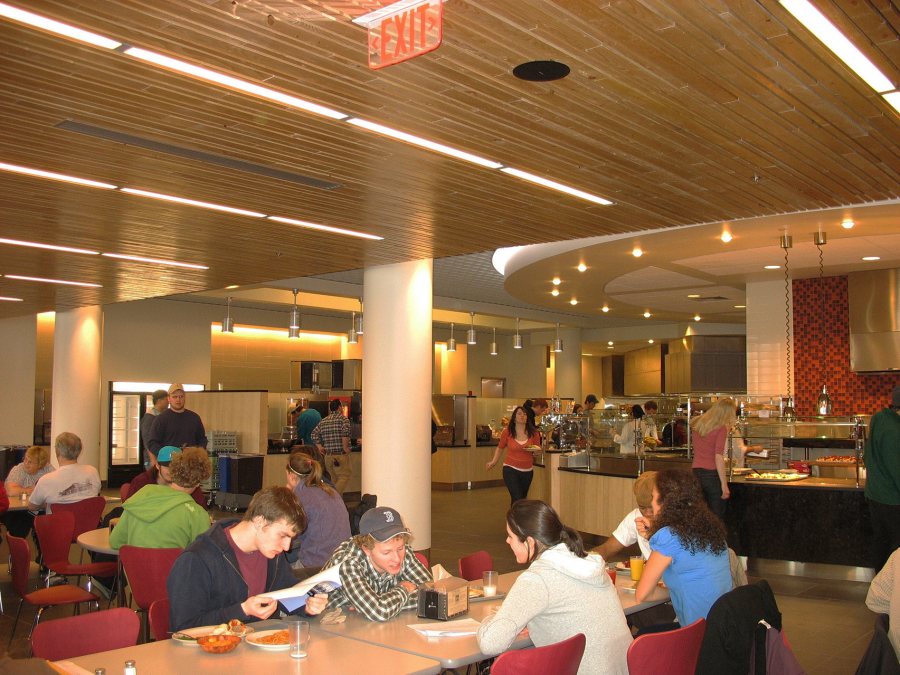 The traffic pattern is free-flowing, not linear, and the several wide lanes throughout the serving area allow plenty of room for hunting-gathering. And the social electricity in the dining hall itself had a nice wattage: The seating was dense enough to feel like a scene, man, but plentiful enough to make room for everyone. 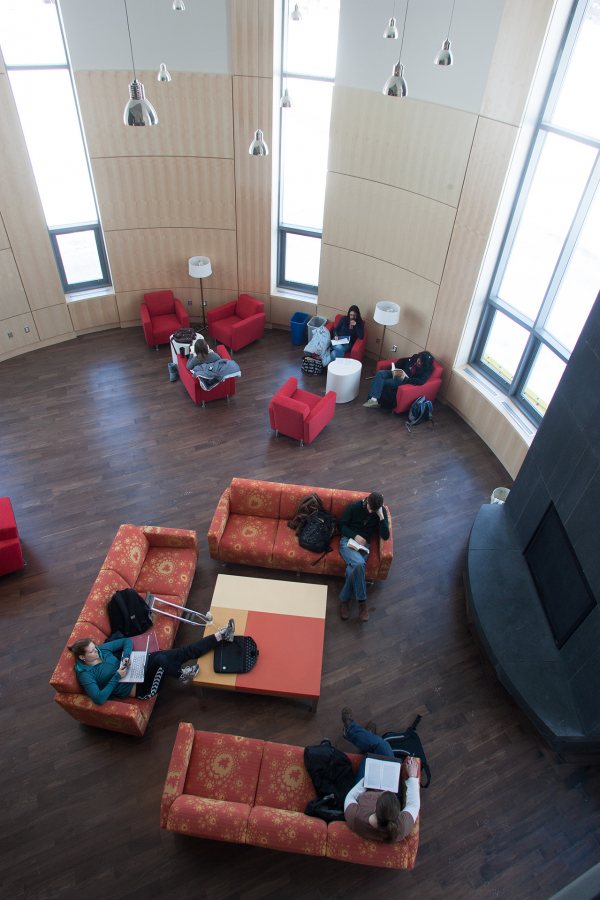 Bates life has taken root throughout the building. Meeting rooms have been put to work, as have the casual easy chairs in the second-level corridor. The Fireplace Lounge and the upstairs lounge that overlooks it have quickly became popular study spaces.

With the Feb. 28 opening of Milt’s, a store-cum-snack bar situated on the MacNaughton Arcade, virtually the whole building is serviceable, said project manager Paul Farnsworth (although the “flex dining” space across from Milt’s is still being tweaked).

There are still a few furniture issues outstanding, Farnsworth noted. The rolling bookshelves for the Fireplace Lounge have yet to arrive. The permanent chairs for the main dining hall were shipped this week to replace the loaners now in service. And eight wooden bar stools are destined to go with the high tables, which are perfect for brooding over your espresso, now in the Arcade between Milt’s and the flex-dining space.

Still to come are donor recognition markers, those plaques and signs that will honor the people who have made possible a project that, including the Alumni Walk and utilities work, will cost $30 million. 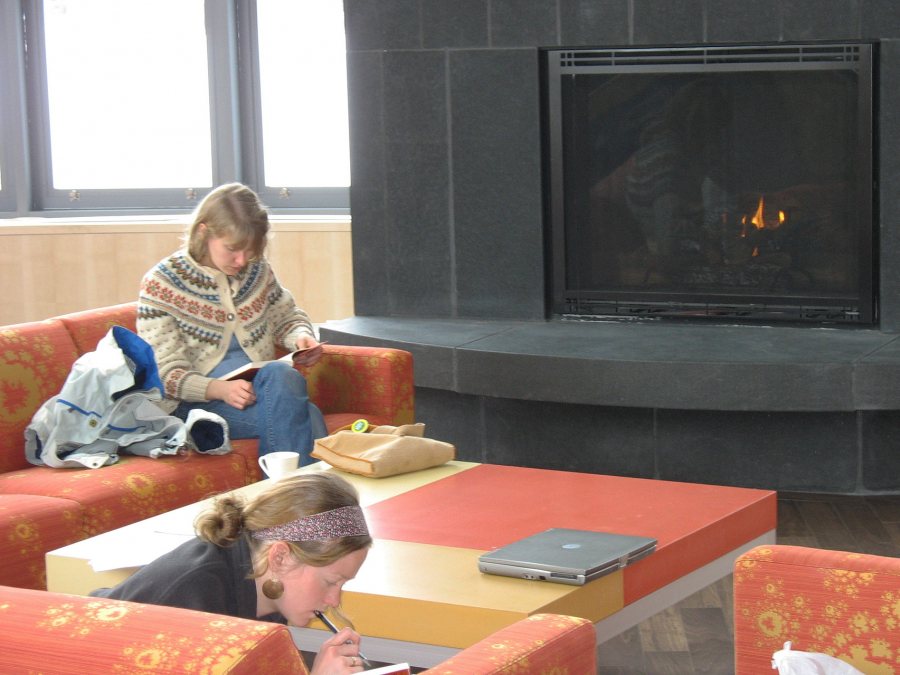 The lounge from the lounge. (Doug Hubley/Bates College)

But in terms of the actual construction work, said Farnsworth, “we’re punch-listing,” referring to the final process of inspecting, and fixing if need be, countless small construction details.

“You know, I can’t say for sure, but I’m thinking by mid-April we’ll be out of there,” he noted. “And the construction trailers will disappear next week, if not this week.” But general contractor Consigli Construction Co. will be around until the punch-list has been punched silly. 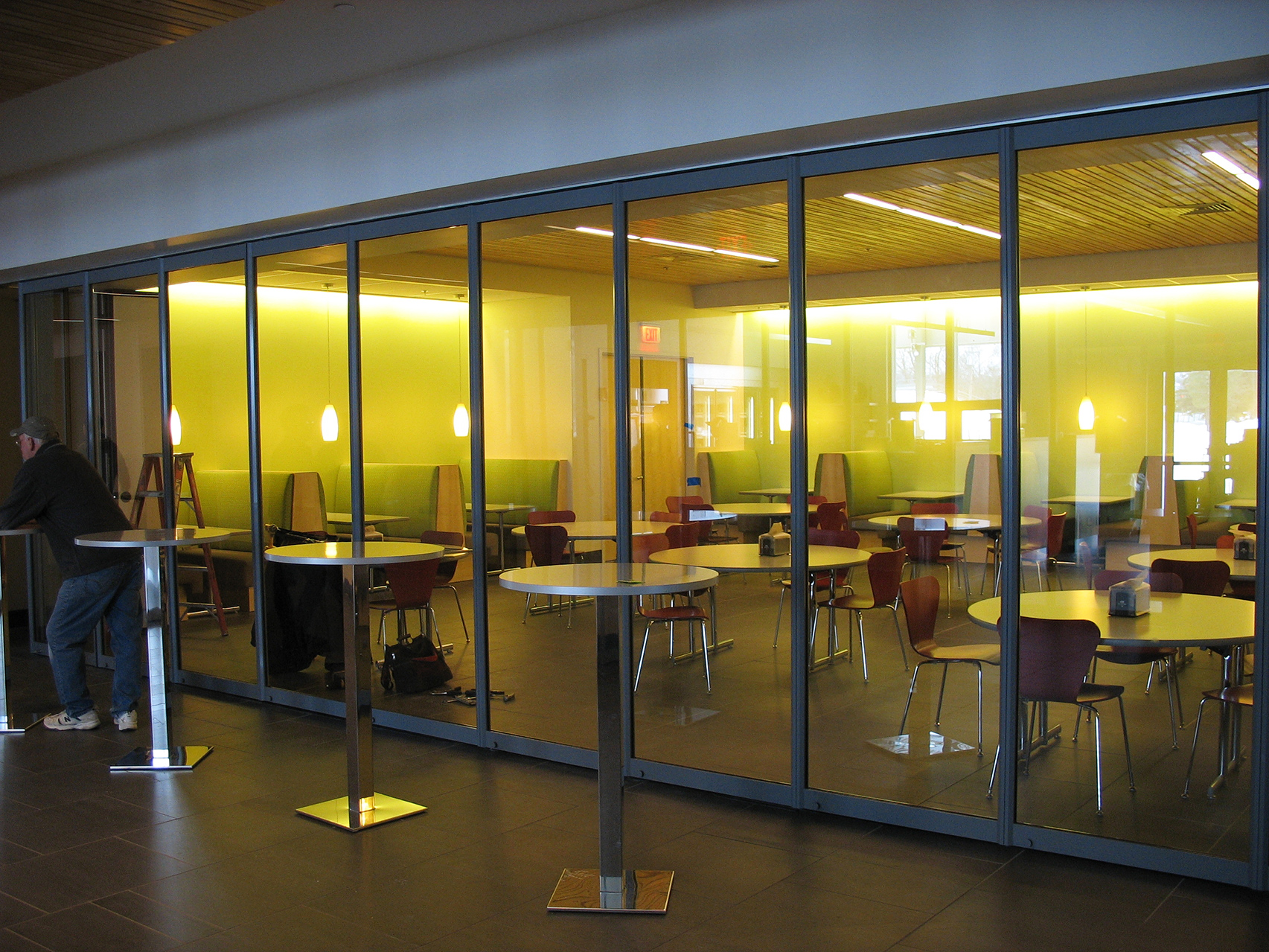 So what’s next for Farnsworth, whose life at Bates these many months has largely revolved around the Commons and Alumni Walk project? A mechanical engineer, he’s looking at replacing the air handlers at Ladd Library. And then there’s the little matter of recoating the roof of Merrill Gym.

“Not very exciting,” he said, “but something that has to be done.”

Just like the thousand or so chores relegated to the back burner since we started writing Campus Construction Update. And now it’s time to get back to them. Thanks for reading.

Our back pages: Visit the index of earlier Campus Construction Updates. 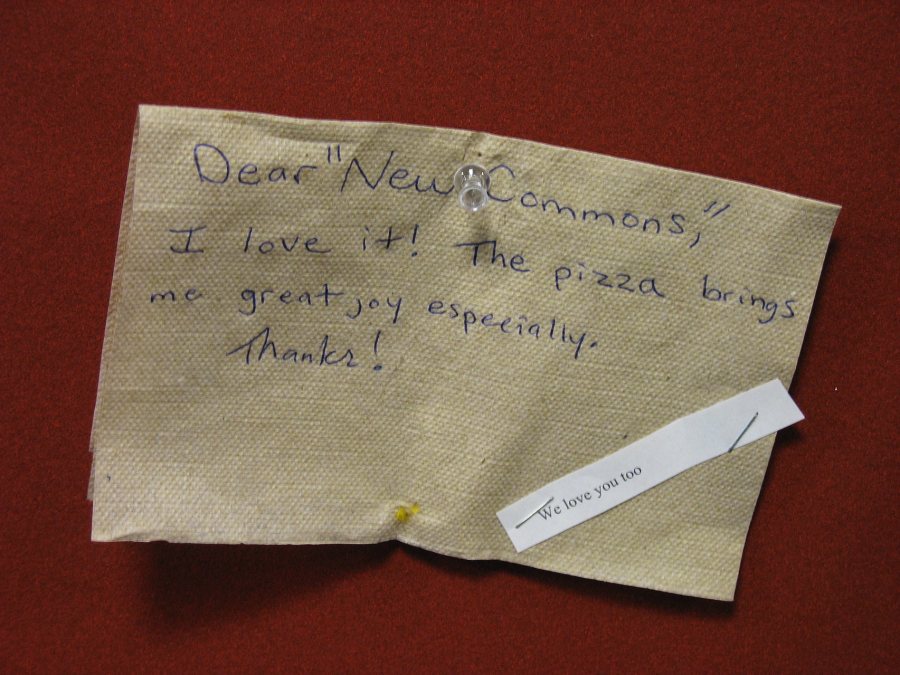 Onions and taters and kale, oh my! — It’s the Bates Garden