Considering that the Canadian National Men’s Rowing Team trains 19 times a week, it is difficult for any of the athletes to get away and spend time with family and friends back home. When 2008 Olympic Gold Medalist Andrew Byrnes ’05 let it slip that he was going to have a free day in which he would be visiting Bates, it was decided that a banquet was in order.

On Sunday, December 7th, Bates College held a banquet in Chase Hall to honor its first Olympic medal winner.  Accompanied by fellow Bates alum and rowing Olympian Mike Ferry ’97, Byrnes took the time to meet the team for a discussion about the Olympic experience and the values learned at Bates before heading to a dinner which was attended by President Elaine Tuttle Hansen, Director of Athletics Kevin McHugh, Interim Head Rowing Coach Peter Steenstra, the men’s and women’s rowing teams, and many alumni and parents.

Both oarsmen signed the Champions’ Blade, which will be mounted in the erg room at Merrill Gymnasium. Byrnes also received a commemorative oar and a two-piece framed painting. One of the pieces was created by current men’s team captain and art major Cory Sanderson ’10. 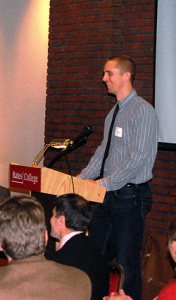 Byrnes came to Bates in 2001. He likes to tell the story of his visit to Bates during the previous winter. He arrived on the snow-covered campus at the start of February break, and other than the two captains of the rowing team who showed him around, very few students were still on campus. Most of the staff was gone and the Dining Commons in Chase Hall was closed. When the captains took Andrew to the boathouse, he was surprised to see that it was empty. All the boats were being driven to Florida by the head coach at the time, who was unable to meet with Byrnes during his visit. When the coach asked the captains how the visit went, they replied, “he’s a great kid, but there’s no way he’s coming to Bates.”

Luckily, Andrew did decide to come to Bates. The few individuals he was able to interact with during his visit (the two captains and a few special staff members) made a lasting impression on him, and he knew that if he came to Bates, he would be surrounded by good people. By the time he arrived in the autumn of 2001, the rowing team had more resources available and a long-term coach with a detailed training plan. Though the team wasn’t incredibly successful, Andrew set records on the erg that still stand to this day.

After finishing third in the coxed pair at the 2006 World Championships in Eton, England, Andrew caught the attention of coaching legend Mike Spracklen, who is the men’s coach of Rowing Canada.  Byrnes was added to the Canadian men’s eight in 2007. That crew went unchanged and unbeaten throughout 2007 and 2008. They won the Grand Challenge Cup at the 2007 Henley Royal Regatta, the 2007 World Cup, the 2007 World Championships, the 2008 World Cup, and the 2008 Olympic Games in Beijing.

On November 1st, Andrew reported back to Victoria, British Columbia, to rejoin the Canadian Men’s National Team for training.  He hopes to compete for Canada again in the 2012 Olympic Games.

Though Andrew Byrnes and Mike Ferry were separated by only four years, the pair had very different experiences while rowing at Bates. Ferry came to the college when the rowing program was only a seven-year-old club with a few lightweight rowers. His passion for the sport was developed during his collegiate years and he looked to continue rowing beyond college. Though he never learned how to scull at Bates (the club had very limited equipment at the time), he began sculling with Vesper and went on to row the USA 2x at the 2000 Olympic Games in Sydney. The crew advanced to the semifinals, where it missed making the Olympic finals by one spot. Two autumns after Ferry graduated, rowing became a varsity sport at Bates.

Mike retired from rowing following the 2000 Olympic Games in Sydney and now lives in New York City, where he hopes to get on the water more often.