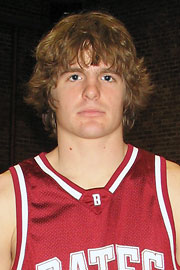 Sean Wirth moved into the starting lineup for the Bates men’s basketball team on Dec. 6 at Bowdoin, scoring 7 points to go with 8 rebounds. Since then, the 6-foot-7 forward/center from Barrington, R.I., has been the Bobcats’ primary force under the boards, averaging 9.0 points and 8.8 rebounds and 0.8 blocks per game while shooting an impressive 60 percent from the field.

Wirth earned the first accolades of his Bates career last weekend as he played a key role in the Bobcats claiming the title at the Springfield College Naismith Classic.  Wirth’s 19 points, 15 rebounds, 2 blocked shots and .545 field goal percentage in a mere 32 minutes of floor time led to a nod on the all-tournament team, along with tournament MVP and teammate Chris Wilson (Brewer, Maine).

On the season, Wirth, who is also a standout tight end on the football team, leads the 6-4 Bobcats in rebounding (6.3 rpg), field goal percentage (.600) and blocked shots (9), while contributing 6.9 points per game.