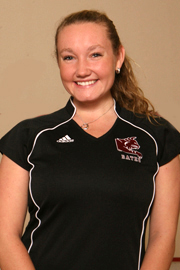 Neal, who also had a standout season on the Bates golf team in the fall, swept her opponents from Vassar, Wesleyan, Mount Holyoke and Franklin & Marshall last week, all by 3-0 scores. Dropping only three total points against Wesleyan and one against Mount Holyoke, her aggregate match score for the week was 108-3. She continued her run this week with a 3-0 win against Colby in which she again didn’t allow a single point.