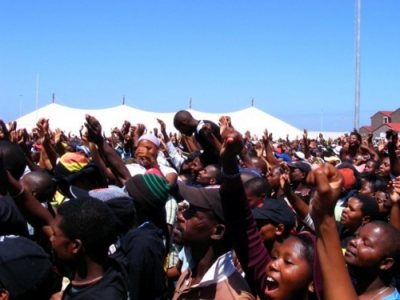 Last Sunday, a few friends and I went to see Jacob Zuma (the current president of South Africa and the president of the strongest political party, the ANC) speak at a rally. Since the national election is coming up this April, heavy campaigning has begun. In South Africa, instead of voting for one person as president you vote for an entire party, who then makes the appointment. For the first time since 1994 (the year apartheid in South Africa ended) the ANC is not the clear winner, so everyone on both sides is pretty heated about what will happen in the coming months. The rally was one of the best experiences I’ve had so far. Even though most of Zuma’s speech was in Zulu, it was great to be near so many who truly trusted this man with their own salvation. Throughout the day numerous phrases were chanted, including but not limited to: “Viva ANC Viva!”, “Viva Zuma Viva!”, “Roar Young Lions, Roar!”, “Amandla! Ngwethu!“, “JZ, JZ, JZ”. Musical artists and famous comedians within South Africa made appearances that drove the audience wild.

Along with music, dancing and comedy Zuma’s appearance was prefaced with other speakers including the president of the South African communist party. Zuma’s speech (what I could understand of it) for the most part covered the basics: healthcare, education, crime, housing, and general equality for South Africans. What I was most surprised at was the entire party’s disdain for other parties. Sure, in the States we trash talk the opposition, but not without tip-toeing around hurt feelings. Our politicians are so concerned with playing face that they never flat out say, “______  _  ____ is an idiot and has no business running our country.” At this rally though, there was no holding back on the part of Zuma and his comrades. I’m still not sure if that’s a better way to handle political beef – it seems a bit reckless. For much of his presentation, Zuma’s audience didn’t seem completely focused (side-chatter was prevalent), but when he finished and broke into his signature song, “Lethu Mshini Wami” – translated into English as “Bring Me My Machine Gun”, everyone was on their feet and attentive. The song was used most in the depths of Apartheid oppression as a popular rally cry against the inequality. Zuma has adopted it as his own to show his commitment to fighting oppression, I presume. It’s one of his trademarks. Here’s a picture of a man at the rally with his AK-47 made from ANC/Zuma posters and cardboard: 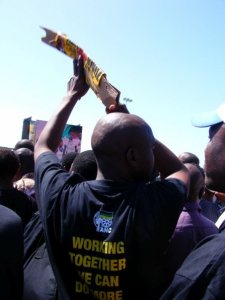 Clearly, not everyone is down with the song about machine guns; but honestly, Zuma has way more problems to worry about. He has lingering corruption and rape charges that lurk above and around him. I actually think he may be acquitted of at least one of the two, but most people (outside of the die hard supporters we were surrounded by at the rally) still associate him with the crimes, and some of the heinously ridiculous things he’s said regarding protection against HIV.

While I am unsure about how I feel about Jacob Zuma as a president, it was really incredible to be apart of a political rally of tens of thousands of people. Besides the size, it was kind of like one big party which included a good message and lots of singing. The fact that Zuma broke out in song and dance after his speech made some level of his popularity clear. He spent so much time making jokes about the opposition that had the audience rolling and closed his words with a performance. Bravo JZ, Bravo. Here’s a picture of his final moments of stage, breaking it down, “Mshini Wami, Mshini Wami”. 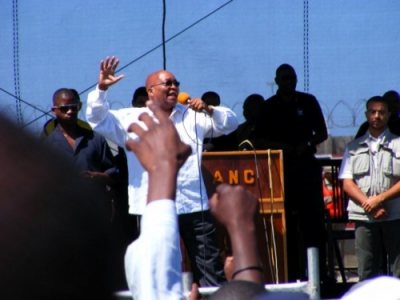 Peace and then some,

The Historical Victory: Celebrated in The Atlanta University Center