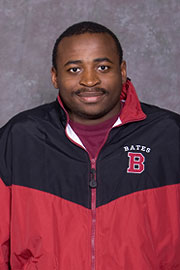 Bates first-year Candido Bousquet (Colombo, Sri Lanka) displayed terrific versatility Saturday at the NESCAC Men’s Outdoor Track and Field Championships at Connecticut College, and was one of the Bobcats keys to nipping Tufts for second place at the meet by half a point.

Bousquet earned NESCAC All-Conference honors in both the long jump and the discus throw for placing among the top three, and was also a strong candidate to claim Most Outstanding Rookie Performer honors.

Video: All-Americans and friends, these throwers ‘like to scrap a little,’ too