Mylius '11 helps lead Bates to victory — victory gardening, that is 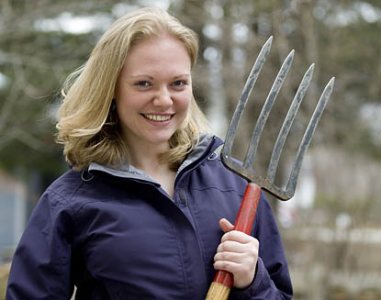 For the first time since the mid-1990s, Bates’ lush summer plantings will include a garden dedicated solely to providing food for Dining Services.

A raised bed on the lawn between Commons and Central Avenue will supply herbs to season Dining Services’ offerings. The project is the result of a Short Term collaboration between Bill Bergevin, the college’s longtime landscape coordinator, and Molly Mylius ’11, who helped Bergevin build the herb garden as part of her environmental studies internship.

The idea for a campus “victory garden” was in the air during the fall and winter, perhaps inspired by the yearlong Bates Contemplates Food initiative, which has examined issues around the nation’s food systems and Bates’ own dining and food-sourcing practices.

Mylius was among a group of students talking about a garden early in 2009. Around the same time, Dining Services Director Christine Schwartz and Camille Parrish, learning associate in the environmental studies program, were also discussing the idea.

Mylius, who is designing an interdisciplinary major around environmental studies and politics, raised the victory garden idea when she went to discuss her E.S. internship with Parrish. “I told her that I enjoyed gardening and I thought it’d be really cool if Bates had a garden,” Mylius says. As a matter of fact, Parrish replied, that idea was in the works.

Mylius knew her way around a garden when she arrived at Bates. At home in Anchorage, Alaska, her mother grows ornamentals, including native wildflowers, and all kinds of produce (Molly favors carrots and strawberries).

While heat-loving crops like corn and eggplant fare poorly in Alaska’s climate, “some vegetables do really well because of the long days,” she says. “In the middle of summer, it never gets completely dark.

“Some plants love that. Every year the Alaska State Fair even features an exhibit with world-record-breaking vegetables.”

She adds, “I’m definitely a big supporter of local food, and it doesn’t get more local than your back yard.” 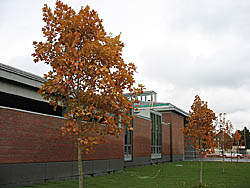 In the first weeks of Short Term, Bergevin and Mylius removed sod from a site near Commons along Central Avenue. They used heavy timbers, recycled from a fence recently removed from the north edge of campus, to build a frame for the 15-by-25-foot raised bed, and filled it with topsoil and compost.

They started planting herbs during the week of May 18. Basil and parsley seedlings are growing, dill and cilantro seeds are in the dirt and mint will go in sometime the week of Memorial Day. Once the plants get established, Dining Services staff will be able to simply step out the door and pick fresh herbs as needed.

Still in the discussion stage is a Bates vegetable garden, with a possible location being on Bardwell Street where a Bates-owned house was demolished last summer.

These aren’t Bates’ first ventures into raising its own produce. Dining Services created a vegetable garden in the yard at 161-163 Wood Street in the middle 1990s that is now used by Lots to Gardens, a community organization founded by Kirsten Walter ’00. Produce from this well-tended plot occasionally finds its way into Commons, but most is used for Lots to Gardens’ own projects.

For her environmental studies internship, Mylius has also worked with Schwartz on compiling a directory of the local vendors that supply foodstuffs to Bates. The directory Web site will feature a map showing Bates purveyors.

Her Short Term experience has taught Mylius how complicated gardening is and expanded her respect for Bergevin’s work. Also, she says, “a lot of my classes are comprehensive — a world view of problems. It’s really interesting to see them on a local level.”

“The internship is 200 hours, and so for Short Term that equates to 40 hours a week. So, it’s more hours than most Short Term classes, but it’s flexible and it’s fun,” she adds. “I get to play with dirt all day.”