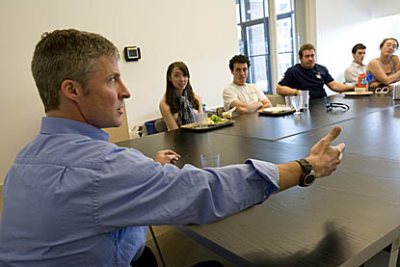 “If I wasn’t teaching this course, I wouldn’t have the time to investigate energy issues on the same level,” says Josh Henry, visiting assistant professor of chemistry at Bates.

“It’s a topic that’s been important to me since I was a little kid. But it’s such a vast problem — it encompasses economic, social, political factors, as well as fields like geology, biology, chemistry.”

Henry can pursue his investigations through a new course he designed, “Energy and Sustainability,” thanks to Bates’ Short Term. This five-week spring semester differs from the fall and winter terms in that students choose just one intensive course from a portfolio of offerings. This format is amenable to all kinds of academic experimentation, but one of its most desirable qualities is the precious time it affords for sustained concentration.

For lab work in “Energy and Sustainability,” Henry has had his students create biodiesel fuel and build an electricity-producing windmill that they tested during an overnight visit to the Bates-Morse Mountain Conservation Area.

Like Henry, Lecturer in Biology Sonya Kahlenberg has found in Short Term a chance to teach from a profound interest. She is an expert in primate ecology and behavior whose research has included eight years in Uganda studying chimpanzees. Her Short Term course, “Conserving the Great Apes,” affirms the urgent need to protect chimpanzees, gorillas, orangutans and bonobos — all species endangered by human activity.

Kahlenberg’s course explains these primates’ distinctive biological circumstances — for instance, slow reproductive rates that compound the human threat to their survival — and she involves her students in efforts to protect the great apes.

Her very first lecture laid out specific reasons for saving these animals. For instance, they play important roles in their ecosystems, such as being the only means by which certain plant seeds are dispersed. And, Kahlenberg notes, “there are moral reasons.”

“They’re our closest living relatives . . . and we’re finding glimmers of human-style intelligence in apes,” she says. “The longer we study great apes, the more we’re seeing that they actually have cultures,” in the sense that distinct groups of apes often behave in ways unique to their group.

The list of Short Term courses that reflect exigent issues goes on:

• Alexandre Dauge-Roth, assistant professor of French, brought students to Rwanda to perform an oral history project with orphans of the 1994 genocide.

• In “Immigrant Rights Theory and Practice,” another new offering, Visiting Instructor in Politics Leila Kawar asks students to explore the empowerment of immigrants through, among other means, a Maine-based service-learning project.

And then there are the courses that are, in a sense, timeless. One of these marks its 20th anniversary as a Short Term course this year: “Principles and Applications of Accounting,” taught since its inception by Lecturer in Economics Barry Farber.

The course is one of those that sees the world in terms of black and white — or is it black and red, as in ink? That is, there are accepted methods and standards that don’t change and aren’t subject to interpretation or argument, explains Christine Roemer ’10.

Roemer is a psych major and economics minor taking the course for a specific reason: She has a Ladd Internship at an investment bank in Boston this summer, and needs to be able to understand financial statements.

In typical Bates fashion, Farber wants his students to grasp the fundamentals before allowing them to take advantage of computerized accounting. “We don’t use computers at all, so it’s really all hand-written,” Roemer explains.

“If I’d taken it during the regular semester, I think I would have felt overwhelmed,” she adds. “It’s nice to be able to dedicate however much time I need to it, without other classes getting in the way.”