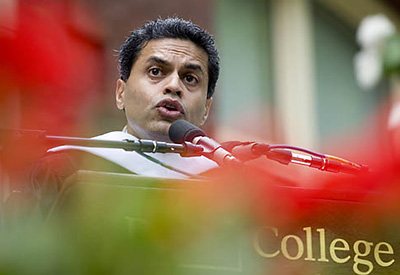 Commencement speakers mostly direct their pearls of wisdom to the graduates and their families. But this year, when author and journalist Fareed Zakaria credited the Mexican government with impeding the spread of swine flu, we wondered if experts in the audience — Bates biology professors — agreed.

Zakaria said: “We can all very easily describe the problems that the world faces…but what is always very difficult to describe is the human response to the problems.” He cited the swine flu as a hopeful example. Mexico’s rapid response, he said, “stopped the virus in its tracks.”

Hearing that statement was Bates immunologist Pam Baker ’69. She mostly agrees with Zakaria’s assessment, saying that “we owe Mexico a debt of gratitude. Isolation was effective in containing the spread of the disease within and outward from Mexico,” she says. (That success, she adds, is separate from how the disease spread worldwide, since the virus was already global when Mexico shut down Mexico City, among other actions, in late April.)

Bates virologist and microbiologist Lee Abrahamsen says that Zakaria’s statement rings especially true if one compares Mexico’s response to how other countries might react. She and Baker were among an international group of microbiologists who visited China several years ago. There, Abrahamsen asked authorities about HIV education and was told that “we don’t have HIV.” So when a country like Mexico reacts rapidly and cooperatively during a crisis, “it’s a gift to the world,” she says.

Zakaria was one of five speakers at Bates this year, a tradition begun by President Hansen in which each honorand speaks very briefly (the five 2009 talks ranged from three to eight minutes).

Associate Professor of Rhetoric Stephanie Kelley-Romano says brevity improves the product. “Only a gifted orator can pull off more than about seven minutes,” she says. Most speakers, when speaking any longer, retrench into their own area of expertise and fail to articulate “the big picture,” she says. “A short speech forces the speaker to explain how their own field is relevant to the real world. And that’s why the graduates are listening, to hear what inspired these people.”