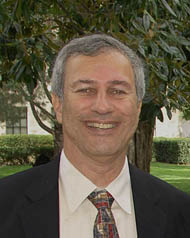 NOTE TO READERS: The following article corrects an error in the printed monthly calendar, Bates Invites You. The Nathan Lewis lecture takes place in the Olin Arts Center Concert Hall at Bates, not Dana Chemistry.

In a talk titled “Where in the World Will Our Energy Come From?” Lewis will offer insight into the use of energy resources and the implications of such use. Admission is free, but tickets are required. Contact 207-786-6135 or olinarts@bates.edu to reserve tickets. The event is sponsored by the George S. Hammond ’43 Eminent Scientist Lecture Fund at Bates.

Lewis is the George L. Argyros Professor of Chemistry at Caltech. His research interests include artificial photosynthesis, focusing on light-induced electron transfer reactions and the photochemistry of semiconductor/liquid interfaces. He also explores electronic odor-detecting sensors that mimic the flesh-and-blood ability to smell, using pattern-recognition algorithms to identify odorants.

Lewis has been a member of Caltech’s faculty since 1988, a professor since 1991 and principal investigator of the institute’s Beckman Institute Molecular Materials Resource Center since 1992. Lewis served on the Stanford University faculty from 1981 to 1988.

Lewis acquired his Ph.D. in chemistry from the Massachusetts Institute of Technology. He is editor-in-chief of the Royal Society of Chemistry journal Energy & Environmental Science. His awards and honors include the Fresenius Award, the American Chemical Society Award in Pure Chemistry and the Orton Memorial Lecture award and the Princeton Environmental Award, both in 2003. In 2008 he received the Michael Faraday Medal of the Royal Society of Electrochemistry.

He has advised some 60 graduate students and postdoctoral associates.

The George S. Hammond ’43, H’73 Eminent Scientist Lecture Fund is given in honor of George S. Hammond by his associates and students from Iowa State College under the guidance of Jay K. Kochi. The fund supports lectures by scientists specifically chosen by students and faculty in the Bates chemistry department.