Authority on Afro-Mexican citizens to speak 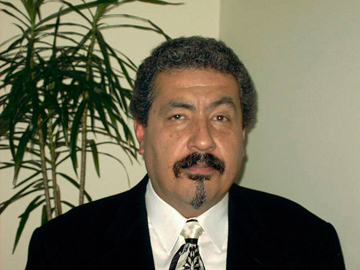 A professor of Spanish, a poet and an authority on Mexican citizens of African descent, Marco Polo Hernández Cuevas offers a talk titled Afro-Mexico 1519- at Bates College at 4:30 p.m. Thursday, Sept. 17, in the Benjamin Mays Center, 95 Russell St.

The following day, Hernández Cuevas is guest speaker at the college’s Creole Table, a series of communal meals whose discussion and menu relate to one of the world’s many Creole cultures. Open to the public strictly by RSVP, due to limited seating, the event takes place at 4:30 p.m. Friday, Sept. 18, at the college’s Multicultural Center, 63 Campus Ave.

Open to the public at no cost, the Sept. 17 talk is part of the 2009-10 Arturo Schomburg Afro-Latino Speaker Series, now in its second year. For information about both events, please call 207-786-8376. To RSVP for the Creole Table, please contact this ttaylor@bates.edu by Monday, Sept. 14.

Hernández Cuevas is associate professor of Spanish at North Carolina Central University, Durham. He describes himself as an Afro-Mexican native of Mexico City’s inner ghettos.

In 2003, he received the National Endowment for the Humanities certificate in Afro-Hispanic Literature from the Afro-Romance Institute, University of Missouri-Columbia. He has written five books in English and Spanish, including examinations of African Mexican history and culture and a forthcoming poetry collection.

The Schomburg Speaker Series, sponsored by the Office of Multicultural Affairs, celebrates the legacy of Puerto Rican historian and activist Arturo Alfonso Schomburg and his efforts to preserve African cultures in the Americas. The series highlights contemporary Afro-Latin scholars and artists who focus on topics including Afro-Latin identity, politics, culture, literature and history.

The Creole Table is a language and cultural program that meets on selected Friday evenings. Each meeting combines dinner and discussion about a particular Creole society. “Creole” refers to, variously, language, race, cuisine, religion and culture.

Creole societies, which exist throughout the world, are defined by their multicultural, multi-racial/ethnic and polyglot populations, and by similar histories of forced migration, agricultural labor, plantation economies and the creation of new languages.

These meetings explore the diversity of such cultures, their histories and current conditions. One or more attendees take responsibility for leading the discussion, and the meal reflecting the culture at issue is prepared collectively by students, faculty and staff.

Writers from Equatorial Guinea to speak