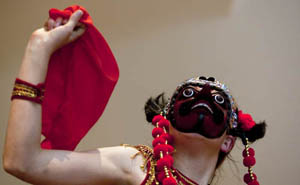 Adorned in bright red and exuberant gold fashionings, Barbara Byers ’10 stomped and feigned tears and anger in her portrayal of the Hindu demon god Ravana.

Byers was performing a “tari topeng,” a traditional style of narrative dance from West Java, Indonesia, whose characters are represented by ornate masks. Byers embodied the demon from the Hindu epic Ramayana with confident, crisp motion that meshed seamlessly with the accompanying gamelan music.

This resident of Elkins, W.V., offered the performance as part of an Oct. 7 presentation on student experiences made possible by the Phillips Student Fellowship program at Bates. Also presenting was Chomba Kaluba ’10 of Mpika, Zambia.

Kaluba, a sociology and anthropology major, used his fellowship to support volunteer work with Safe Passage, a nonprofit that supports children who survive by scavenging the city dump in Guatemala City, Guatemala.

Byers, who had never studied abroad before her Phillips adventure, told listeners at the Skelton Lounge gathering that time in a dramatically different culture nourished her deep interest in music and dance. “Being immersed in these arts infused me with a desire for a quality of sound in my work that’s strongly reminiscent of Indonesia,” she said.

The dance, she explained, was an important symbol of Indonesian identity, independence and tradition. Jingling ankle bells, swinging her sampur — a sash essential to the costume — Byers balanced a headdress and inhabited an intensely expressive mask with an ease and confidence reflecting her intense study.

Byers discovered her passion for traditional Indonesian performance as a member of the Bates Gamelan Orchestra, which performs the percussion-rich court music called gamelan. She worked with renowned Javanese musician and composer Nano Suratno during his campus residency last spring, and Suratno invited her to work with him in Indonesia.

She studied several instruments, including the suling, a bamboo flute, and the kacapi, a plucked zither. Byers also worked with artists including choreographer Pak Ahmad, who taught her the tari topeng that she performed at the presentation. 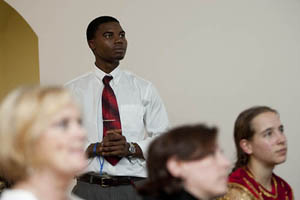 “My volunteer opportunity made me realize how my education can impact others, especially in communities with many problems,” Kaluba commented. Such experience “always helps me understand how to work with others and how to be part of a change I want to see.”

Kaluba’s presentation included footage of the Guatemala City dump, a source of income and food for many families who live in shacks nearby. The video showed young and old sorting through trash for materials that they could eat or sell. Hundreds of people forage here rain or shine to meet their daily needs. Chomba also showed clips of his teaching the children English.

Known around campus for the toy buses and motorcycles he creates from recycled materials, Kaluba shared this craft with children from the dump. This gave them an opportunity for self-expression and potential income from the sale of the toys. He also traveled to Antigua to assess consumer interest in them, and found that they appeal to tourists.

“The opportunity given by the Phillips Fellowship helped me understand how life is lived in other parts of the world,” he said. “I now appreciate things that others may take for granted. My time helping others is what makes me appreciate life most.”

Kaluba, who has launched a foundation to support literacy in remote areas of Zambia and has worked with the homeless in Maine and Washington, D.C., was named Volunteer of the Year in 2007 by the Boys and Girls Club of Southern Maine for his work in South Portland. He is currently working on a documentary that will include footage of community projects he has conducted in Guatemala as well as in Tanzania, Zambia and Honduras.

The Phillips Student Fellowship was established by Charles F. Phillips, fourth president of Bates, along with his wife, Evelyn. The deadline to apply for a fellowship for the upcoming summer is Feb. 1, 2010.