'Valence, for Whom I Testify'

­In spring 2009, Bates students traveled to Rwanda to learn from orphan survivors of the genocide in Rwanda. While visiting his former school, Ecole secondaire de Nyange, Ildephonse Majyambere tells what happened on March 18, 1997. 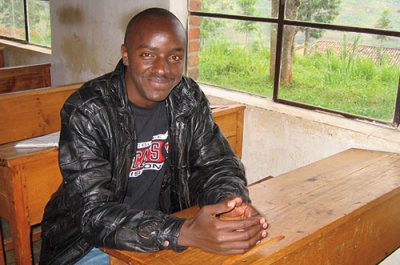 Between 1994 and 2000, former members of the Rwandan Armed Forces who had participated in the 1994 genocide and who were refugees in Congo infiltrated Rwanda to continue to kill the Tutsis and complete the genocide. On March 18, 1997, a group of infiltrators attacked the secondary school of Nyange where I studied. They disguised themselves as military from the Rwandan Patriotic Front (RPF). I was in my first year.

Most of the attackers went to the sixth-grade class, where they asked the Hutu and Tutsi students to separate into two groups. But no student moved. One killer repeated his request, becoming more and more angry. All the students then rose, all together, responding that they were all Rwandan, that they were neither Tutsis nor Hutus. At this moment the first student was killed after she recognized one of the infiltrators — she had talked with him that very morning. After that, the killers threw grenades into this classroom and into certain others.

In the fifth-grade classroom, I had a good friend named Valence who was also killed by a grenade. Valence was a former RPF soldier who, after having realized that the infiltrators were attacking us, tried to warn the others of the danger so that they could flee. When he went out of his classroom, he was killed.

I was thinking like a child, and I asked him, “But how is it possible that he be dead if his watch continues to work?”

Everyone then tried to flee. I ran outside and fell into a large hole filled with water where other students joined me. Shortly after, the infiltrators placed a machine gun just next to this hole in order to kill the students who were trying to escape. We could hear their conversations clearly.

At one point, they said that it was time to leave. We stayed in the hole until we heard our teachers speaking with RPF soldiers who had finally arrived.

We left our hiding place and went toward the classrooms. The first person that I saw was my friend Valence, lying down on the ground. Valence, for whom I testify, protected me when I arrived at this school because he was older. He held my hand and we slept together in the same dorm.

When I saw him lying down, the blood flowing, I did not want to admit that he was dead. He was wearing a watch, and his watch was still working. Later the Gisenyi prefect joined me and he touched Valence’s body. He told me that Valence was dead. I was thinking like a child, and I asked him, “But how is it possible that he be dead if his watch continues to work?”

I remember the smell of blood. Human blood has a particular scent. Each time I come back here, the image of this classroom comes back to me very clearly.

This edited English version was translated from the French by Carolyn Gallmeyer ’11.