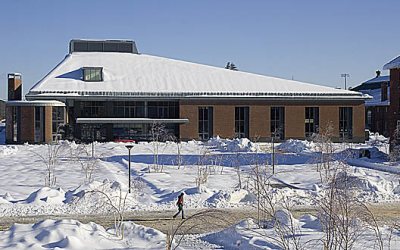 Burning biomass to provide the Bates College campus with heat and some electricity is key to the college’s new Climate Action Plan, which anticipates carbon neutrality across the Bates enterprise by 2020.

The plan proposes action steps to eliminate or offset Bates’ emissions of greenhouse gases. The proposed cogeneration plant would go to work in about a decade, as new buildings at Bates begin to exceed the capacity of the current, fossil fuel-fired central heating plant. The biomass boiler system would cut Bates’ net emissions by more than 70 percent.

The CAP also proposes that Bates continue to support electricity generated from carbon-neutral sources, such as hydropower and biomass, as it has done since 2005, offsetting what would otherwise be the college’s single largest source of greenhouse gases.

The plan envisions efficiency, conservation and educational measures to further reduce emissions; and the purchase of carbon offsets to account for emissions that can’t be eliminated.

“Nationally, Bates is recognized as a leader in sustainability, and our tradition of social responsibility and environmental stewardship is embedded in our history and campus culture,” said Bates President Elaine Hansen. “We know we are in a powerful position to lead the way in shaping solutions through education and sustainable planning.”

The plan is one culmination of Bates’ participation in the American College & University Presidents Climate Commitment. Three years ago, as one of the chief executives in the coalition’s Leadership Circle, Hansen signed the ACUPCC pledge to achieve carbon neutrality.

Both the climate commitment and the way Bates developed the CAP really represent business as usual for a college that prides itself on sustainability, sound planning and getting the most out of a dollar, says Terry Beckmann, the college’s treasurer and vice president for finance and administration.

“We’ve been committed to sustainable actions for many years and simply see this commitment to climate neutrality as a logical milestone,” she says. “We’re not expecting the campus community to take drastically different actions, but rather to continue to support decisions that make sense both environmentally and economically.”

One distinctive quality of the CAP is that Bates developed it in conjunction with a major revision of the college’s Facilities Master Plan, a roadmap for building construction and other changes to the campus layout over the next 20 years. Harmonizing the two plans enabled the college to maximize cost-effectiveness and other efficiencies.

That process has made “the Climate Action Plan an integral part of growing and updating our campus infrastructure sustainably,” says Julie Rosenbach, sustainability coordinator.

Doug Ginevan, assistant vice president for financial planning and analysis, was involved in both initiatives. “It’s been exciting to participate in such a comprehensive planning process,” he says. “By integrating sustainability throughout our planning, we have created a Climate Action Plan that’s very likely to succeed.”

In fiscal year 2009, Bates produced net emissions of 10,466 metric tons of carbon dioxide equivalents. The biomass plant would subtract about 8,100 metric tons from that total. By burning plant materials such as waste wood, such facilities recycle atmospheric carbon rather than pulling it out of the ground in the form of fossil fuel.

Meanwhile, Bates has taken such immediate actions as adopting LEED Silver-equivalent “green” building practices as a minimum for new construction. The college has also incorporated climate change and sustainability into its curriculum, outreach and other educational programs.