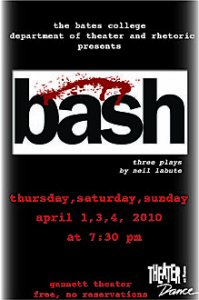 The three-in-one play Bash by Neil LaBute, a writer and director critically acclaimed for his bleak, blunt view of human relations, is the vehicle for performances by four Bates College students at 7:30 p.m. Thursday, April 1, and Saturday and Sunday, April 3 and 4, in Gannett Theater, Pettigrew Hall, 305 College St.

Bash is an evening-length work composed of three short plays: “Iphigenia in Orem,” “A Gaggle of Saints,” and “Medea Redux.” Katalin Vescey, lecturer in theater and the college’s vocal coach, directs the production, which fulfills a requirement for the performers’ independent studies in performance.

The plays depict essentially good Latter-day Saints doing disturbing and violent things. “I purposefully directed these plays on a bare stage, with harsh lighting and with no movement on stage at all,” says Vecsey, “because the power is in the text, in the voice and in the character performances.”

Bash comprises two monologues and one scene with two actors. Essentially, it’s made up of edgy and provocative 40-minute soliloquies in which the characters directly address a silent interlocutor. Ben Brantley of The New York Times describes his experience of the plays as “a transfixing evening.”

“Solo performances present a great challenge to any actor,” Vescey says. “I pushed my students really hard with these texts.

“It was worth it. I feel honored to be part of this semester-long independent-study project because LaBute’s characters on stage became brutally real.”