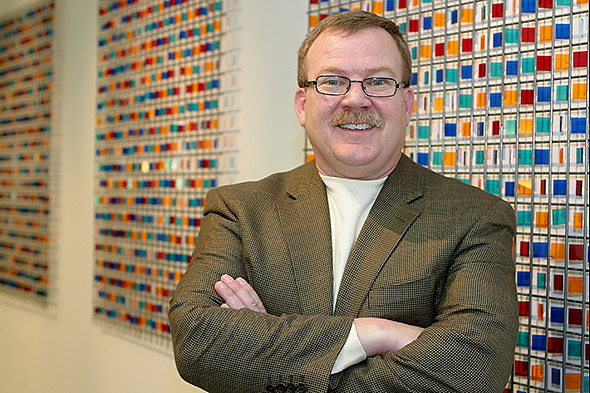 Preceding the award were remarks by Bates President Elaine Tuttle Hansen, who noted the relationship between Bonney’s capacities and values and those “that a rigorous liberal arts education promotes.”

“He demonstrates three of the most important and interrelated capacities that a rigorous liberal arts education promotes:  seeing around corners, building bridges and embracing contradictions and conflicts with generosity.”

The MassBio Innovative Leadership award honors an industry executive who represents a company with a strong presence in and commitment to growing in Massachusetts.Additionally, the award recognizes a leader who has demonstrated active support for community-based organizations and science education to prepare the future workforce, and who has fostered the creation of a positive work environment. The presentation ceremony was held at the Seaport World Trade Center in Boston March 31.

“I attribute Mike’s outstanding performance in both for-profit and not-for-profit realms, of course, to his education and leadership experience at Bates,” Hansen said. “He demonstrates three of the most important and interrelated capacities that a rigorous liberal arts education promotes:  seeing around corners, building bridges and embracing contradictions and conflicts with generosity.”

Under Bonney’s leadership, Cubist has established a corporate giving program focused on the support of middle- and upper-school science, technology, engineering and math (STEM) education — a topic for which Bonney is a vocal proponent. In addition to his role as president and CEO of Cubist, Bonney serves on the boards of trustees of the Beth Israel Deaconess Medical Center and Bates College. Earlier this year, Bonney became a board member of the Pharmaceutical Research and Manufacturers of America.

During his tenure at Cubist, Bonney created a successful and innovative business model to support the development and commercialization of novel therapies that improve health and save lives. Under his leadership, Cubist completed development of and launched Cubicin (daptomycin for injection), which is now in its seventh year since launch in the U.S. It continues to track as the most successful intravenous  antibiotic, in dollar terms, in U.S. history.

To support its growing pipeline of additional therapies, Cubist has grown its employee base, from 194 when Mr. Bonney became CEO, to more than 600 today. In addition, the company recently received approval from the Town of Lexington to add an additional 110,000 square feet of lab space at its Lexington headquarters.

In her remarks, Hansen said she valued Bonney’s “sharp peripheral vision” in his work on the Bates Board of Trustees.

“He has proven to be a quick study of our industry, never trivializing or dismissing the way we do business in academe but at the same time bringing his experience and insights as a corporate CEO to bear on our challenges and helping us, for example, become more strategic thinkers,” she said.

“In the particularly threatening seas of the last 18 months or so, Mike has also been adept at maneuvering his fellow trustees through potentially destabilizing differences of opinion by inviting all ideas to be heard; acknowledging the realities of uncertainty, confusion, and high stakes; and then setting us on the most promising course.

“Educating students in the liberal arts and sciences has always been an exciting business, and now more than ever it’s both critical and high risk.   Mike has been extravagant in both his passion and his ambitions for Bates College.”

In prepared remarks, MassBio President and CEO Robert K. Coughlin said that “Mike is truly committed to supporting each and every aspect of the biotechnology ecosystem here in Massachusetts, and Cubist`s success under his leadership has been a shining example for biotech startups around the world. From his work in STEM education and workforce development, to his passion for policy and advocacy, Mike is a shining example of the values behind the biotechnology industry.”