Commencement message: Don’t compare yourself to others, says journalist Pauley 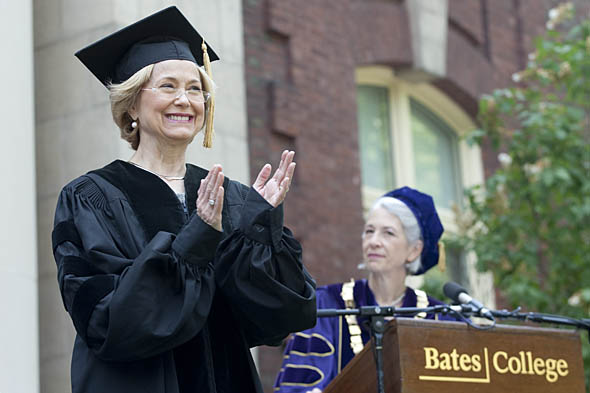 “I saw this headline,” renowned television journalist Jane Pauley told the 455 members of the Bates College class of 2010: ” ‘Inspiration is everywhere, but you have to be looking.’

“Congratulations, and may you find inspiration everywhere you look.”

Pauley was one of five honorary degree recipients at the College’s 144th commencement ceremony, which began at 10 a.m. May 30 on the historic Quad.

The other honorands were Rennie Harris, the choreographer who brought hip-hop to mainstream dance; James McCarthy, a scientist recognized internationally for helping to communicate the science of climate change; Elizabeth Strout, a 1977 Bates graduate who won the Pulitzer Prize in fiction last year for Olive Kitteridge; and Teresa Woodruff, a researcher responsible for groundbreaking research in caring for women who will become infertile due to cancer treatment.

Always uplifting, the ceremony this year had a conversational, convivial spirit, as presenters on stage passed laughs around, friends and families jostled for camera angles and cheered on their graduates, and the breeze shook loose maple seeds that came glittering down like confetti in the sun.

In her welcome, Bates President Elaine Tuttle Hansen looked back four years to the convocation ceremony that was her first address to this group of students. Joking that she “felt fairly confident that none of you remember what I said” on that occasion, she recalled her theme on that day in 2006: the value of the skills of listening and questioning.

“Four years later,” Hansen told the students, “you have not disappointed my expectation that at Bates you would develop into the incendiary listeners and tough questioners that the world needs.”

Harris, the Philadelphia choreographer, has proven to the world his conviction “that hip-hop can transcend boundaries of race, religion, gender and economic status,” Bates trustee Geri FitzGerald said in introducing him. “He has transformed not just the art of dance, but our very notion of what art is and where it comes from.” 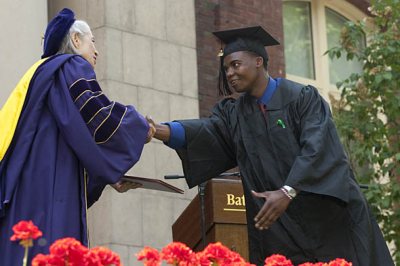 In his remarks, Harris offered insights distilled from his decades in making dance. “Movement is the last manifestation of your reality,” he said. “What you do is who you are, not what you say.”

He also asked the students to remember that we are in this life “to understand love on many, many levels” — and that being so, “remember when you’re looking down at someone . . . make sure your hand is reached out to pull them up.”

Saying that a discussion of climate change would take him at least an hour instead of the five minutes allocated for each honorand’s talk, McCarthy instead borrowed a page from the script of the 1967 film The Graduate.

He cited the famous scene at a graduation party at which young Benjamin Braddock is offered a single word of advice: “plastics.” But the solitary word that the Harvard researcher held out to his Bates audience was, instead, “boundaries.”

He asked the Bates graduates to reflect on the boundaries they have sought out and crossed in their time here, discovering new interests and abilities, and a newly expanded sense of the human family. By pausing at the boundary between different worlds, he said, we can understand the commonalities between those worlds.

“This can be an extraordinary opportunity for creativity.”

Pauley, one of the best-known female broadcast journalists to emerge during the 1970s, exhorted her audience of exceptional achievers to always judge themselves fairly. She warned against the pitfall of comparing oneself unfavorably to others — a bad habit suffered by Pauley herself and, as she related, by writer Mark Twain. 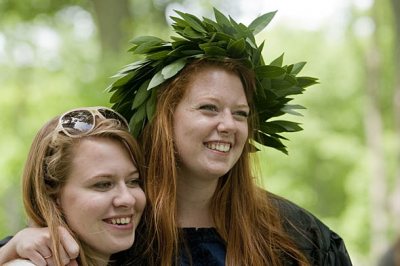 Later, with a story about some advice that helped children’s book creator Maurice Sendak create the popular Where the Wild Things Are, Pauley asked her listeners to focus on their abilities, not shortcomings. “How often we get hung up on what we can’t do,” she told the seniors. “Think about what you can.”

Strout, who also wrote the best sellers Amy and Isabelle and Abide With Me, was introduced by college trustee David Foster, a Bates classmate, as the “most spectacular member of the class of 1977.”

Referencing the Bates tradition of plunging through a hole in the ice into the campus pond in the dead of winter, Strout called this occasion “a big-deal Puddle Jump day.” But her remarks in other ways, too, gave the alumni-to-be a bracing splash of rhetorical cold water.

She described, first, a doctor she knows who vows never to help with a medical emergency on a plane, lest the outcome be unpleasant. And second, a man taken ill on the roadside being looked after by numerous passers-by.

“The best part of what waits for you is that liberating prize of life, those remarkable moments when we understand that we are not the most important person in the world,” she said. “The man on the side of the road is. The person on the airplane suffering is.”

She concluded, “Look forward to that relief of not being the most important person in the world, and you really will be all right.”

Woodruff drew lessons for her audience from the transformational outcomes for women and families that have resulted from her research. “Create your opportunities” rather than passively responding to circumstances, she said. Remember the value of teamwork. And above all, maintain your optimism even in the face of seemingly intractable problems.

“You have a world of possibilities awaiting you.”

Of the 455 seniors that Bates graduated Sunday, 241 are women and 214 are men. Forty-nine graduates come from Maine, and 28 of the United States were represented in the class. Twenty-six of the graduating students come from other countries.

Psychology was the most common major among the class of 2010, with 55 graduates. Economics was a close second, with 54 majors, and politics was the third most popular, with 47. Twenty-nine women and 20 men took double majors. Two women and one man took three majors.

Sixty-seven members of the class of 2010 earned bachelor of science degrees, with the remaining 388 receiving bachelor of arts degrees.