Filmmaker to be on hand for screening of 'Climate Refugees'

Bates will show a 2009 film that both addresses large-scale population displacement caused by climate change and questions the lack of any meaningful response to the problem at 7 p.m. Monday, Oct. 18, in the Filene Room (Room 301), Pettigrew Hall, 305 College St.

Following the screening of the 89-minute documentary Climate Refugees, there will be a panel discussion including filmmaker Michael Nash and several Bates faculty members. For more information, please call 207-786-6289.

A climate refugee is someone displaced by climatically induced environmental disasters — disasters that result from both gradual and rapid ecological changes. These include increased droughts, desertification, sea level rise and the increasing frequency of extreme weather events such as hurricanes, cyclones, fires, mass flooding and tornadoes.

The International Organization for Migration has estimated that climate change would drive a billion people worldwide from their homes in the next four decades, according to Reuters. In 2008, 20 million people became homeless in environmental disasters. The Pentagon now considers climate change a national security risk, and the term “climate wars” has become common currency in Washington, D.C.

Nash traversed the globe for two years capturing the suffering of cultures whose very survival is challenged by effects of global warming. The film depicts the dire circumstances of these climate refugees.

Among the cases examined in the film are the South Pacific’s Tuvalu Islands, threatened with obliteration by rising water levels; drought-affected regions of Sudan; storm-susceptible coastlines of Bangladesh; and rapidly expanding deserts in China that are forcing mass relocations.

Nash was inspired to make the film after reading a study by the United Nations University stating that there are currently more environmental refugees in the world than refugees from political or religious persecution. “I just thought that was crazy,” says Nash.

The film includes testimonials from politicians, scientists, relief organizations and authors who call for new policies and new cooperation to find solutions for this crisis. The United Nations held a private screening of the film for world leaders and scientists at the 2009 Climate Conference in Copenhagen.

Sherri Quinn of National Public Radio called the film “a resounding wake-up call for every human being to go green immediately. It is a must-see film that puts the human soul in the science of climate change.” 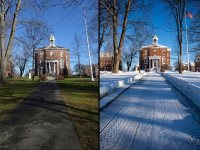 Slideshow: Balmy Bates in December prompts the question, what’s up?