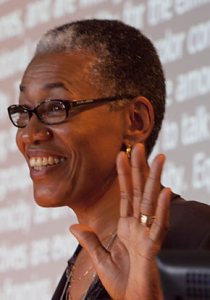 Quiz: What institutional change in higher education was implemented quickly and sustained successfully?

An audience filling Chase Hall Lounge on April 28 ventured a few answers — Title IX, the G.I. Bill — to the question posed by Alma Clayton-Pedersen, keynote speaker at the college’s fourth presidential symposium. Good tries, said Clayton-Pedersen. But, she pointed out, the most comprehensive, durable and unquestioned change has been the adoption of information technology.

And that transformation should be a model for the effort to put diversity at the heart of the academic mission.

“We would be lost without technology. I want us to think of excellence, diversity and inclusiveness in the same way,” said Clayton-Pedersen, current senior scholar at the Association of American Colleges and Universities and the association’s former vice president for education and institutional renewal.

Clayton-Pedersen provided an energizing start to the symposium convened by President Elaine Tuttle Hansen to address issues of campus diversity and inclusiveness.

She said, in essence, that it’s time for academe to stop tinkering around the edges and, once and for all, effect thoroughgoing institutional change, both in the interest of human equity and because diversity is essential to an excellent education.

“The point of higher education, in my opinion, is to help students, and we hope faculty, to have fulfilling lives, a fulfilling vocation,” she said. “Something you will go to the ends of the Earth for, like I feel about this work.” 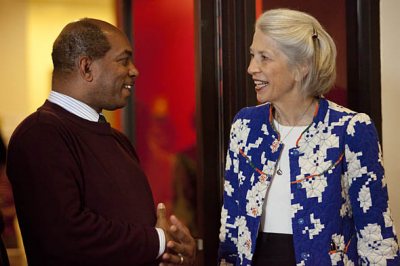 But in a climate where prejudice is still a reality, she asked, “how do we instill that passion if students are constantly struggling with what it means to be who they are?”

In addition, she noted, the skills and awareness that employers expect to find in college graduates include some that are nourished directly by an education rich in exposure to diverse people and cultures.

Higher ed has done a “fairly good job” of increasing diversity among students and faculty, and representing it in the curriculum, she allowed. But “fairly good” isn’t good enough. Though often effective on their own terms, diversity initiatives are typically scattershot and uncoordinated. And that reflects on the typical institutional structure itself — compartmentalized and uncollaborative.

Clayton-Pedersen said that academic institutions need to break down the silos and declare that learning and diversity are the common ground for the enterprise. For instance, in every search for new faculty or staff, she suggested, the candidate should be asked, “What has been your experience with communities of color?”

“If you never ask that question,” she said, “you continue to replicate yourself” instead of progressing. 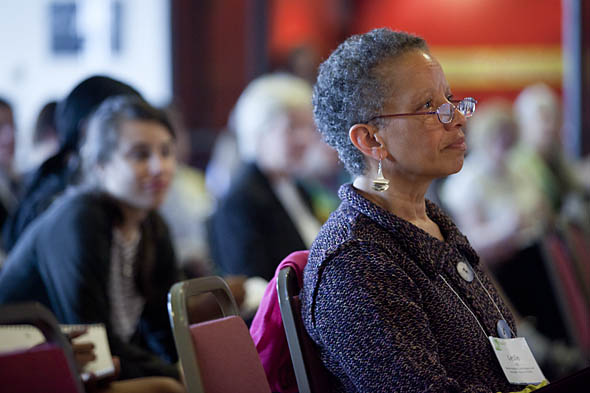 She asked her listeners to consider a new understanding of diversity that transcends race and religion to encompass all manner of individual and group differences. We need, she said, to “value our differences in all their manifestations” — and to take personal responsibility for eliminating inequities based on those differences.

She concluded by asking her listeners what challenges they foresaw in implementing such a comprehensive change in the way colleges do business. The exchange gave her the opportunity to debunk a fundamental obstacle to the advancement of diversity: the belief that opening the gates to campus means lowering academic standards.

In fact, she said, “it raises the chances that students will be prepared for the 21st-century world.” 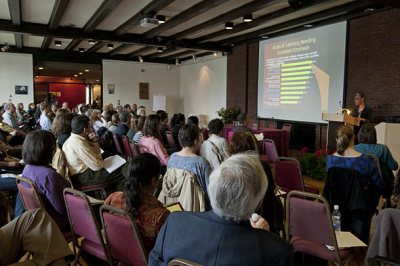 Introducing Clayton-Pedersen was Leslie Hill, a key organizer of the symposium, associate professor of politics and special assistant to President Hansen for issues of diversity. Nancy Cable, vice president for enrollment and external affairs, welcomed the gathering with an 1868 quote from Bates second president, George Colby Chase:

“It was the aim of the founders [of Bates] to establish a community in which the rich and the poor, the highest and the humblest, mingle together on equal terms in a spirit of excellence and mutual helpfulness.”

Titled Recognizing Change, Preparing for the Future: Developing Partnerships for Academic Success, the afternoon symposium explored the advancement of diversity in higher ed. Panels following Clayton-Pedersen’s keynote address looked at the issue from angles including the role of staff, the impacts of extracurricular activities — and the impact of the college experience itself on students’ understanding of diversity.

Explaining how to be an ‘antiracist,’ Ibram X. Kendi rattles conventional wisdom