Open to the World: Spain, ‘down the Plains’ come to Maine as poetry fest begins 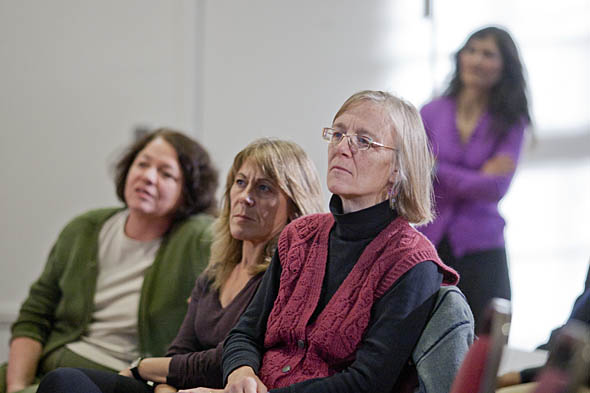 From left, Mary Rice-DeFosse, Francisca López, and Jane Costlow listen as Rhea Coté Robbins reads one of her poems.

It had to be said: Sometimes, “something gets found in translation, too.”

This truth was stated during the opening of Translations: Cross-Cultural Exchange Through Poetry, the second edition of an innovative festival dedicated to the translation of poetry, a creative act every bit as demanding as the making of a new poem.

The speaker was Jane Costlow, professor of environmental studies, who welcomed the listeners filling Chase Lounge late in the afternoon of Oct. 25. If poet Robert Frost felt that poetry gets lost in translation, Costlow said, what gets found is “the beginning of wisdom”: a glimmering of our own places amidst “the vast variety of human creativity.” 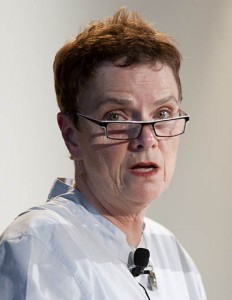 The session was the first of five readings during the festival, which runs through Oct. 29 (and includes a conference on the practice of translation). Most of the poets write in languages other than English, and the festival’s format is the simultaneous presentation of poems in both the author’s voice and English translations, created by Bates faculty and students and projected as text on a screen.

Costlow established a helpful conceptual landscape for the listeners. She situated the festival in the context of the week’s Open to the World: Bates Celebrates Unbounded Learning events, marking the renovation of two academic buildings that are, as she said, “devoted to the study of language, culture and our complex ethical relationships to each other and to the more-than-human world.”

And Costlow suggested that the meanings of poetry are not always textual. “I invite you, for at least part of each poet’s reading, to forget about what it means, and just submerse yourself in the music.”

The music began with Coté Robbins, whose early life in “down the Plains” — a Francophone neighborhood in the Maine mill town of Waterville — resonated through her work. She was one of the festival’s two poets reading in English (the other being Bates senior lecturer in English Robert Farnsworth). Reading quickly and undramatically, she delivered more than 20 poems animated by the tensions of unattainable dreams and of class and gender conflict. 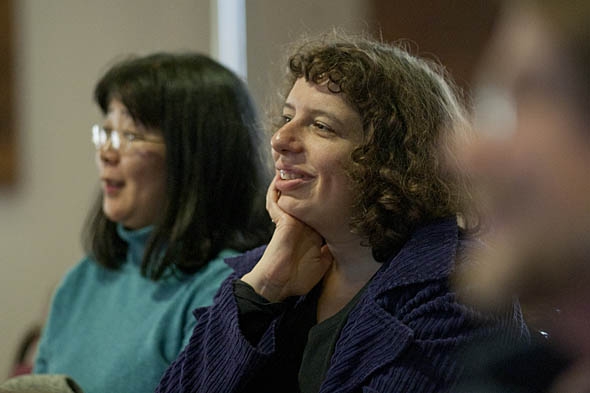 In her father’s mill the papermaking machines cook, gas, electrocute and eat the workers. The bosses in her mother’s shirt factory urge the women to work “Faster, Faster, Faster.” Women — Coté herself, Peyton Place author Grace Metalious — negotiate the visceral conflict between creative and family needs.

“We Spread the Dirt” depicts Coté Robbins and family bringing to her parents’ graves soil from France, in lieu of the homeland visit they could never make:

A native of Andalusia, in southern Spain, López writes poetry in Spanish. The festival translations of her 13 poems were created by departmental colleague and festival organizer Claudia Aburto Guzmán. 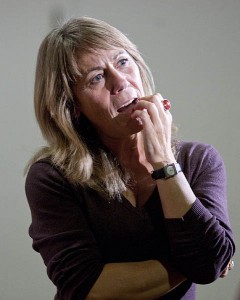 Francisca López speaks with a member of the audience after the reading.

López described herself as a rational person for whom poetry is a way to address the questions that rationality can’t touch. Where Coté’s work was markedly social and political, López’s poems were more abstract, organic, inward-looking, intimate. Her reading style, too, was softer, closer.

“Jump to the Abyss” was an attempt to make sense of a student’s senseless death:

you greet, joke, toast with someone
in the distance

for your flight
toward the encounter.

“The Soul’s Rags” could be about the people of our past who become like ghosts: “you lay dozing with me / in the silence of eternity.” “The Kiss” may describe the imbalance of power in a passionate encounter:

A senior from Pomona, Calif., double-majoring in Spanish and in women and gender studies, Jeanette Mariscal was running the Translations slide projection for the second year. Last year, she said, hearing German poet Lothar Quinkenstein gave her a whole new sense of the expressive capability of the German language.

Hearing poetry as opposed to simply taking it off the page, she said, “gives it life. When they read it, you get a better feel for their thinking.”

“In truth, poetry is as much a performance as anything else,” Aburto Guzmán remarked after the readings. “All these poets are good at that.” 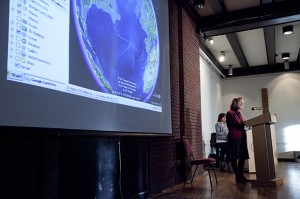