It’s a “nontraditional career progression,” says Bonney, who chairs the Bates board of trustees.

Bonney tells host Peter Howe about his first job, managing a drug store in northern Maine. “I found I spent a lot of my time in the pharmacy asking the pharmacist, ‘What’s this used for, what’s that used for?’” 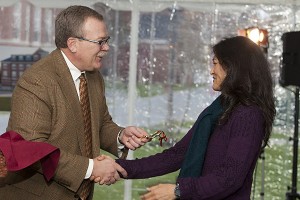 Then, Bonney took a sales position with a pharmaceutical firm that would become Zeneca, and “part of the interview process was a study guide, and we had to learn about the anatomy, physiology and biology of the systems that our drugs addressed. I liked that; I had started as a biology major [at Bates]. And I liked the people.”

Bonney spent 12 years with U.K.-based Zeneca, “and every 18 months I had a different role. It gave me a broad perspective on the industry.” He became Zeneca’s U.S. business director by 1994.

In the early 1990s, the Massachusetts-based startup Biogen was anticipating the launch of Avonex, a drug to treat multiple sclerosis. To build a national sales force, Biogen turned to Bonney. “It was a green field opportunity,” he says.

Interviewing with Biogen, Bonney says that he “really liked the technology, I liked the people and I liked the risk-reward nature of that business. I felt like I had some pretty good mistakes in me, and in that environment they were going to encourage that, to try new things.”

He held various positions at Biogen, including vice president of sales and marketing, before joining Cubist in 2002.

For Bonney, career advancement has depended less on maintaining business networks than on “not being close-minded about where opportunity might show up.”

He explains how “early in my career at those two firms” — Hannaford Brothers in Maine, then Zeneca — “I was offered what would have been considered to be nontraditional opportunities. Many of my peers would have said, ‘I don’t want to do that,’ because those jobs took you out of the silo” of a traditional path.

“I said, ‘This is an opportunity to learn something new, to have a new perspective on the business.’ That has allowed me to develop a broader breadth of understanding of how our business works, how we interact with regulators and with physicians and patients, which ultimately has been very helpful.”

How does Bonney maintain that adventurous spirit?

“I ask a lot of questions,” he says. “I am a lifelong learner and I love to learn new stuff. I will dive into any subject matter even though I have no reason to expect that I can learn it. And I try to figure out what it all means.

“Depth of experience is important. But for my money, having a broad perspective on the world is more important.”

Cubicin treats certain blood or serious skin infections, and is especially effective against bacteria that have become resistant to traditional antibiotics, specifically Staphylococcus aureus, which became endemic in many hospitals in the 1990s.

In recent years, Bonney has guided Cubist’s efforts to “build a pipeline” of new products behind the highly profitable Cubicin, both by acquiring products that “we think we have the expertise to develop,” and expanding “our internal discovery efforts to bring our own products into human development.”

In 2009, Cubist purchased the startup Calixa, developer of the antibiotic CXA-201. While Cubicin treats Gram-positive bacterial infections, CXA-201 fights certain Gram-negative bacteria. “We believe these are the next wave of superbugs,” Bonney says. CXA-201 advanced into Phase 3 trials in August.

Interviewer Howe asks Bonney if successful development of one drug makes developing another easier. “Is it a replicable process?”

“Let’s separate out discovery from development,” Bonney answers. “On the development side, absolutely it helps” to have successfully developed a drug. “We understand how to interact with regulators and what they want to see from an new antibiotic that has activity against resistant bacteria.

“On the discovery side, you’re talking about an incredibly complex set of problems that you have to deal with. I’m not sure that having one success means you will have a string of them. We have expertise, so we increase the odds, but finding new antibiotics, keeping ahead of the bacteria, is really hard work.”