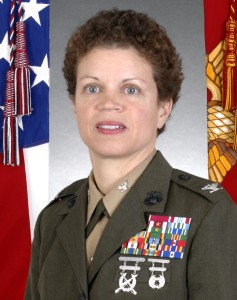 Smith’s father, Ernest Smith Jr., was one of those pioneering World War II Marines who trained at segregated Montford Point at Camp Lejeune, N.C., from 1942 to 1949.

Free Press writer Joe Swickard writes that the Montford Point Marines “endured…the demeaning belief that they didn’t have the guts, character and discipline to defend their country in combat.”

Yet they served in World War II with distinction, albeit “mainly relegated to service battalions” where they “put their lives on the line…while being strafed, sniped, bombed and blasted as the Marines island-hopped through the Pacific toward Japan.” 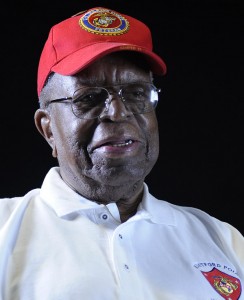 Ernest Smith Jr., a former Montford Point Marine, is the father of Marine Col. Stephanie Smith '87. This portrait was taken in August 2011 during the 69th anniversary of the opening of the segregated Montford Point training facility. U.S. Marine Corps photo by Sgt. Alvin Williams.

Now in their 80s and 90s, fewer than 300 of the original 20,000 Montford Point Marines are still alive, including Smith’s father.

Stephanie Smith, who oversees the Montford Point Project at the Pentagon, tells the Free Press that the Congressional Gold Medal should help put the Montford Marines’ story in its rightful place in Corps history.

“Their courage, perseverance and self-sacrifice” needs to be honored, she said. “These men fought and died for their country.”

The award, Swickard writes, ensures that the Montford story will “become part of the legacy instilled in every recruit going through boot camp.”

Smith recently concluded a two-year appointment as commanding officer of the Headquarters and Service Battalion for the Marine Corps Recruit Depot in San Diego, Calif. There, she commanded nearly 700 marines, sailors and civilians, receiving the Legion of Merit for her service.