The New York Times was among many media outlets reporting on the private meeting Dec. 5 between President Obama and U.S. higher education leaders, including Jamie Merisotis ’86.

Merisotis is president of the Lumina Foundation, which works to increase access to higher education. In October at Bates, he moderated the college’s Leadership Symposium on College Cost, Price and Financial Aid. 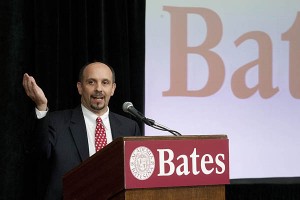 Jamie Merisotis '86, a Bates trustee and a dedicated advocate for improved access to higher education, spoke at the Bates-hosted Leadership Symposium on College Cost, Price, and Financial Aid in October.

Merisotis tells Times reporter Tamar Lewin that there seemed to be some consensus at the White House meeting that the federal government should develop policies on financial aid, its biggest tool, to spur a higher graduation rates.

Inside Higher Ed reports that the White House meeting “appears to mark a shift in policy for the administration, which will focus more on college affordability in the coming months.”