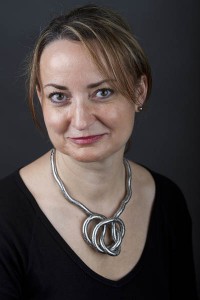 Vecsey lives in Lewiston with her husband, John Painter, and their son, Kelen. A senior lecturer in theater, she is expert in both the mechanics of the voice and the aesthetics of speech in performance.

Bates students and recent graduates nominate faculty for the Kroepsch Award, and a committee of previous faculty Kroepsch recipients selects the honoree.

“Kati inspires and demands exceptional effort from her students in a way that is purely passionate and from a place of true caring and respect,” says Michelle Schloss, a senior from Farmington, Conn. A theater minor, Schloss is executive director of the Robinson Players, Bates’ student theater company, which Vecsey advises.

“Students know that when they work with Kati, she will change not only the way they approach the world of theater, but also how they operate in the world at large,” says Schloss.

“Students adore her. Students respect her. They work hard because she works hard,” says Travis Jones, a junior from Ithaca, N.Y., double-majoring in theater and in visual art and culture.

A native of Budapest, Hungary, Vecsey was that nation’s first voice and speech teacher to be trained at the Hungarian Academy of Drama and Film (now the University of Drama and Film), completing her training in 1991. She came to Bates in 1996 and was promoted from lecturer to senior lecturer in 2011. 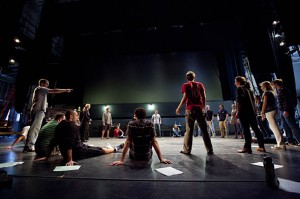 Unusual in academic theater programs, Vecsey’s role as director of voice and speech encompasses both the physiology and the expressive potential of the voice. Attending every rehearsal of every production and also working one-on-one, she helps student actors develop characterizations that support the director’s vision for a play.

First, she says, “I ask them to write a character biography. They truly have to figure out who they are on stage, and lend their own body to that character. Voice is a personality issue — so if you know who you are on stage, that biography is the first step to find the character’s voice.”

Science enters the picture when it comes to using the voice properly, in terms of both achieving a desired effect and avoiding vocal injury. Noticing one student performer with vocal trouble, Vecsey urged her to see a doctor, which ultimately led to a diagnosis of nodules that required surgery.

“It was important to point that out so she didn’t damage her voice further. She came back after the surgery and was able to do more voice work — and she ended up as a music major, singing in a rock band.”

“She’s my mentor and I feel comfortable going to her for all different kinds of advice,” says senior theater major Jennifer Flanagan of Sherborn, Mass. “She helped me decide what classes to take, get through my stressful thesis process, prepare for outside theater auditions — and she has listened to me debate what I want to do after college and where I want to go.

“She gives ‘answers’ to your problems in such a way that you end up answering them for yourself.”

In addition to writing many papers and journal articles, Vecsey wrote, directed and presented the instructional Voice Workout Video for Professional Voice Users (In Hungarian) in 2000. She is also an independent voice consultant with a specialty in working with male-to-female transsexuals.

Vecsey received her doctorate in developmental and educational psychology at Eötvös Lóránd University, Budapest, and the equivalent of master’s and bachelor’s degrees in speech and language pathology and special education at Bárczi Gusztáv College, also in Budapest. She is frequently invited back to Bárczi Gusztáv College to teach master classes.