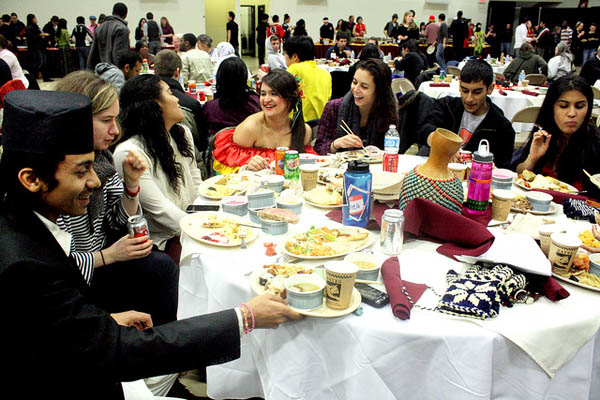 The annual International Dinner, held this year on March 3, was a feast for all the senses.

On one wall, a display of flags from around the world transformed the plain interior of the of the Gray Athletic Building. Brightly patterned traditional garb popped out in the crowd.

Amidst the murmur of happy diners, special dance performances and a playlist of international music set the festive atmosphere. And an intriguing combination of spices and scents made it impossible to forget the main attraction: the food.

This year the menu featured an impressive array of 44 dishes from nearly 30 countries. There were the familiar and delicious — two types of spring rolls from Vietnam, chicken enchiladas from Mexico and crepes from France — as well as the distinctive and delicious: chin chin, a fried donut-like snack from Nigeria and Ghana; saltibarsciai, cold beetroot soup from Lithuania with an unforgettable magenta color; and gajar ka haluwa, an Indian dish made with carrots and milk.

At the dinner, food becomes a common ground to explore, learn and celebrate the diversity in the Bates community. More than 350 people took part — students, professors, staff and local residents.

In short, “Food is a wonderful way of sharing your culture,” said Shlesma Chhetri ’12, of Kathmandu, Nepal, and co-president of the International Club, which sponsored the event.

Thailand’s red curry is a good example of the cross-cultural exchange. Over the centuries, Thai cuisine has been influenced by South Asian, Chinese and European cooking — and the fiery red chilies that give the curry its color came originally from Central America, brought to Thailand by Portuguese explorers.

But ultimately none of that matters. What does matter is the delicious explosion of flavors that immerses you in a dimension of Thai culture, sparking appreciation, interest and dialogue.

The dining is only half the story. The task of cooking food for 350 people, combined with limited equipment and space and difficult-to-locate spices, was an epic in and of itself. As Chhetri explains, “For the cooks and helpers, it is like an adventure.”

Shared pots, pans and all seven kitchens on campus, American and international classmates started cooking the night before and even made a special trip to Portland for ingredients.

For International Club co-president Hieu Nguyen ’13 of Hanoi, Vietnam, the dinner is what sparked his involvement in the club: His freshman year he made Vietnamese spring rolls and lotus soup.

Since then, Nguyen has remained committed to the club because of its “open and friendly environment and the beauty of diversity.” The ambiance and popularity of the International Dinner certainly bear that out.