A Bates senior from Athens, Greece, is one of 40 students across the country to receive a 2012 Thomas J. Watson Fellowship, a prestigious grant that supports a year of independent research abroad.

Romina Istratii, who graduates from Bates in May, will use the award to travel to Senegal, Ghana, Ethiopia and Rwanda to research the dynamics of food security, gender bias and the role of women in farming.

The Watson is designed to identify potential leaders and challenge them in ways that foster independence, a global perspective and adaptability to new cultures. It funds research that’s on a topic deeply important to the recipient and is conducted outside academe and the recipient’s home culture.

Istratii belongs to the 44th class of Watson recipients, drawn from 15 states and seven countries and planning research in 74 countries. Fellows receive $25,000 for 12 months of travel, college loan assistance as needed and an insurance allowance.

“This situation contributes to persistent food insecurity,” Istratii writes in her Watson proposal. At the same time, while existing research demonstrates the role of gender bias in putting women farmers at a disadvantage, the voices of such women are all but absent in that research, a void that Istratii hopes to address.

She will interview women farmers, academic experts and women’s rights activists. “I am intrigued to hear African women narrate their own stories and share their own perspectives,” she writes.
“The literature shows that women are crucial to food stability, but it fails to project what women think and how they see their role as forces of security and economic growth.

“Do women consider themselves equal to men? Do they feel that more egalitarian circumstances on the farm could increase the welfare of the household and the community more broadly? Do they associate their personal circumstances with food insecurity? What would they say to their governments and the extension agents that work to empower them?”

Istratii selected her destinations on the basis of unique characteristics that will inform her career objective of ameliorating food insecurity in Africa. In Senegal, she will live with a village mayor who will introduce her to the region and to female farmers, and will visit a U.S. Agency for International Development project that aims to increase female producers’ access to markets.

Next stop is Ghana, where female voices are conspicuously absent from the masses of research into food insecurity, and where members of the Bates economics faculty have been able to connect her with valuable interviewees.

In Ethiopia, Istratii will study agricultural practices in the relatively egalitarian context of the Oromo people, the nation’s single largest ethnic group. In addition to female farmers, she will interview civil rights activists, women’s empowerment organizations and journalists.

Her last stop is Rwanda, where women have been instrumental in rebuilding the country after the 1994 genocide, and where important reforms that empower women have recently been enacted. Those reforms, Istratii believes, “will have tremendous implications for food insecurity and must be studied while they are still under implementation.” 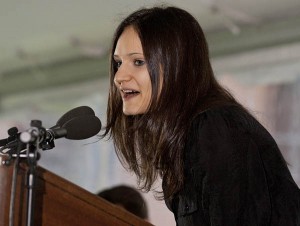 Born in Moldova, Istratii immigrated to Greece at age 4. Experiencing poverty early on, her response then and now has been to seek ways to make things better on a community scale. At Bates, she says, she found not only a responsive forum for her ideas but a community that encouraged action.

As head of the Committee on Women’s Rights for the Model United Nations at Bates, Istratii first learned of the barriers confronting women farmers in Africa. Participating in research by Bates and University of Tennessee economists, and supported by a Stangle Family Fund Grant for Research in Economics and Law from Bates, she laid the groundwork for the Watson project.

Istratii is a triple major in economics, politics and Chinese. Along with Chinese, English and her native languages of Greek and Moldovan, she also speaks French.

The Thomas J. Watson Foundation was created in 1961 as a charitable trust by Mrs. Thomas J. Watson Sr. in honor of her late husband, the founder of International Business Machines (IBM). In 1968, in recognition of their parents’ longstanding interest in education and world affairs, their children decided that the Thomas J. Watson Fellowship Program should constitute a major activity of the foundation.