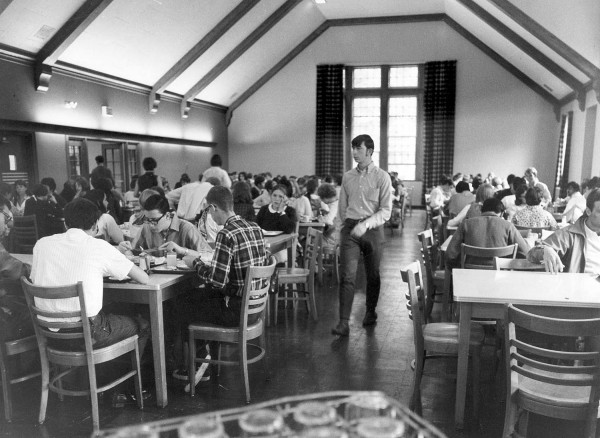 A 1967 expansion of Memorial Commons in Chase Hall paved the way for coed dining. This summer, another Chase freshening will create new student spaces — plus the college’s first pub. Photograph courtesy of the Muskie Archives and Special Collections Library.

That mealtime scene moved to New Commons in 2008, and Chase Hall, while still housing such facilities as the Bobcat Den and the College Store, became a ghost of its former self.

Thanks to Cable, though, Chase will once again feel the rattle and hum of abundant student energy. At her urging, donors have responded with gifts for refreshing the building to meet a number of student needs.

The makeover, planned for completion by early winter, will result in a pub, as well as new headquarters and storage space for the venerable Bates Outing Club.

Cable, who came to Bates as vice president of enrollment and external affairs and agreed to serve as president during the 2011-12 transition from Elaine Tuttle Hansen’s presidency to Clayton Spencer’s, has made the Chase overhaul a priority.

The need is multifaceted, Cable explains, but at the heart of it is a simple and compelling reality. There’s currently no really appropriate space for all manner of collaborative activities for faculty and students, she explains. “And the entrance to Chase, so often the first place a visitor might see, needs to be more welcoming.”

On a fast track, the project will be under way by the time President-elect Clayton Spencer moves into 204 Lane Hall, on July 1, Cable says.

The largest part of the dining hall — known by Batesies as the “Barn” or “Big Room” — could become a swing space if funds allow, accommodating myriad uses, from performances to speeches, from dance and exercise classes to simply snacking and socializing.

The Den will be expanded to include a pub — ending Bates’ status as the only NESCAC school with no campus watering hole.

Much of the makeover is about things like new lighting; wall, floor and window treatments; and furniture designed for easy reconfiguration of the space. However, some major work is needed to bring the area into compliance with building codes, including the installation of sprinklers and an elevator. And a few new doorways will be cut to help traffic flow, and old partitions removed to open up space.

About 40 donors saw the need and supported the concept, “most of them parents, alumni and trustees who care deeply about Chase and care a lot about student and faculty life,” says Cable. With planning and design work in train during the early spring, hammers are now swinging as of mid-June.

Cable also hopes that the refit will allay concerns, stirred up during the campus master planning process of the prior decade, that Chase was a goner. “Chase Hall isn’t going away — it’s too beloved by too many alumni.”

Ice out on Lake Andrews was March 19, about a month ahead of schedule.

On Oct. 25, Bates will celebrate the naming of the College Chapel as the Peter J. Gomes Chapel, in memory of Gomes ’65, author, preacher and beloved son of Bates. 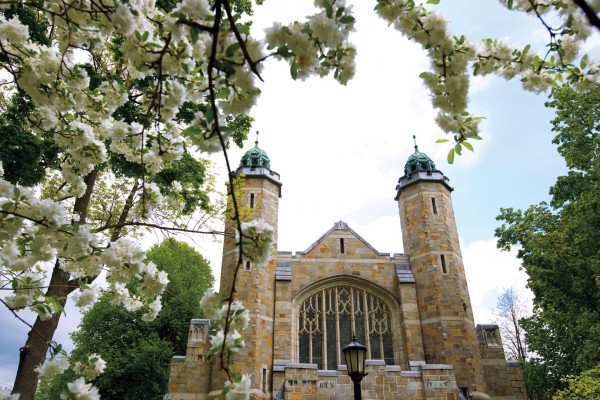 In the past year, Bates has tended to the chapel’s age-related issues, replacing the slate roof and tending to turrets, among other tasks. Though costly, slate roofing is in keeping with the college’s commitment to using slate on the campus’ most historic and visible buildings whenever possible. 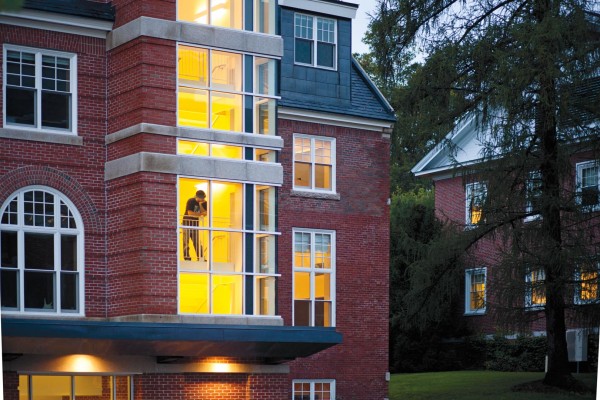