AESOP is, and was, a great jumping-off point 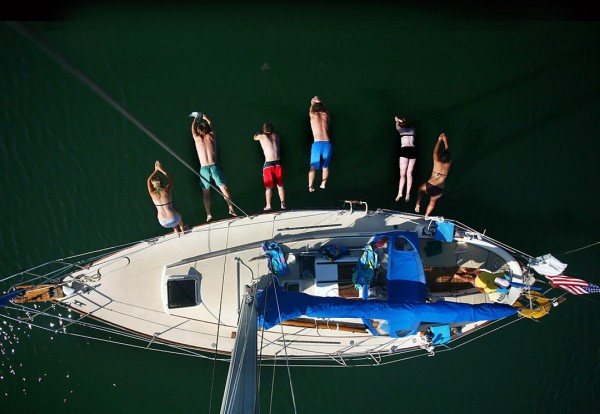 Each year, more than three-quarters of incoming students immerse themselves in the distinctive landscape of Maine — whether backpacking up mountains, exploring coastal waterways, or conducting service projects in the local community.

But as one graduate of the Class of 2012 recalls, AESOP also teaches students a little about themselves.

In late August 2008, Monica Rodriguez ’12 of Stamford, Conn., joined four other first-years and two senior co-leaders on a sailing trip along the Maine coast. Clever camera work by co-leader Lincoln Benedict ’09 created this photograph of the group leaping from the boat.

Four years later, Rodriguez is a young alumna in the world, armed with a degree in Chinese and politics. Recalling that experience on the Maine coast, she says that AESOP (the only student-run program of its size among U.S. colleges) gave her quick confidence and helped her discover her voice.

“After sleeping in a small cabin with six students I had never met before, I realized I didn’t have to be self-conscious,” she says.

During her four years at Bates, she was a member of the Brooks Quimby Debate Council and an Admission tour guide. She held leadership positions with Latinos Unidos and the Senior Gift campaign and secured internships in public service.

AESOP, she says, taught her to “step out of my comfort level and to take leadership opportunities head on.”

As she prepares to enter the Boston College School of Law this fall, Rodriguez feels ready to embrace its challenges — thanks to her rich Bates experience and a jump-start with AESOP.

Bates at Night: S’mores and more at the Bates Outing Club Lean-to